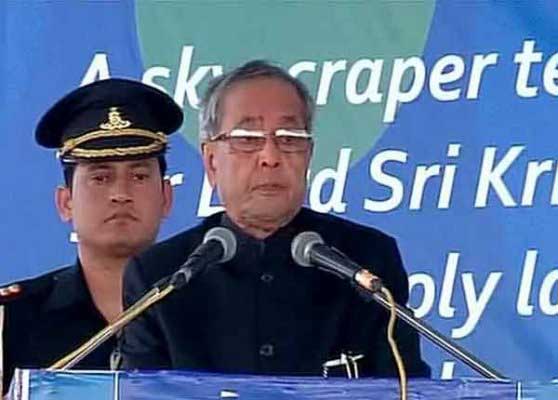 President Pranab Mukherjee, on Sunday attended a religious ceremony, the Anant Shesha Sthapana Puja, at an under-construction temple dedicated to Lord Krishna in the holy town of Vrindavan in Uttar Pradesh.

The ‘Chandrodaya’ temple, which will showcase early life of Lord Krishna, will be an architectural marvel. The foundation stone for the temple was laid on March 16 this year. President Mukherjee said India is one of the oldest and culturally rich civilizations in the world. Reportedly, the temple project is expected to get over in next five years and funds have been collected from various corporate houses and devotees of Lord Krishna. Meanwhile, Mukherjee also added that there could be no better way of doing this than spreading the Bhagvad Gita’s message of universal love and humanity. Governor of Uttar Pradesh, Ram Naik, and BJP leader, Hema Malini, who represents Mathura constituency were also present during the religious ceremony.

The full text of the speech by the President of India, Shri Pranab Mukherjee at the Vrindavan Chandrodaya Mandir. Video.

I am delighted to be amongst you in Vrindavan today. I congratulate ISKCON for conceiving a unique project of this kind. I understand that the Vrindavan Chandrodaya Mandir, the foundation stone for which was laid on 16th of March this year, shall be an architectural marvel seeking to recreate the glory and the times of Lord Shri Krishna. It shall enable thousands of pilgrims who congregate at Vrindavan every year the opportunity of experiencing new levels of spiritual consciousness.

I also take this opportunity to convey my deep appreciation and respect for His Divine Grace AC Bhaktivedanta Swami Srila Prabhupada, the founder Acharya of ISKCON, who spread the message of Krishna consciousness all over the world. A celebrated spiritualist and author, his influence continues to resonate in the hearts of Krishna devotees all over the world even today.

It was Sri Chaitanya Mahaprabhu, who, along with his disciples, first established temples in Vrindavan and led the cultural renaissance in the sixteenth century. He was instrumental in making Vrindavan the seat of bhakti and in disseminating its principles, as enunciated in our ancient texts, throughout India. I am happy that the proposed temple seeks to continue and build on this glorious tradition.

Shri Madhu Pandit Dasa, who has conceived this temple project, has aptly stated that this temple will not be just a mere edifice of concrete and steel, but a living and dynamic institution, and a center of learning and education. The Vrindavan Chandrodaya Mandir will strive to disseminate the philosophical message of the Bhagavad Gita and Srimad Bhagavatam in an easy to understand and rational manner –that message is particularly relevant for us as a society today. While we as a nation move up the developmental ladder, it is essential that our spiritual core, which forms the bedrock of our civilization, remains undiluted and strong as ever.

Ladies and Gentlemen, India is one of the oldest and culturally rich civilizations in the world. As we now make the transformative change from being a developing to a developed economy, there will be immense pressures on our socio-economic and moral fabric. It is, therefore, imperative that we reconnect to our spiritual dimensions. There can be no better way of doing this than spreading the Bhagavad Gita’s message of universal love and humanity. I congratulate ISKCON for their efforts in highlighting and propagating the timeless teachings of Lord Krishna across the world.

I am particularly happy to learn about the various initiatives that are being contemplated for the upliftment of society under the aegis of this Project, including welfare programmes for the widows of Vrindavan and the restoration, upgradation and rejuvenation of the important sites of Braj. The Akshaya Patra program through which ISKCON is providing mid-day meals to nearly 1.4 lakh children in 2160 schools in Mathura District for the last decade is a noble initiative indeed.

Ladies and Gentlemen, Srimad Bhagavatam describes the four pillars of spirituality – truthfulness, compassion, austerity and purity. Civilized societies exist and operate within the framework of these values. Lord Krishna, through His timeless teachings in the Bhagavad Gita, has shaped the intellectual, cultural and spiritual mindscape of India for several millennia. It is, thus, only appropriate that Vrindavan strives to become a world renowned center for spiritual enlightenment, from where the message of divinity and peace resonates across all humanity.

I am glad to know that Government of India and the Government of Uttar Pradesh have taken various initiatives towards making Vrindavan a hub of religious tourism. The present project adds a new dimension to these initiatives and shall hopefully generate positive spin- offs both for local society and the economy. I am confident that ISKCON will continue to partner both the Central and the State Governments in their efforts aimed at social change and reformation.

I once again wish the Project and the entire ISKCON team all success in their endeavors.