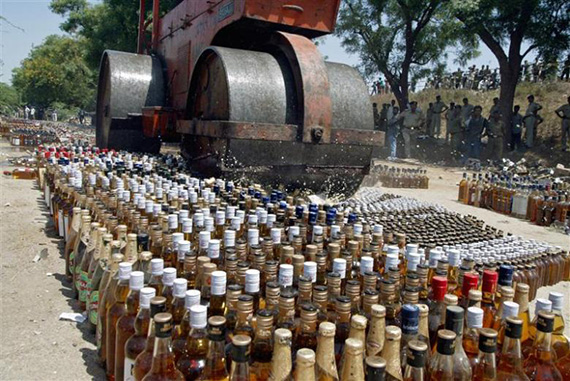 Braj-bhoomi, once famous for its milk and milk products, is becoming a hub for consumers of alcohol. Wine, beer and spirits have become favorite drinks in the land of milk and curd. Brajwasis have consumed twenty million bottles of various liquor products in last six months. The consumption of liquor has increased by hundreds of thousands of bottles compared to last year. Consumers are showing a preference for desi wine and beer over angrezi sharaab.

The numbers of pilgrims may or may not be increasing in the temple town of Vraja, but the number of alcohol consumers is increasing with each day. The government has not done anything to discourage consumption, despite the strong tradition of prohibition which was established in view of the religious nature of the land.

Instead, the government has encouraged the sale of the liquor by allowing wine shops to extend their hours. Although there has not been any licensed wine shop opened in the limits of the Vrindavan municipality, but many licensed shops are operating just outside it. Moreover illegal sale of deshi wine is on the rise in the temple town, introducing influences that disrupt the devotional atmosphere in the town and making it difficult the devotees to maintain their devotional practices.

Those who consume alcohol usually start gathering outside the liquor shops at the beginning of dusk. The closing time used to be was 10 p.m, but encouraged by the growing number of consumers, the administration extended it to 11 p.m.

According to the figures given by the Excise Department, the consumption of the English spirits has decreased, whereas the consumption of the deshi spirits and beer has increased. From details provided by the department, 152,497 bottles were consumed in the latest six-month period. These records were collected from licensed shops only; illegal and bootlegged liquor is not included.

There are many other places where unlicensed liquor is sold. The district of Mathura lies on the UP border with Haryana, which is infamous for smuggling of liquor. Estimates run to as much as 5 million bottles of illegal booze smuggled from Haryana and Uttaranchal each month, others say the number exceeds 20 million in the last six months.

With the steep increase in the price of foreign liquor, generally known as English or angrezi sharab in India, its demand has decreased. If we compare to the previous year, one lakh less bottles of foreign booze was sold in same six-month period in the district, whereas beer sales have increased to 5 lakh bottles. Similarly, there was a six-lakh-bottle increase in sales of of deshi booze in the same period.

The quality of desi liquor has also improved. According to the department, the quantity of Extra Newton Alcohol is same in both foreign and desi liquor. This is another reason why consumers are being attracted to it. It is natural that the sale of beer increases in the summer. It has become the first choice among young people, in comparison to other drinks.

Not hard to find the sharaab shop

It is not difficult to find liquor in the district. Many shops have been given license, so consumers don’t have much trouble. According to the report there are 212 desi, 178 angrezi and 156 beers shops operating in the district.

What do the figures say?