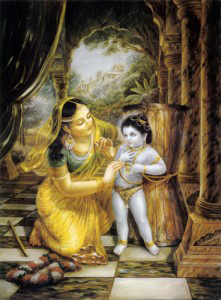 In honor of the month of Kartika, the Harmonist will be publishing verse by verse “Sri Damodarastakam” with the Dig-darsini-tika of Sri Sanatana Goswami Prabhupada.

To he who cries again and again and rubs his eyes with both his lotus-like hands; whose eyes express extreme fearfulness; who sobs again and again with quick breathing making the necklaces upon his three-lined neck quiver; whose belly is bound only by his mother’s devotion. Unto this Damodara I offer my humble obeisances.

In this verse Krishna’s lila-visesa (excellence of pastimes) is mentioned, as confirmed in the Bhagavatam thus:

(Mata Yasoda saw that) the mischievous child then cried and cried while rubbing his eyes with his hands, thereby smearing the dark eye-lining cosmetics from them. (Krishna saw the stick in her hands, and) his eyes became overwhelmed with fright. In this condition, Yasoda seized his hand and proceeded to chastise him in order to instill fear in him.1

The details of this pastime are now spoken of in the second verse, beginning with “rudantam“. Seeing the whipping stick in his mother’s hand, and apprehending being struck with it, he behaved as if terrified so that she would see his distress and think, “He is afraid of being punished.” He hoped that by her seeing this attitude of his, she would not hit him with the stick. Krishna was thinking in this way (that he would be spared punishment), and therefore “karambhoja-yugmena netra-yugmam mrjantam“—he rubbed both eyes again and again with his lotus-like hands. This is a natural characteristic of balya-lila, and indeed the normal habit of small children. Karambhoja-yugmena netra-yugmam mrjantam may also indicate that by the influence of his fright, many tears were actually forming in his eyes and therefore he rubbed them again and again in order to make the tears fall out; or furthermore, he rubbed his eyes again and again in order to wipe away the tears that were falling again and again; this is yet another meaning.

Now “satanka-netram,” dreading his mother’s punishment, his eyes expressed how much he was terrified in his mind. Satanka-netram also refers to his glancing this way and that in extreme fear. In this regard he also tries to avoid being punished; thus another confidential pastime is disclosed. Moreover, “muhuh svasena,” due to his crying and sobbing again and again, he is “kampat,” trembling. “Tri-rekhanka“—marked with three lines just like a conchshell, “kanthe stitham graivam,” all his neck ornaments, like pearl necklaces and so forth, are trembling.

“Damodaram” means “whose belly is tied with a rope.” He is described thus in the Bhagavatam: “Just as an ordinary mother binds her naughty son, Yasoda Mata considered Sri Krishna to be her own ordinary child and tied him to the grinding mortar with a rope.”2 In stating that knots were tied on the rope both to his belly and to the mortar, this indicates the particulars of Sri Krishna’s excellence called bhakta-vasyata, or his quality of coming under the control of his devotees. “Bhaktyaiva baddham” refers to he who responds only to bhakti in the following two ways: from his mother’s viewpoint, he is bound by the loving parental devotion she feels for her son; from his viewpoint, he is bound by his mother’s devotion in the form of bhakta-vasyata. “Baddham“—he willingly accepted the binding, although no rope had the power to bind him. Thus mother Yasoda eventually collected all the ropes in her household, but upon tying them together the length still came out two fingers too short to fit around his waist. This is described in the following slokas from the Bhagavatam:

While tying up the naughty child, the rope came out two fingers short, so Yasoda Mata tied another length to it. This rope also came out two fingers short, so she tied yet another length to that one; but no matter how many ropes she added, it always ended up too short. Thus she was unable to bind him, even by combining all the ropes in the house.3

Furthermore, the reason for this characteristic of the rope around his waist is bhaktyaiva baddham: he can be bound only by devotion and nothing else. By this he becomes controlled. Such is certainly the conclusion of the aforementioned description. In this connection, it is further stated in the Bhagavatam:

(While attempting to bind Krishna) Yasoda became fatigued from tying so many ropes together again and again, and she perspired as the flower garlands in her hair fell loose. Then the young child Sri Krishna saw her weariness and mercifully consented to being tied up. O Maharaja Pariksit! Although he controls the entire universe along with its highly qualified demigods, the supreme independent Hari thus displayed how he comes under the control of his devotees. Therefore this gopi Yasoda Mata received such a great benediction from he who awards liberation—a favor not granted to Lord Brahma, Mahesvara, or even Laksmi Devi herself, who sports as half the body of all the Lord’s incarnations. Bhagavan Gopika-suta, the Supreme Lord appearing as the son of a cowherd woman, is thus readily available for his devotees, yet remains far from those absorbed in severe austerities, as well as those focusing on visions of the self through intellectual pursuits.4

Because Devarsi Narada is my dear devotee, and because these two boys are the sons of my devotee Kuvera, I will deliver them in order to fulfill the words previously spoken by Mahatma Narada.5

The purport of these words spoken by Sri Krishna is that he totally depends on the devotion of Sri Narada; (being pleased with Narada’s bhakti) Krishna therefore dragged the grinding mortar and broke down the two trees in which the cursed brothers stood. This is why the Lord performs these and indeed all other pastimes (because of the love of his devotees).