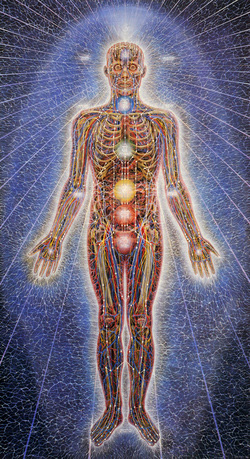 The human body is a wondrous gift. A bio machine whose technological complexity increases the more in microcosmos we dive.
The five senses have departments in our body, instruments with which we experience the World of five elements, this gross physical reality. The human body has many layers, all from skin, muscle and bones to blood veins, lymph system, the nerve system bordering to the subtle meridians and astral energy centers of the psychological body.

Mystics from all traditions around the world describe the human body to be a great blessing. A vehicle that allows us to gain full awareness of being, or enlightenment.

To have a human body means a life of trials and tests designed for the individual benefit of everyone. Our choices in life will either bring us to evolve towards a higher state of consciousness or devolve into confined limited experiences.

The Mystics of India frankly state that you are only truly human when sincere search for the meaning of consciousness becomes of utmost importance in ones life and that in accordance with sincerity in our inquiry, corresponding fullness of answer will be revealed.

We all desire to live a joyful life, yet we all must meet with suffering and death. We are all eager to expand our sphere of knowledge, yet we must eventually forget and become engulfed by ignorance.

All mystics of the world aim to solve the contradictions of suffering, death and ignorance and apply varieties of methods to regain our natural, original state of eternal blissful existence.

Just as children may sometimes be impatient to grow up into adulthood, immature yogis and shamans alike take to intoxicants to forcefully attain higher states of consciousness.

Intake of intoxicants in human culture has a history as old as human culture itself and there is a wide range of variety. Some intoxicants make you dizzy and delirious, others make you relaxed, a third stimulates your energy and a fourth brings insights and even apparent revelation. Yet in essence they all cause a shift of consciousness even though being anchored in matter through their molecular constitution.

In this article we will address the latter, psychedelics or hallucinogens such as the Ayahuasca beverage, psilocybin mushrooms, mescalin cactuses and other plants that grows in nature all over the world. These plants have a history of thousands of years of native usage in pursuit of transcendence.

We bow in respect to all sincere searchers of truth and have great appreciation for the intent of such glorious pursuits, while we humbly voice our opinion about such methods.

In modern days scientists have discovered that the pineal gland (a gland situated in between the eyes, on the location of ajna chakra or third eye) produces the active alkaloid tryptamin called DMT which is the psychoactive ingredient of the Ayahuasca beverage.

The DMT molecule is closely related to both LSD, Psilocybin and Psilocin and stimulates serotonin produce in the brain and has thus been named by neo shamans as the spirit molecule, or the molecule that ignites awareness. But serious students of metaphysics will easily discover the fallacy of such philosophy by authority of common sense alone.

Studies have shown that the mystics of the world who introspect, fast, pray and meditate have higher levels of DMT produce from their pineal gland.

No amount of objects can produce a subject

The traceable source of mothers breast milk is the hormones produced by her body when she feels affection for her child. It would be foolish to say that the milk produces the hormones and even ludicrous to claim the hormones to be the source of her noble mother feelings.

Subtle elements of the body such as DMT, hormones, semen, serotonin, melatonin, brain tissue and nerve systems are but fingerprints of consciousness in matter. All issues forth from subtle to gross and any attempt to reverse that natural unfolding must have the dynamics of reflection (looking like, yet being the opposite of). Some impatient yogis and shamans, seeking easy enlightenment, cheat themselves and enter into an external dependency on plants and eventually even lesser spirits.

During a psychedelic experience induced by tryptamine intake, whatever is there in the sub-consciousness will magnify and surface to their aware mindframe and when the ingested substance has been neutralized by the natural defence system of the body, they return to their normal state of mind, leaving any eventual realization as a vague memory of the past.

During the experience the natural protection barriers of the astral body declines and the unfortunate person may experience an invasion of subtle entities deprived of gross body yet with passions for gross sense enjoyment.

The earthbound human with his dull senses, when getting a slight glimpse of the fractal underlying encodings of this mundane virtual world, may imagine himself enlightened or even graced by gods personal presence. Yet it is but the desperate attempts of lesser astral spirits to bargain themselfes a place within his subtle body to enjoy through his organic senses.

Eventhough initially psychedelics may give us a direction and indicate that there is more to the world then what meets the eyes, we must not credit the external agent for then we shall be anchored in matter.

Spiritual pursuit through psychedelics will thus only disturb the preferred gradual, healthy progress towards positive immortality which is the initial goal of all mystics.

As a matter of fact, to credit DMT, LSD or whatever external molecule for any insight given, is a form of idol worship, or worship of matter.

Whatever realization that may come to you during such astral tourism is not intergrated in your normal sober state of consciousness and is therefore like a reflection of true spiritual realization that is gained through practical application of wisdom in everyday life.

If reflection is beautiful we better not make the mistake to credit the mirror but the true source which is consciousness, the subject and our graceful creator that resides within the whorl of the lotus in the core of our hearts. The eternal conscious embodiment of ever blooming, youthful extacy.

Go within or go without.