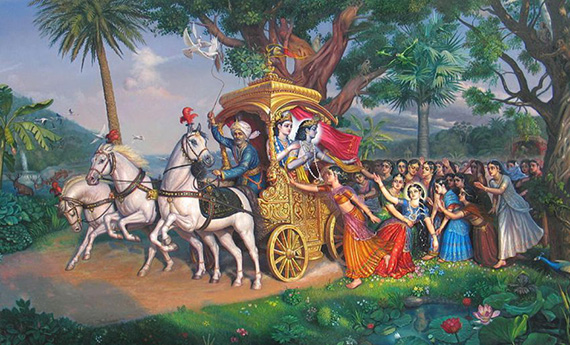 Question 1: What is the essence of sevā (devotional service)?

Answer: Sevā is not an activity or dharma of the mind or body. It is the dharma of the soul. There are no business dealings in sevā. Rather, when service is rendered solely to give happiness to Śrī Kṛṣṇa, without even slightly desiring one’s own happiness, then only is it genuine kṛṣṇa-sevā. So the essence of sevā is this: it is the unadulterated, unmotivated and uninterrupted instinct of the soul. Unless we perform such unadulterated devotional service to the lotus feet of śrī guru, it is impossible for us to comprehend the essence of Vedānta. Apart from the devotees of the Supreme Lord, none can become guru. And this is the factual truth, not merely imagination.

Bhagavān Śrī Kṛṣṇa has said, “In whatever manner someone serves Me, I serve Him in the same manner.” Devotees in kānta-rasa (the mood of a beloved consort) render sevā to Śrī Kṛṣṇa by dedicating every part of their body to Him. And Śrī Kṛṣṇa completely immerses every part of His body in that service as well. Yet, even after giving Himself fully, He considers Himself indebted to them. Hence, the absolute completion of surrender and the pinnacle of excellence in sevā exist in kānta-rasa alone.

Question 2: How will my bhakti progressively increase?

Answer: The impulse to serve (sevā-pravṛtti) will only awaken and swell by remaining engaged in service. If one has no desire at all to serve śrī guru and Śrī Kṛṣṇa, then where is the question of that desire increasing any further? If our consciousness (citta-vṛtti) remains absorbed in the lotus feet of śrī guru, then no matter where we live, our impulse to serve will swell. Otherwise, the inclination to gratify our senses and the urge to enter into mundane life will be all that swells in us. By constantly engaging in the service of sādhu and guru, all spiritual perfections will become easily accessible to us. But if we instead remain busy in preserving our mundane existence, or serving māyā, or if we are constantly preoccupied with arranging personal comforts and conveniences, then all sorts of inauspiciousness and trouble will manifest in our lives and make us restless. Apart from associating with and serving devotees, there is no other way to make our bhakti swell.

We may reflect, “I have taken shelter of śrī guru and Śrī Kṛṣṇa, but I am not the least bit interested in serving them.” If we take refuge in the path of bhakti but do not engage in bhakti itself, if we do not submit ourselves to performing various kinds of loving service to those we have resolved to worship, then what hope can we have for attaining any true welfare?

First, we must take shelter at the lotus feet of śrī guru, and consider ourselves to be laghu.* This is the sole meaning of taking shelter. The purpose of one who takes shelter is to render service by adopting the role of a servant. Yet, how have we engaged ourselves? It is only possible to reach absolute reality (pūrṇa-vastu) by offering everything we possess at the lotus feet of śrī guru. But, what to speak of giving him everything, we do not even wish to give him anything. Likewise, it is only by words that we profess to want Bhagavān and His mercy. But there is no point in trying to cheat Antaryāmī, the Supreme Soul, who knows and dwells in the heart of all beings.

How will the inclination to serve Śrī Kṛṣṇa increase if we are unable to perceive the lotus feet of śrī guru? If, even after beholding śrī guru‘s sublime lotus feet, I still maintain the mood that every woman I see is an object of my enjoyment, or if my inclination to engage in worldly life has increased, then I have surely fallen down. I could not elevate myself, so I verily remained on the lower platform. If someone has truly taken shelter at the lotus feet of śrī guru and is performing loving service to him, then, without doubt, he will gain the opportunity to serve Śri Kṛṣṇa, he will obtain transcendental knowledge of Him, his instinctive loving service will be enhanced, and he will drown in the bliss of loving service.

We should engage in those activities that diminish our urge to accumulate material objects and minimize our desire for worldly life. If we do that, the misconception that we are doers and rightful enjoyers will no longer remain. We will then be able to see that this world is meant for Kṛṣṇa’s enjoyment and that all women, whom only Kṛṣṇa is meant to enjoy, are our supremely worshipful gurus. The inclination to serve Bhagavān will only awaken when our mundane ego of being the doer and the enjoyer wanes.

So the inclination to serve will not manifest as long as our desire to enjoy worldly life remains strong and we remain totally preoccupied with worldly pursuits. When someone is eager to serve Bhagavān, he will consider himself to be the son of his guru. At that time he will no longer maintain his worldly father-son relationship. Only then will he achieve true welfare, for his residence in the maṭha will become genuine and thus he will find real shelter.

Question 3: Is it possible to engage in serving Śrī Hari by oneself?

Answer: A living being can only engage in serving Śrī Hari when the Lord Himself bestows mercy upon him. If in all the generations that came before ours, no one was able to overcome all the difficulties in their lives and perform hari-sevā on their own, then how can we, or any generation to come, expect such a thing? Hari-sevā is not a joking matter.

The four prides of man namely high birth, great opulence, profound learning and physical beauty are like women who will surely confine us in their traps lest they are engaged in serving Śrī Gopī-jana-vallabha, the beloved of all the gopīs.

Instead of seeing ourselves as inseparably related with Bhagavān, we see the entire world and every pleasant thing within it as objects meant for our own enjoyment. And this mood of enjoyment causes us so many troubles. Rather than awakening the desire to become the servant of Bhagavān, this mood awakens in us the desire to become the lord of this world or to subject it to our perpetual control. Everyone here wants to become worshipful, or a master of others, but this craving alone is avaiṣṇavatā, the quality of being non-Vaiṣṇava. There is a bond connecting the servant to the one who is served, and that bond is itself bhakti, the very service being rendered. If one harbours the false pride of being another’s master, how can he engage in service himself? Service can only be performed by a servant.

A materialist non-devotee considers, “It is I who will be the active agent as I engage in hearing, chanting, remembering and beholding the Lord.” But only when we give up the notion that we are the doer, only when we dedicate all of our endeavours to serving the Lord, shall every part of our lives become untroubled. As servants of Bhagavān, we shall constantly remain in the association of devotees and engage in serving Him twenty-four hours a day. We shall depend on the lotus feet of Bhagavān in every respect, for the conciliation of all calamities or any form of trouble is found in perfect reliance upon the arrangement of Bhagavān.

A soul can only proceed from this mundane world to the Vaikuṇṭha planets after he commences his service to Bhagavān. But if he hankers to be served by others, he will remain attached to this world and suffer the threefold miseries of mundane existence.

We are not Kṛṣṇa. We are not the master but the servants. Śrī Kṛṣṇa is eternally our only worshipful master. We are His eternally purchased slaves. The moment we forget this fact and begin a campaign against serving Him, we encounter samsāra, the endless, mundane cycle of repeated birth and death. Thereafter, gripped by the threefold miseries, our suffering is perpetual. This miserable cycle of repeated birth and death is the door to hell. In samsāra, there is nothing but self-centredness and sense-enjoyment. Since simply forgetting Śrī Kṛṣṇa leads one into samsāra, it is said:

If one observes his social duties according to his station in life, but does not worship Kṛṣṇa, then just by carrying out his own duties he descends into hell.

Question 4: How should we perceive this world?

Answer: We should perceive this world and all the objects within it as instruments meant for serving Śrī Kṛṣṇa. Everything in this world is an asset meant for serving Him. When the day comes, by the mercy of śrī guru and Śrī Kṛṣṇa, when we are allayed of our infatuation with secondary reality**, that which appears to be separate from Kṛṣṇa, and we are able to see that this world is made entirely of Śrī Kṛṣṇa, that very day we will visualize this same world as Goloka. We should see all womenfolk as Śrī Kṛṣṇa’s beloved consorts (kānta), and meant only for Him to enjoy. We should never imagine that they are in any way meant for our own enjoyment, for they are kṛṣṇa-bhogya (meant for Kṛṣṇa’s pleasure), and never an object meant for a jīva’s enjoyment. We should see our parents as Śrī Kṛṣṇa’s parents, and we should not consider our son to be our own servant, but rather one of Bāla Gopāla’s childhood servants. In this way, we will not see this world as it outwardly appears, for we will be having darśana of Goloka.

* The literal meaning of guru is ‘heavy with importance’, while laghu literally means ‘light’ or ‘insignificant’

** The phrase “infatuation with secondary reality” is derived from the Sanskrit term dvitīya-abhiniveśa.