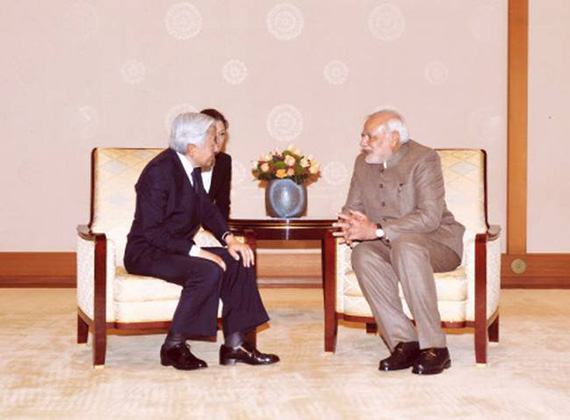 Prime Minister Narendra Modi on Tuesday took a dig at his "secular friends" over his gifting a copy of the holy Hindu text 'Bhagvad Gita' to Japanese Emperor Akihito, saying they could kick up a storm and trigger TV debates back home.

Modi had an audience with Emperor Akihito at the Imperial Palace on the fourth day of his five-day visit to Japan to strengthen bilateral ties.
Addressing the members of the Indian community at a reception here, Modi spoke of him carrying a copy of the Gita during the Japan visit for gifting it to the emperor.

"For gifting I brought a Gita. I do not know what will happen in India after this. There may be a TV debate on this.
Our secular friends will create 'toofan'(storm) that what does Modi think of himself? He has taken a Gita with him that means he has made this one also communal," the Prime Minister said.
As his remarks were greeted with a round of applause, Modi hastened to add, "Anyway, they should also have their livelihood and if I am not there then how will they earn their livelihood?"
Modi said he wondered why nowadays small things create controversies.

"I don't know why, but people create controversies even with such trivial things nowadays, but I have my own commitment and my own conviction that if I meet some great person of the world, I will give it (Gita) and that is why I brought it," he said.
At this point he referred to his audience with the emperor and presenting a copy of the Gita.
"Today I went to the maharaja of Japan, I have given one to him," he said, adding," Because I don't think that I have anything more to give and the world also does not have anything more to get than this.". The remark triggered another round of applause from the assembled gathering.