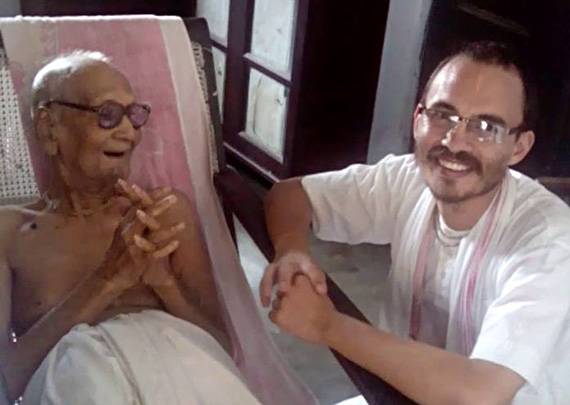 Last Saturday morning I returned from Jagannathpur and was about to change from train to bus in Cuttack when I remembered that one disciple of Srila Prabhupada is still living there. After the departure of Srila Bhakti Kumud Santa Goswami Maharaj and Sri Dol Govinda Sastri he may be the last living Prabhupada disciple.

As I didn’t have his address I first visited the Saccidananda Math. The main administrator, Prahlad Prabhu, was very helpful and gave me his address. He also told me wonderful pastimes of Srila Prabhupada and the local Deities, Radha Vinode Raman Jiu. Prabhupada installed them in 1927 in a rented house and the Math was established in 1933. I may write about them in a separate post. After Prahlad Prabhu filled my heart with the nectar of Their pastimes and my belly with Their delicious prasadam, I took a rickshaw to meet Sri Yogesh Candra Prabhu.

He very affectionately greeted me and then reclined in his easy chair, the same type used by Srila Prabhupada, Paramgurudev and Gurudev. Being a grihastha and recognizing me to be what he called a tyagi (renunciate) he expressed unease when I offered him pranams and sat down on the floor next to him. The chair he offered me was higher than his and too far away for me to hear him; he spoke very softly. In his humility he considered me to be his senior, although he is officially my Guru-varga and thrice my age. He even told his family members to give me pranami (donation), but I asked him to just give me blessings for getting the wealth of bhakti. He smiled and blessed me by putting his hands and the shining Harinam-mala he got from Srila Prabhupada on my head.

As I knew his forefathers were Bengalis I spoke Bengali with him but after a while he said that actually his mother tongue is Oriya and he only learned Bengali in the Math. As you can see on one picture, he folded his hands in front of his head while he remembered the mercy of Srila Prabhupada. Surprisingly, he told me that Srila Prabhupada instructed him to go to London and preach. He was preparing to do so but was held back by his obligation to get his five daughters married, which is a huge thing in India. From that I understood he could probably speak English well but we had already settled for Bengali. I heard from several other devotees who visited him that he hardly speaks at all but we had a lively conversation for over thirty minutes. 🙂

He spoke more about other devotees than about himself. He told me that he was a youth friend of his Godbrother Prof. Nishikanta Sannyal. His diksha name was Bhakti-sudhakara Prabhu. He was the author of the wonderful book and thesis ‘Sri Krishna Chaitanya’ (edited by Srila Prabhupada & Srila BR Sridhar Maharaj). Every morning, they would cycle to college together. Later, as a Professor, Bhakti Sudhakara Prabhu always surrendered his full monthly payment, eight hundred Rupees – a large sum these days – to Srila Prabhupada, who gave him back two hundred Rupees to maintain his family. He gave a high example of the grihastha-dharma principle of giving at least half of one’s income to Guru. But more importantly he surrendered his heart to his Guru. Srila Prabhupada said about him: “He is the guru of sannyasis. He is like a clear, white, spotless flower and I am indebted to him. He's such a good soul. He has sacrificed everything for me.”

Even at 103 years of age, Yogesh Candra Prabhu is still able to regularly serve Radha Vinode Raman Jiu from his three pensions of various services such as government and military.

When lunch time was approaching I bade farewell. I remember his friendly smile and his humility. 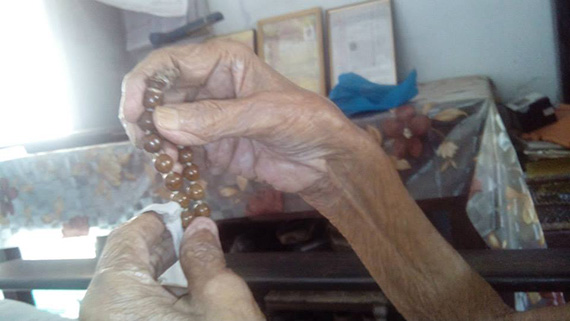