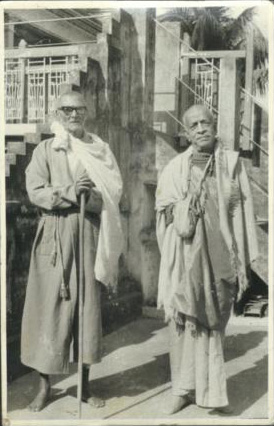 The Vedic culture is considered to be the most ancient and mysterious in the scholarly circle. The great spiritual dictator Sri Krsna Dvaipayana Vyasadeva is known to be the deliverer of the Vedic message in its present form as such the great Vyasa is held in uncommon reverence in all authentic various schools of Vedic interpreters. The last and the greatest gift of the Supreme Personality to the theistic scholars, is the great Bhagavata Purana.

In this holy book the essence of theism, contained in the Vedas has been revealed in such a living and magnificent manner that it dazzles even the intellect of many Vedic thinkers. The bona-fide followers of the dictator however feel simply charmed to see the beauty of spiritual wisdom unveiled in this great treatise. The Absolute Truth – the Beautiful has been discovered here in His lovely autocratic character, and an automatic affectionate service of the same Supreme Being, has been declared to be the summum-bonum of living beings.

Maximum happiness is of course the goal of life. But people are seen to strive after different objects for the same. Their objects of interest while scientifically arranged may be considered under four heads namely, dharma – the consideration of duty, artha – accumulation of worldly energy, kama – actual consumption of the necessities of material life and moksa – perfect liberation from the forces of nature. Great thinkers of Vedic philosophy however easily agree to dismiss the consideration of trivarga, or the first three forms of objects but there is much controversy over the conception of the fourth goal, ie. liberation.

A section of erudite scholars forcibly assert that complete withdrawal from the material world means a certain (sure) dissolution of individual existence. On the other hand powerful theistic thinkers with transcendental understanding backed up by the faith in revelation upholds strongly that individual existence can be retained in absolutely spiritual relativity – perfectly independent of material existence. Vedic interpreters also class themselves in these two groups:

2) Salvation of person from material relativity.

Both the above schools however admit the authenticity of the sayings and decisions of the great Vyasadeva though interpreting him in their own respective lines. But Sri Bhagavata Purana – the last and the greatest work of the greatest apostle, bewilders the impersonal school to a great extent and clearly condemns mere independence from matter eulogizing a life of positive attainment of spiritual confidential partnership in the Absolute Personal Being – the Supreme Beautiful. In other words, a really liberated soul must have a definite eternal function it is said, as if in the Absolute commonwealth and in discharging the duty wherein the unfettered soul enjoys maximum happiness. The Absolute Autocrat is also the Absolute Good. So autocracy here is always meaning to compensate the limitations of the little partners in their voluntary co-operation and thus promoting dynamic, harmonious, common pastimes.

While perfectly unveiled Godhead shines as Sri Krishna to give us all sorts of engagements in Him. He is the emporium of all sorts of rasas (transcendental mellows) or ecstatic energy. Principle rasas are five in number, such as santa – a mode of mere allegiance, dasya – that of actual service, sakhya – that of friendly co-operation, vatsalya – that of filial affection and madhurya – the mode of consort-partnership. All the modes of rasas, we are told, have been harmonized to form the Spiritual Person of Sri Krishna, the Godhead.

The material world being merely a shadow in character, the very essence of life is to be traced in the causal spiritual realm in its pure positive glory. So according to the Bhagavata school our life has got its fulfillment in the most optimistic form in the company of Sri Krsna. Such attainment of final adjustment will place our life in perfect harmony and consequently in all round and unique happiness. While not imaginary but real of all reals, such life is certainly the highest attainment.