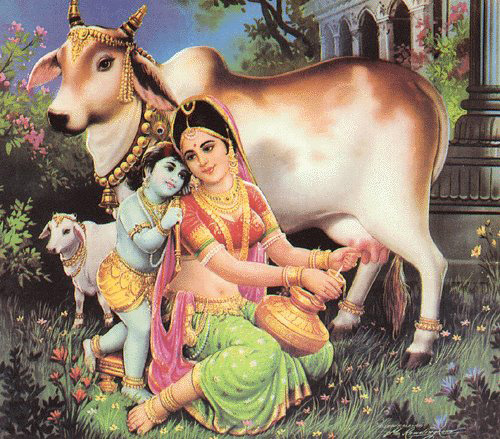 From Govinda Maṅgala by Duhkhi Shyamdas

Duhkhi Shyamdas, also known as Duhkhishyam, lived in the late 1500s. He was a disciple of Srila Shyamananda Pandit and an accomplished poet. He was born in the village Hariharpur in the Kedarkund district, about sixteen miles east of Midnapore. His parents were Srimukha De and Bhavani.

In his Govinda Maṅgala he has presented, in various metrical styles, Krishna’s pastimes of the tenth canto of Śrīmad Bhāgavatam, including points from various other sources, such as the Brahma-vaivarta Purāṇa and Srila Sridhar Swami’s Bhāvārtha-dīpikā commentary on Śrīmad Bhāgavatam. It is said that Duhkhi Shyamdas spent his time wandering around in the Midnapore area reciting from his Govinda Maṅgala.

On another day, after considering things in his mind, Krishna reached the house of a gopī.

[Krishna told her:] “O beautiful lady, listen to my advice. If you give some cream in my hand then no thief will enter your house. I am telling you the truth.”

Hearing this that woman became very happy and brought the cream from the bowl of milk.

However, the hands of Govinda were not filled up. Krishna said, “Listen gopīs, bring more cream for me.”

The milk maids became restless hearing his words and begged cream from their neighbours.

Nearly a hundred bowls of cream were brought as they tried again and again to fill the hands of Govinda.

When the hands of Yadumani Krishna were still not filled, he started laughing. Indeed he ate everything up simply in one morsel.

Seeing this, the women were astonished. Gopinatha smiled and left for his home.

— Translated from the edition published by SriBiharilal Sarkar. Kolkata. 1808 Sakabda. (1886)