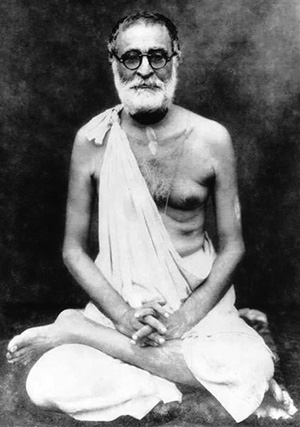 Lalita Prasada was the younger brother of Bimala Prasada, who later became known as Srila Bhaktisiddhanta Saraswati Thakura. Bimala Prasada received Harinama and Narasingha mantra from his father, Kedarnatha Bhaktivinoda, and was advised by him to accept mantra diksa from the revered Gaudiya Vaishnava renunciate, Gaurakisora dasa Babaji. Lalita Prasada, on the other hand, received mantra diksa from Bhaktivinoda Thakura.

Thakura Bhaktivinoda asked Bimala Prasada to preach widely and, in doing so, to establish his conception of varnasrama-dharma for Gaudiya Vaishnavas (daiva varnasrama). Bhaktivinoda encouraged him to use Mahaprabhu’s birth site (yoga-pitha) as his base, a site that Bhaktivinoda had discovered through research and inspiration. Bhaktivinoda’s vision as to the place of Mahaprabhu’s appearance was accepted by his siksa guru, Jagannatha dasa Babaji, as well as by Gaurakisora dasa Babaji, both of whom were highly venerated Vaishnava renunciates of the time. However, his diksa guru Bipin Bihari Goswami did not accept it.

Bhaktisiddhanta Saraswati followed the instructions of Bhaktivinoda Thakura with no objection. Moreover, with the blessing of Bhaktivinoda and Gaurakisora dasa Babaji, he initiated disciples in the manifest presence of his gurus, accepting his first disciple in 1906.

During this period, Lalita Prasada served in his brother’s Gaudiya Matha institution for several years, both before and after the departure of Bhaktivinoda and Gaurakisora. Sometime after their departure, Lalita Prasada took exception to some of the policies of the mission, the character of some of the leading disciples of Bhaktisiddhanta, and also with the sannyasa of Bhaktisiddhanta. Thus he left the mission.

Thus while Lalita Prasada objected to the sannyasa of Bhaktisiddhanta, which he had accepted from a picture of Gaurakisora dasa after the departure of his gurus, it appears from the testimony of Pradipa Tirtha Maharaja that his own sannyasa had been blessed by Gaurakisora even before it took place. In any case, much innovative preaching was done on the part of Bhaktisiddhanta—the kind of preaching that Bhaktivinoda wanted him to do. Indeed, if there is to be a daiva varnasrama that gives support to Gaudiya Vaishnava initiates in the budding stages of their practice, how could it be complete without the sannyasa order?

Still, this and other innovations of Bhaktisiddhanta, such as his bhagavata or siksa-guru parampara conception, did cause a stir in the Gaudiya Vaishnava community. More problems were created due to the fact that Bhaktisiddhanta was critical of the moral standards of that community in general, as well as various Gaudiya practices prominent at the time. Thus a rift developed between Gaudiya Matha and the so-called orthodox Gaudiya sects, and the gap created between Bhaktisiddhanta and these other sects only widened after his departure. Eventually, accusations were made that Bhaktisiddhanta had never been properly initiated, a principal protagonist being one of his own disciples who many had considered the most qualified to succeed him. Opponents of Bhaktisiddhanta, who were still smarting from criticisms he had made of them, naturally made much of this even though such accusations had not been made during the time when Gaurakisora and Bhaktivinoda were around to put such rumors to rest.

Bhaktisiddhanta’s followers, who had already broken into factions by this time, carried on with their independent preaching missions and some of these preachers realized considerable success. This, in turn, brought renewed credibility to the line of Bhaktisiddhanta. Although Lalita Prasada remained critical of some of the policies of his elder brother, in the end he did feel some inspiration to donate the place of Bhaktivinoda’s bhajana in Nadiya, which was under his care, to A.C. Bhaktivedanta Swami Prabhupada, the most prominent preaching disciple of Bhaktisiddhanta. The donation was never realized, but the discussion surrounding it did signal a note of acceptance of the missionary activities of Srila Bhaktisiddhanta Prabhupada on the part of Lalita Prasada in the final days of his life. Furthermore, Srila Bhaktivedanta Swami Prabhupada on occasion allowed his disciples to hear from Lalita Prasada Thakura and personally showed him at least formal respect.

Suffice it to say that old histories like these are difficult to sort out in terms of fact and fiction and even more difficult to objectively prove. Thus different versions of these events are accepted by various followers and promoted by them along sectarian lines. In the end, people are inclined to accept the version of those who most inspire them and thus believe what they want to believe. What is true in every sense will only be discovered through continued spiritual practice and the grace of saints. Looking for the demon in others will never result in finding God in ourselves. We must look within prayerfully and then we will know how to proceed.