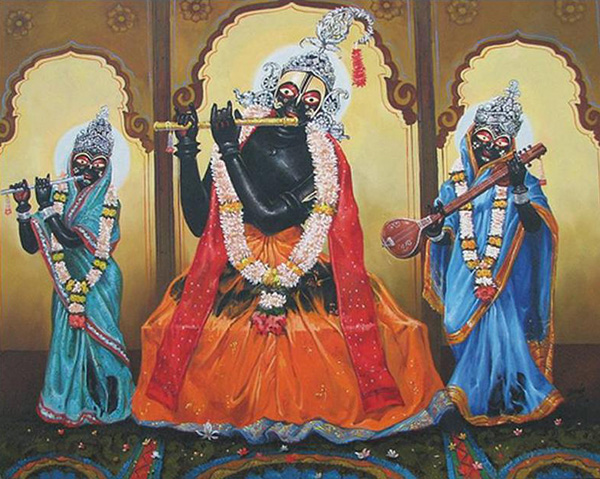 Tota Gopinatha has such a charismatic bewitching quality that draws one to His darshana over and over again. Srila Vrindavana Thakura extols His power: “Even an extreme atheist will be changed upon seeing the Deity of Gopinatha.” At 7am during darshana time, upon request, the pujari can show a small golden streak on Gopinatha’s right knee where Mahaprabhu entered the Lord.

Gopinatha temple is situated in Sri Ksetra Jagannatha Puri Dhama in an area named Yamesvara Tota. When Lord Sri Caitanya Mahaprabhu took sannyasa, He stayed at Jagannatha Puri Dhama for 18 years. Sri Gadadhara Pandita also came with Mahaprabhu. Most of Mahaprabhu’s other associates in Navadvipa remained in Bengal; they came to Puri only once in a year, for the four months of the rainy season, to attend the Lord Jagannatha Rathayatra and to see Lord Sri Caitanya Mahaprabhu. But Gadadhara Pandita couldn’t bear to be separated from the Lord, and the Lord couldn’t bear to be separated from Him. So He was permitted to stay with Mahaprabhu in Puri. Gadadhara Pandita resided here at Sri Tota Gopinatha Temple. While residing here in this peaceful garden of trees and creepers, Gadadhara Pandita recited Srimad-Bhagavatam every afternoon. Mahaprabhu attended regularly and heard recount the stories of Dhruva Maharaj and Prahlada Maharaj 100 times.

One day here, Sri Caitanyadeva experienced immense separation from Lord Krishna. Crying out, “Where is My Prananatha,” Gauranga started digging the earth to search of His Lord. Feeling the carved stone mukuta of a murti below the ground, Gaurahari declared, “Gadai, I have found a most precious treasure here. Would you like to accept it?” Noticing the head of a murti emerging from the sand, Gadadhara helped Gauranga uncover a most beautiful Deity of Supreme Lord Sri Krishna.

Mahaprabhu named the Deity, Gopinatha, and because He appeared in this garden called tota in Oriya the devotees called Him, Tota Gopinatha. Sri Caitanya Mahaprabhu gave the responsibility of Sri Tota Gopinatha’s service to His most dear Gadadhara Pandita, and also awarded Him ksetra-sannyasa.

“In the house of Gadadhara there is most attractive Gopinatha. This Deity looks exactly like son of Nanda Himself is sitting there. Sri Caitanya Mahaprabhu Himself had held Him in His lap. Even most atheistic person will be changed to see this Deity. By seeing the posture of the body and face with flute Lord Nityananda sheds tears of bliss limitlessly.”

WHY SRI TOTA GOPINATHA IS SITTING DOWN?

The Deity of Sri Tota Gopinatha was previously in standing form and was being worshiped by Sri Gadadhara Pandita. But after the departure of Lord Sri Caitanya Mahaprabhu, Gadai (Gadadhara) felt devastated. His body got bent over from intense agony of separation from his beloved Gaura. Although he was only 47 years old, Gadadhara became lean and thin like an old man. Incapable of lifting his arms, Gadai could neither dress Tota Gopinatha nor offer Him candana and flower garlands. Gadadhara thought it best to engage another pujari in worshiping the Lord. In a dream that night, Tota Gopinatha appeared and said, “Why do you want to engage another pujari in My seva? I only want you to serve Me.”

Gadadhara replied, “O Prananatha! Due to my condition, I can no longer stand up and serve You properly.”

Lord Gopinatha said, “No, I insist that you alone serve Me. If you are finding difficulty, then from tomorrow I will become shorter.”

Next morning when Gadadhara entered the Deity room to serve Gopinatha, he saw an amazing sight. The most merciful Lord had sat down in order to receive service from his hands.

After the Disappearance of Sri Gadadhara Pandita, another devotee by name Mamu Thakura took care of Sri Tota Gopinatha Deities. Lord Sri Caitanya Mahaprabhu used to call him Mama, which is Bengali for uncle; in Orissa, "uncle" is Mamu. Thus he was known as Mamu Thakura among the people.