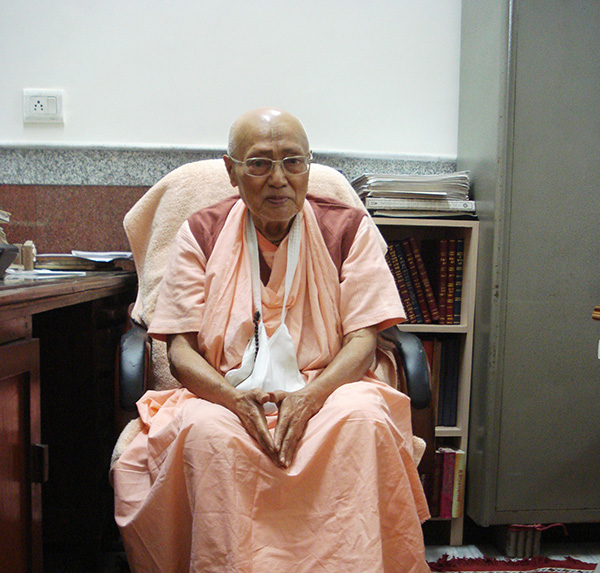 One thing is 'dharma' and another is 'religion'. Both do not convey the same meaning. We do not find any other word in English, so we use word 'religion'. In the Oxford dictionary the meaning of religion is, 'A system of faith, especially personal God entitled to obedience.' Therefore word 'religion' is not a proper translation of the word 'dharma'.

Srila Sacchidananda Bhakti Vinode Thakura says that meaning of 'dharma' is 'nature.' Whatever the nature (behavior) one possess, is his/her dharma. Dharma is of two types; Naimittik (temporary) and Nitya (eternal). for example, Water is liquid by nature. However due to excess cold it takes the form of ice, and if heated it changes to vapors. The chill was the cause for the water to become ice, so ice is the Naimittik dharma (temporary nature) of water and liquidity is nitya dharma (eternal nature) of water. Removal of cause (chill), will bring water to its own eternal nature.

In general, we understand body as the person, but do not tell body as person. We use the following terminology in our daily use, 'my body', 'my mind', 'my intelligence', etc. Nobody says ,'I body', 'I am mind', etc. This explains that the speaker of 'I" is not body but somebody else from body. Even if we see externally, nobody identifies body as the person. Whether it's an atheistic country or theistic, everywhere until the body has the conscious principle, it is considered as a person. On loosing conscious principle, nobody call the dead body as a person. So burning the dead body, giving it to animals or birds, does not cause any punishment. And nowhere the dead body has the right to cast vote.

Until the body has conscious principle, which is also called as atma or soul in the scriptural language, it is identified as a person and not a body. Until the atomic soul, the energy of the eternally existing, eternally blissful, eternally knowledgeable Supreme Lord, remains in the body, it is identified as a person. By the existence of that principle, 'I' remains and by the absence of that principle, 'I' do not remain; that is my nature (means, I am a soul). Soul is eternal , body is not eternal.

Now let's think about real position of the living entities (jivas). Where from the living entities came? What is its dharma? Supreme Lord Sri Krishna tells about it at one place in Sreemad Gita that living entities are parts of His energy. However, another place He says that they are His own parts. On the basis of second statement, some say that jiva is a part of Bhagavan, so he is also bhagavan. However, this is not correct. The jivas are not mentioned as bhagavan here. Both of the Sree Gita's statement should be taken. Lord Krishna says, 'apareyam itas tv anyam prakritim viddhi me param, jiva-bhutam maha-baho yayedam dharyate jagat.' (O mighty armed Arjuna, There is another superior energy of Mine, which comprises the living entities). According to Sree Gita, living entities are not part of Supreme Lord, but a part of His energy. Because the part of the Lord is Lord only. Every part of infinite is infinite. Every part of infinite is infinite, but part of energy of infinite cannot be infinite. For example, the part of Sun will be Sun, however his light rays cannot be called Sun. Even all the light rays collected together cannot be called Sun. Similarly, living entity (jiva) is part of Lord's energy, not of Lord's. Sun is 14,00,000 times the size of earth. If the Sun's light is coming to my room by window, then I cannot say that Sun has come to my room. Sun is 14,00,000 times of the size of whole earth, how can it come? It is the light rays of Sun or the part of Sun's energy. Even all the light rays collected together cannot make Sun. Sun gives light, light does not become Sun.

Supreme Lord has infinite potencies or energies. Sree Gita talk about two of those, 'superior' and 'inferior' potency. Living entities (jivas) are superior energy. Material and subtle bodies are inferior energy. Sri Chaitanya Mahaprabhu made it more clear that Jiva is the part of Lord's marginal potency, atomic conscious. Jiva is from Bhagavan, in Bhagavan, from Bhagavan and therefore for Bhagavan. For example, if one asks the finger of hand, 'who are you?' and finger were to reply 'I am the person.' If we take the photo of a finger, someone may develop misunderstanding about person, because that is not a person. Similarly, if we consider Jiva as Bhagavan, then we will misunderstand Bhagavan. Just like, finger is a small portion of body, jiva is also a small part of Lord's potency, not the complete Lord.

Since Lord is eternal, Lord's potency is eternal. Jiva, the part of Lord's potency, is also eternal. Their relationship is also eternal and their dharma is also eternal. This is called as eternal dharma or 'Sanatan dharma'. The meaning of Sanatan is, whatever existed in past, is existing and will remain to exist. However, the dharma of body is not Sanatan, because the body is destructible. The subtle body made of mind, intelligence and ego is also not eternal. When one's tendency for sensual enjoyment ends, his subtle body also ends. Therefore the dharma of destructible thing cannot be 'Sanatan dharma'. This is called Naimittk dharma. Due to the influence of Maya, soul has got two coverings, first is material covering and second is subtle covering. Both of these bodies have different nature. How many different types of material dharmas we have in our India due to geographical barriers, social barriers, national barriers,etc.? But the soul is superior to mind and body. It is eternal. Therefore it's dharma is also eternal. Sanatan dharma is dharma for not only India, but it is dharma for all the living entities, who are in innumerable universes. The essence is that soul is eternal, body is destructible. Therefore all body related dharmas are destructible and only soul's dharma is eternal. Living entities are part and parcel of Lord's potency. Potency is always under control of potent and serves the potent. Similarly the service of Lord is the highest duty of living entity. This dharma of soul is known as Bhagavat dharma, Sanatan dharma or Vaishnava dharma. This is natural dharma of living entities.