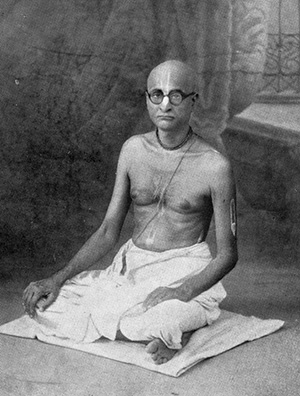 Question 1: Who is known as harijana*?

Answer: Nowadays, the word harijana is being used inappropriately. Truly speaking, harijana refers to the aprākṛta bhaktas (transcendentally situated devotees) of the Supreme Lord, whose svarūpa (true constitutional identity) has been awakened. In whatever lineage one may be born, by whichever identity one may be known externally, only one who has taken shelter of the lotus feet of śrī guru and exclusively serves the Supreme Lord is harijana. Such persons have no duty or desire other than rendering service to the Supreme Lord.

To address those who are non-devotees, whose svarūpa has not awakened, as harijana is both inappropriate and against scriptural injunctions. Although everyone is constitutionally an eternal harijana, as long as someone is still oblivious of their svarūpa, they are not yet identified by that eternal characteristic. Let their svarūpa be awakened and let them become engaged in hari-seva; then we shall have no objection to referring to them as harijana. It is true that every paddy seed contains rice, but paddy seed is not rice. Only after the covering is removed can it be called rice.

It is true that every living entity is haridāsa, or harijana, but one can only be called haridāsa when one is engaged in serving the Supreme Lord, and not before.

Question 2: Some say that everyone is equal. Are they right?

Answer: The real and the unreal, the devotee and the non-devotee, the sinful and the virtuous, the educated and the illiterate, the demigod and the Supreme Lord, the chaste and the unchaste, religion and non-religion, light and darkness, ātma-dharma and anātma-dharma, devotion and non-devotion – how can these be equal to each other?

Everything is considered acceptable by those who remain unaware of internal realities and who have yet to enter into contemplation of the subtlest of subtle subject matters. An ignorant child may claim that his illegible writing must have meaning; for if the writings of knowledgeable men have meaning, then his scribbles must as well.

A foolish man will accuse someone who sees a difference between illegible scribbles and meaningful writing of being sectarian and partial. If one tries to discuss true principles in relation to the Supreme Lord and harikathā with those who are unaware of their internal imports, this mass demographic will reply, “Making people aware of the absolute principles and conclusions revealed in scripture is nothing but sectarianism; and refuting the false conceptions of others is nothing but criticism.”

Their opinion is, “I am ignorant, so it is best if I blend all conceptions together and say that everything is the same. That way everyone will be satisfied and I shall have no disagreement with anyone.”

Truth can never be the same as untruth, and devotion can never be the same as non-devotion. But for those who have no bhakti, who do not realize the necessity of serving the Supreme Lord, and who do not wish for their true welfare but only for material sense-gratification and worldly recognition, the pure and the adulterated are regarded as equal.

Answer: Śrī guru is known to ordinary men in one way and to intimate devotees in another. To the pure devotees, śrī guru is experienced as the one who is dearest to their ātma (parama-ātmīya), as most dear to Śrī Kṛṣṇa, as the sole recipient of their affection, and as their eternal, worshipful master, their life and their everything. Śrī guru is extremely dear to Śrī Kṛṣṇa and non-different from Him; it is not possible to become the servant of Śrī Kṛṣṇa without serving śrī guru. Only those who serve śrī guru are truly devotees of the Lord, or true Vaiṣṇavas.

It is not possible to have darśana of śrī guru through eyes covered by iniquity. To see śrī guru as an ordinary man is to not have true darśana of him. By perpetuating such a perception one only attains hellish realms. Śrī guru is not insignificant; he is not a mortal man. He is īśvara (non-different from the Lord), he is the dear-most associate of Śrī Bhagavān, he is a mahājana (the greatest of men), he is the ācārya (preceptor) of chanting the holy names, and he is kṛṣṇa-preṣṭha (the intimate beloved of Śrī Kṛṣṇa).

Question 4: Why is it that the obstacles in our path are not being removed and why are we unable to attain our cherished wishes?

Answer: We still consider śrī guru, who is non-different from Bhagavān, to be an ordinary mortal being. Consequently, our tendency to perceive faults in him has not yet been dispelled. This is why we are unable to sincerely surrender at his lotus feet. We dishonour the words of the Vedas, the words of the Supreme Lord and the words of Śrīmad Bhagavad-gītā when we consider śrī guru to be an ordinary human being, the Vaiṣṇavas as belonging to an earthly caste decided at birth, and the Lord’s deity form to be a sculpture made of stone, wood or earth. This is the reason for our deplorable condition.

Question 5: What are the innate activities of the jīvas?

Answer: Vrajendra-nandana Śrī Kṛṣṇa is Kāmadeva, the single-most worshipful primeval object for all souls. The jīva’s eternal duty, or natural activity, is to render service to Him. Due to forgetting this, the jīva sometimes becomes a nirviśesa jñānī and thus considers himself to be the Supreme Lord by misconceiving the purport of “ahaṁ brahmāsmi – I am supreme spirit”. Sometimes he becomes a material enjoyer and seeks the material fruits of performing varṇāśrama-dharma**. And sometimes he simply engages in enjoying the company of women and nothing more. This is why it is said, “O jīva, you should relinquish your false pride and your adoration and worship of women, along with your doting submissiveness to them. You should become the kiṅkari*** of Śrī Rūpa Mañjarī and surrender yourself unto serving Śrīmatī Rādhārāṇī. You should always remain engaged in serving Śrī Kṛṣṇa under the guidance of the damsels of Vraja.”

Question 6: Why do material desires arise even while chanting the holy names?

Answer: One attains spiritual welfare by chanting the holy names under the guidance of śrī guru. One should not slacken in one’s chanting of the holy names due to the appearance of material thoughts while chanting. By progressively and regularly engaging in chanting the holy name, all of these useless thoughts shall gradually be dispelled. One need not worry for that. The final result cannot be achieved in the very beginning. As extreme love for śrī kṛṣṇa-nāma manifests, greed for material thought shall diminish. How can one’s material thoughts diminish unless one has developed intense desire for śrī kṛṣṇa-nāma? Only when one serves the holy name with one’s body, mind and words does nāmī – Śrī Kṛṣṇa (the one whose name we chant) – make His all-benevolent, true svarūpa manifest before us.

* ‘Hari’ is the Supreme Lord; ‘jana’ refers to those who are His people. In other words, harijana refers to the true devotees of God. A contemporary use of the word was introduced during India’s Independence Movement in an attempt to elevate the social status of those born in lower castes. For this reason, the original meaning will be elucidated here.

** The occupational duties of the righteous citizen (their dharma) fall into one of four divisions of work (varṇa) and one of four phases of life (āśrama). *** Kim – what; kari – should I do? The loving servants of Rūpa Mañjarī exist always in the state of seeking to engage in some meaningful service to Śrī Śrī Rādhā-Kṛṣṇa.