When it is the time for one to liberate from the material world, then he thinks ‘who am I’? Why I am suffering from threefold miseries of the world? How I shall be actually benefited? To all such doubts, purified souls have answers. They say, you must understand and remember that you are not this body. This is a sort of an upper garment for you. You are part and parcel of Lord’s potency known as soul. This soul always remain as soul, it can never become super-soul. Lord or God or Krishna is the cause of this soul. Many people feel that we are ‘Brahm’ and due to some reason we are suffering from the clutches of ‘Maya’, thus we are known as soul. This is totally incorrect. Reason being that ‘Brahm’ is title for omnipotent or omnipresent. One who is omnipotent or omnipresent can never suffer at the hands of Maya or material energy. Neither this material energy nor Maya is so potent that it is able to engulf the omnipotent. And how is it possible that one who is omnipotent suffers at the hand of his own potency. If he suffers then he cannot be termed as omnipotent. Under such circumstances the meaning of the word omnipotent will be null. Then how could we be able to address such entity as ‘Brahm’.

Let us assume that upon meditating this soul will become omnipotent or Brahm. Still it seems unlikely that this is possible. If the soul was Brahm initially and later on his potency took over him then all sorts of meditation to become ‘Brahm’ would be useless. We meditate to get rid of threefold miseries of this world and since ‘Maya’ can take over us even when we become ‘Brahm’ and turn us to become a soul then all sort of meditation processes are useless.

Some people claim that when soul unifies with the super-soul, soul becomes super-soul. This is also incorrect. As soul is immortal and so is super-soul. If soul looses its own identity by entering in super-soul then the scriptures would be rendered incorrect which claims that soul is immortal or soul never dies. For e.g. in chemistry water constitutes of H2O. Even when water enters ocean, its formula remains intact. It does not break. Even if we try to break water, and make it into two, water will not remain as water, it will break into oxygen and hydrogen.

If the soul was to become God eventually then the devotees like Hanuman, Brahma, Uddhava, Shabri, Raskhana, Bhakti Vinode Thakura, Narottam Dasa won’t be praying to Lord in order to get a chance to serve him. They pray,’O Lord, please have mercy upon us. Kindly grant us a boon that we shall never forget you and we shall never be devoid of your Love’. Had the soul not having their separate identity then all the prayers by such pure devotees of Lord won’t carry any meaning.

The question’ Who am I’ is a significant question. In the Iron age (Kaliyuga) Lord Chaitanya Mahaprabhu preached and practiced the method of serving Lord and that was ‘Sankirtana’. Lord Chaitanya referred to Sreemad Bhagwatam, Sree Bhagwad Geeta and Sri Narada Pancharatra and explains us that, We, the souls are the servants of Lord Krishna eternally. In the seventh chapter of Bhagwad Geeta Lord Krishna explains that soul is part of my potency. This means soul is servitor of Super-soul. Soul was servitor of Lord, soul is servitor of Lord and soul will remain servitor of Lord. All scriptures and pure devotees of Lord certify and declare openly this truth. One must understand that by staying in this material world and forgetting the super-soul, this servitor of Lord suffers from threefold misery. When this soul (servitor of Lord) serves the Lord, or practice devotional process for Lord, he remains in transcendental ecstasy and he is not bothered by any threefold miseries. One who attains this exalted state of devotion is instantly liberated from the cycle of birth and death.' 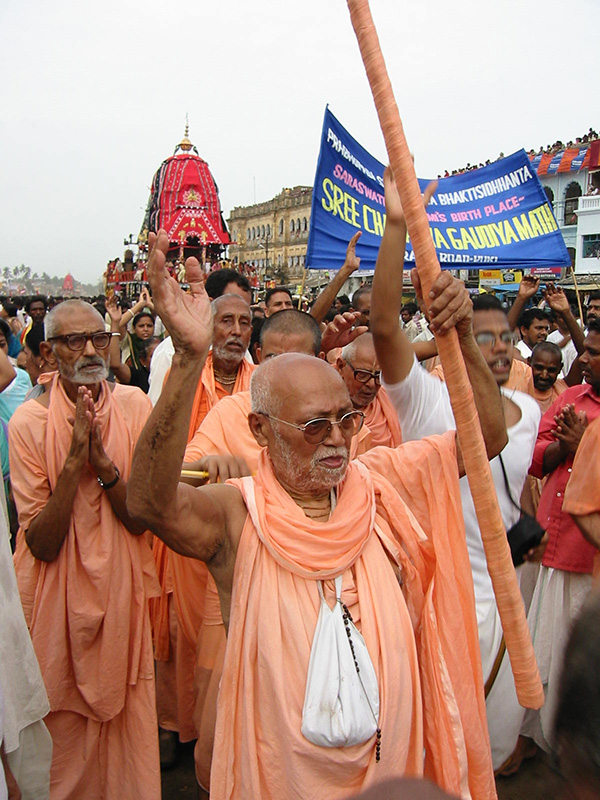