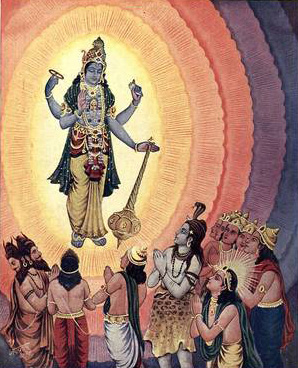 Some of us are very fortunate to be under the shelter of a bona-fide spiritual master who is imparting the true meaning of Vedic knowledge. By the mercy of Sri Guru and Hari, we are bestowed the knowledge of understanding the qualities of the Supreme Lord and His position according to our capabilities.

One of the foremost philosophical points for a devotee to understand is the distinction between the Absolute Truth and His subordinates. Unless one comes in connection with the Vaisnava tradition, it is highly unlikely for anyone to understand the Supreme position of Sri Hari. Hence, at times, common people may find it very hard to understand or accept the fact how Krsna is the Supreme Being. However, a devotee who has the proper understanding of the Vedic scriptures and is under the shelter of Sri Guru will always understand the difference between the worship of Sri Hari and the demigods. Generally in India, the worship of demigods is predominant and depending on different regions, sects and ancestries one is thoroughly committed to different demigods, either due to the desire for material prosperity or simply due to lack of proper knowledge. Vaisnavas on the other hand, have no interest in worshipping or meditating on demigods. The sole purpose of their existence is to develop pure love towards the Supreme Godhead and serve Him eternally. Anything outside this process is considered worthless and insignificant.

At the same time, a Vaisnava never disrespects the demigods. He clearly knows that they are serving the Supreme Lord in their own capacities and are directly empowered by Him. The demigods are assigned to various tasks managing the material world, just like the appointed subordinates of a head of state or a king carrying out different duties. Since they hold some elevated position and powers, they can easily grant benedictions to those who seek material benefits. But a Vaisnava has a much higher understanding of the ontological position of the demigods and never indulges in their worship. Seeking material benedictions is for less intelligent beings who are driven by lust, greed and selfishness.

"The results achieved by persons of little intelligence are temporary. Those that worship the demigods reach them, but My devotees attain Me." (Gita 7.23)

The common idea that is floated around in the present era of spiritualism by so-called gurus and spiritual preceptors is, “Regardless of what or whom you worship, you will attain the Absolute Truth because all paths leads to the same destination” – whether you worship a powerful deva, devi, a fake god-man or just an ordinary rock covered with vermillion and turmeric! This idea of ‘all is one’ is fallacious and one of the many reasons why there are so many misconceptions about Bhagavan. On the battlefield of Kuruksetra, the Supreme Lord Sri Krsna spoke directly to His dearmost friend and student Arjuna about the different aspects of demigod worship and also about those who worship Him directly.

Those who desire material prosperity and seek worldly pleasures worship the demigods and may even attain the respective planetary systems of those gods in this material world for a limited period of time. But a devotee of the Supreme Lord, who is self-realised and who only seeks to serve the lotus-feet of Sri Hari, will attain the supreme abode of Godhead and reside there eternally.

When Krsna Himself assures us of this through His own words, we should never be bewildered by other forms of worship, practices and affiliations to lesser personalities. One may argue that even demigods are highly praised in the Vedic scriptures and they too seem to possess many supernatural qualities. But a person with higher intelligence understands that it is the Supreme Lord who creates and empowers demigods with their various potencies, positions and prestige, just like a government servant may enjoy a certain status and benefits while holding office. However, once his term is finished, he is not entitled to the same benefits. Similarly, demigods may have to take birth again in lower planets depending on their actions, or at times they may even advance to the spiritual abode of the Supreme Lord after rendering devotional service to Him from their positions.

"Narayana is the Supreme Being and from Him Brahma was born, from whom Siva was born. From Him the demigods attained all knowledge." (Varaha Purana)

"In the Vedas, the Ramayana, the Mahabharata and Puranas, from the very beginning to the end, as well as within the middle, only Lord Hari is glorified." (Hari-vamsa)

There is a multitude of sastric references establishing Sri Hari as the supreme authority over all the demigods. Sastra also clearly mentions the different results one procures when worshipping the demigods as opposed to the worship of the Absolute Truth. In the Skanda Purana, Brahma tells his son Narada:

"One who neglects the worship of Vasudeva and worships other gods is like one who gives up his own mother to show respect to a lowborn woman who eats dogs."

"All the demigods become hateful towards one who ignores Visnu. Such a fallen person is pushed into the darkest regions by them."

Therefore, one who is initiated with visnu-mantra never worships demigods in order to gain material benefits, to solve mundane difficulties or overcome astrological dosas etc. This is also explained in the Reva-khanda of Skanda Purana:

"If one is initiated into the mantra of Visnu, one should avoid sankalpa, dana, worship of the forefathers and demigods, nor wear kusa."

"A householder Vaisnava should not perform any fruitive activities prescribed on a daily or periodic basis, those arising from personal desire, charities or vows that are in connection with either the worship of the demigods or the worship of the ancestors by sraddha and tarpana."

In relation to this verse, Srila Gopala Bhatta Gosvami, in his Sat-Kriya-Sara Dipika, says:

"What to speak of brahmacaris and others, even grhasthas who are initiated by a bona-fide guru with visnu-mantra – being under the complete shelter of the Lord – must never perform any rites apart from the worship of Lord Visnu."

"If a devotee of Visnu worships any other demigod even in his mind, he falls down because of this offence."

"What to speak of anything else, even if a devotee of Lord Visnu does such activities out of illusion, bewilderment or carelessness, he falls down because of committing sevaparadha and namaparadha (offences to the service and the Holy Name of Lord Visnu). What happens? One who is bound with the ropes of such material activities, sometimes goes to the heavenly planets and sometimes goes down to the lower planets. That is his position."

In other words, those who neglect the worship of Krsna in order to worship devas, devis, nagas, bhutas etc. do so under the influence of the Lord’s illusory energy and make offences at the Lord’s lotus-feet. Sri Madhvacarya states, tad bhaktanam upeksakah kuryur visnav api dvesam –“Those who neglects Hari and His devotees are to be considered offenders at the lotus-feet of the Lord.” Of all offences, vaisnava-aparadha is the most dangerous and distances one from service to the Supreme.

In reality, by serving and worshipping the spiritual master, all problems can be overcome because Sri Guru is sarva-devamaya – the sum-total of all the demigods. Sri Guru is regarded as higher than all the demigods because of his complete surrender to the lotus-feet of the Lord. He is never perturbed by the material elements and he is solely dependent upon the mercy of the Supreme and never forgets Him.

Despite their elevated material status, demigods are misra-bhaktas (mixed devotees) who engage in sense-gratification and sometimes forget their temporary positions due to the illusory potency of Maya. Thus, a devotee is always better situated than the demigods in terms of pleasing the Lord and attaining His supreme abode.

However, as aspiring devotees we should never neglect to show respect to Krsna’s appointed representatives, the demigods (pujya devas tatah sada). A true Vaisnava shows respect to all jivas, whether it be a demigod, a human, an animal or even an insect. Such a humble attitude will help us to become better servants of Sri Hari, Sri Guru and the Vaisnavas.