Why the Large Hadron Collider and other technologies will never discover the subtle material energy that exists all around us.

Many seekers of knowledge, especially in the scientific community, believe there is no God. The fact is Krishna or God permits them to think this way because the living entities have free will and can desire to exist separately from Krishna if they choose.

Long ago we all chose to leave Krishna and foolishly came to this material universe and in doing so we have rejected not only our original home with Krishna in Vaikuntha the Spiritual World, but have also rejected the fact that everything in His material creation is also His design and created by Him. By doing this, we have concocted our own reasons of how the universe exists to suite our desires for fame, profit adoration and distinction.

We think this way because we have abandoned Krishna and have replaced Him with our own explanation of the universe, this is due to our foolish choice to try and enjoy independently from Him.

Many cultures and religions know of this subtle world with many descriptions past down by ancient civilizations from previous ages that refer to them as ghostly worlds and other subtle existences. This simple means they are referring to a part of the material universe that is devoid of the gross matter and biological features of the material universe.

The modern atheistic scientists have not discovered this subtle world and can never discover it with technology like the Large Hadron Collider.

By denying Krishna as the creator, they come up with many theories of what the material universe is however, it must be made clear they are restricting themselves to only one portion of the material energy as explained above, which is the gross material energy.

Therefore they will never have the means to discover subtle matter that exists beyond the means of all scientific technology no matter how advanced it is or will become. They cannot perceive subtle matter what to speak of the Spiritual energy, which is the true origins of all life. The material scientists, with their advanced technology, can never detect the subtle aspect of the material universe. 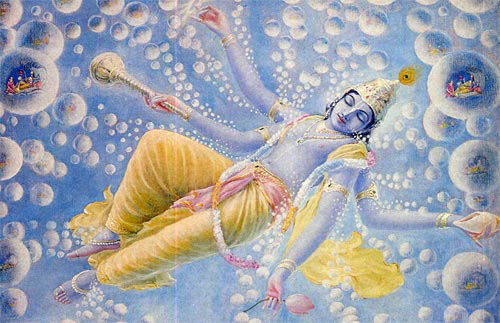 They do not understand and will never understand with their technology the Spiritual world known as Vishnu’s domicile of Vaikuntha and Krishna’s abode of Goloka Vrndavana that is beyond the subtle and gross material coverings of the this temporary universe.

Therefore the material scientists cannot use their technology like space probes, telescopes, electron microscopes and the Large Hadron Collider, to find subtle matter; it is unrecognizable and impossible to find it when using such gross material items. It is like trying to look for darkness in the light, it is simply impossible to discover subtle material energy using gross material energy.

However, the illusion of modern science, due to denying the existence of Krishna, is they claim they will discover the mysterious of the universe. In this way they have misled so many people with their speculative experimentations that have only refined one portion of the material universe, the gross feature or characteristic of material energy as we have seen over the last 150 years with advances in technological development. They have not even acknowledged that a subtle aspect of the material universe even exists.

It states in the Vedas that the only way to enter and see that subtle material energy where there are many heavenly, hellish and ghostly worlds, is by performing pious or impious activities while in a human body, only then can one perceive these subtle worlds. No technology, no matter how advanced, can perceive these subtle realities or dimension.

The material atheistic scientists do not understand that there is a universal system of punishment and reward (karma) going on within the gross material universe. The biological human species is what governs the karmic destination of living entities to take a future birth in either the Earthly, heavenly, hellish or ghostly realms. Only by ones pious and impious actions does one carve their way to the body of their next birth via the subtle dimension. There is no other way to visit the subtle material realities of the material universe; it cannot be reached by mechanical means.