History shows us that numerous religions and cults existed throughout the ancient world. Some, such as those of the Egyptians, Greeks, Romans, Mayans, Olmecs, Phoenicians, Babylonians and Assyrians were practiced for thousands of years and affected vast numbers of people. However they all have one thing in common – they were prevalent for a period of time but ultimately faded away and only exist today in our history books. Despite the predictions of their priests, the fervor of their prayers and the conviction of their followers, they did not carry on into eternity.

At present, the vast majority of theists in the world count themselves as followers of the three Abrahamic religions, Christianity, Islam and Judaism. In relation to some of the religious systems that preceded them, these Abrahamic faiths are still quite young. The oldest of the three, Judaism, was formulated sometime between 400-200 BCE. However, this is still very recent in terms of human history on this planet. Arguments to set the roots of these three religions with Abraham (approx. 1800 BCE) and other Old Testament prophets have been disproven by modern scholars due to a lack of any tangible evidence. Despite their claims of being the eternal word of God, these Abrahamic religions, just like their predecessors, can be traced back to a human source. Everything that is born in this temporary world has a beginning and an end. Therefore, at some point in the future, they will suffer the same fate as all the man- made religions that came before them.

However, long before the Greeks built their temples to Apollo, before the cult of Osiris came into existence, before the Assyrians began their worship of Ashur, the Vedic culture of India was thriving with its timeless system of self-realisation. Archaeological evidence has proven the worship of Visnu/Krsna predates all known religions of the world. While the man-made belief systems of this world will come and go as they always have, Vedic knowledge comes from an eternal source and thus, will continue to exist in the future.

The Vedas are known as apauruseya, or untainted by the faulty senses of mortal man. Unlike other religious scriptures, the Vedas are not attributed to any author; they do not point to a higher source of knowledge and their texts have not been altered or revised. Srila Vyasadeva is well known as the compiler of the Vedas in their written form, but he does not claim credit as the author of this vast body of knowledge. This knowledge originates from its eternal source outside of this temporal realm. While the Vaisnavas put emphasis on certain portions of the Vedas that pertain to self-realisation and the worship of Krsna, the whole canon of Vedic knowledge is creditable. The core of Vedic literature describes in minute detail the nature of the soul and our eternal relationship with God. Yet we find that the theology found in other religions mainly deals with salvation and basic morality and fails to evolve beyond that.

Despite all this, some modern practitioners of Vaisnavism (perhaps due to sentimental attachment to previous religious beliefs) find it necessary to augment their devotional disciplines with practices and ideas from other religions. They feel the need to include such things as Buddhist meditational techniques, alternative readings of the Bible and studies on the lives of various holy men of other faiths. Beyond this, many Vaisnavas engage in interfaith discourses in order to find similarities between the eternal Vaisnava system of sanatana-dharma and the temporary man-made religions of this world. They hope that such comparisons will accord them broad acceptance in modern society. Yet ultimately, such mundane comparisons are a compromise of faith and will only dilute the essential teachings of sanatana-dharma. Such dialogue can only be maintained on a very superficial level because when one analyses the teachings of these various faiths, philosophical equality is out of the question. The inevitable result of interfaith discussion will be the practitioner of Vaisnavism trying to equate Krsna with the deities worshipped in these Abrahamic religions. After analysing the nature of these Abrahamic gods, a true Vaisnava would find such comparisons nonsensical at the very least and offensive at best. 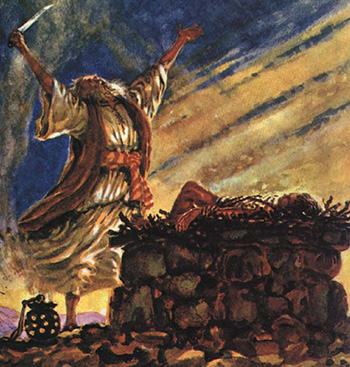 Even one quote about the God of Abraham from the books of these religions should be enough to convince any discerning devotee that the sweet personality of Sri Krsna is incomparable and cannot be associated with such fabricated deities. For the benefit of the reader I have included a few comparative quotes from the Abrahamic scriptures and the Vaisnava texts –

“From there Elisha went up to Bethel. While he was on his way, some small boys came out of the city and jeered at him. “Go up baldhead,” they shouted, “Go up baldhead!” The prophet turned and saw them, and he cursed them in the name of the Lord. Then two she-bears came out of the woods and tore forty-two of the children to pieces.” (2 Kings 2:23-24)

In contrast with this contemptible and merciless scenario where ‘God’ sends bears to tear little children to pieces due to the whimsical curse of his follower, the next two quotes are from Vaisnava sastra regarding the nature of a true devotee of God. From these verses we see that Krsna does not condone capricious acts of violence and expects His devotees to tolerate all insults and to reject identification with the material body:

“One should tolerate all insults and never fail to show proper respect to any person. Avoiding identification with the material body, one should not create enmity with anyone.” (Bhag. 12.6.34)

“The Lord said: O Uddhava, a saintly person is merciful and never injures others. Even if others are aggressive he is tolerant and forgiving toward all living entities. His strength and meaning in life come from the truth itself, he is free from all envy and jealousy, and his mind is equal in material happiness and distress. Thus, he dedicates his time to work for the welfare of all others. (Bhag. 11.11.29)

“Thou shalt not bow down thyself to other gods, nor serve them: for I the Lord thy God am a jealous God, visiting the iniquity of the fathers upon the children unto the third and fourth generation of them that hate me.”

The Talmud, Zohar Vayshlah 177b states:

“That the Jewish nation is the only nation selected by God, while all the remaining ones are contemptible and hateful.”

In contrast to the above quotes where God is described as jealous and racist, Krsna has clearly stated below that He is impartial, equal to all and does not envy any person:

“I envy no one, nor am I partial to anyone. I am equal to all. But whoever renders service unto Me in devotion is a friend, is in Me, and I am also a friend to him.” (Gita 9.21)

“Lo! Those who disbelieve our revelations, we shall expose them to the fire. As often as their skins are consumed we shall exchange them for fresh skins that they may taste the torment again. Lo! Allah is ever mighty and wise.”

In the Vedic literature, there is no such thing as eternal damnation – even for those who reject Krsna. He is merciful to all living beings:

“O Krsna, millions of universes emanate from the pores of Your transcendental body. O father and mother of the universe, just as a mother tolerates the offences of her children, You tolerate the offences of the living entities.” (Krsna-lila-stava 39.154)

These are just a few comparisons to show how dissimilar these conceptions of God are with Krsna. Are these really the words of God? Are these even the words of a civilised nation? Although The Bible states in the Book of Genesis that man was created in the image of God, it would seem from his flawed character that the God of Abraham was actually created in the image of man – a man who is jealous, vindictive, unforgiving, bloodthirsty, racist and genocidal. He is devoid of any real divine qualities. There are no redeeming or endearing characteristics to be found in him whatsoever. He can only be compared to a malevolent and delinquent child who has been given super powers over mankind. Is there any comparison to be made with Krsna here?

A religion that after thousands of years has not understood the fundamental nature of God does not deserve to stand next to Vaisnavism. What is the necessity to seek acceptance from religions professing to be religions of peace that have been spread through violence, intimidation and corruption? The practitioner of Vaisnavism has a veritable banquet of transcendental understanding within his grasp – why should he go searching for spiritual nourishment from a confusing amalgam of manufactured creeds? When one attempts to seek acceptance from these religions it validates their false philosophies and misrepresents the path of sanatana-dharma.

The defining reason why Vaisnavas should maintain a separate identity from other religious beliefs is that Vaisnavas are personalists. The Vaisnava philosophy teaches a message of a personal and individual God who is knowable, beautiful and captivating. All other faiths, whether it is Christianity, Buddhism, Islam, Judaism, Jainism, Sikhism or Hinduism, teach a non-personal conception of God. To them, God is either unknowable, unattainable, one with everything and everyone, or simply non-existent. Impersonalism (nirvisesavada) and voidism (sunyavada) are the complete antithesis of Vaisnava philosophy. For Vaisnavas to try and find theological similarities and claim that ‘all roads lead to Rome’ is to belittle the teachings and activities of the entire parampara.

This is not to incite hatred towards people of other faiths, but to promote real knowledge and real understanding free from misguided ideas. With such a wealth of knowledge and understanding, it is the duty of all Vaisnavas to share this with others. Sharing the knowledge of Krsna and showing the example of what the human form of life is truly meant for is a real example of interfaith relations. The Krsna conception is the pinnacle of theism in its purest form. It does not need to be augmented or altered to fit. Without a doubt, full satisfaction will be found in the flawless teachings of Sri Krsna.

“In this present day, people are very much eager to have one scripture, one God, one religion, and one occupation. Therefore, let there be one scripture only, one common scripture for the whole world – Bhagavad-gita; let there be one God for the whole world – Sri Krsna; one hymn, one mantra, one prayer – the chanting of His name: Hare Krsna, Hare Krsna, Krsna Krsna, Hare Hare/ Hare Rama, Hare Rama, Rama Rama, Hare Hare; and let there be one work only – the service of the Supreme Personality of Godhead.” (Srila Prabhupada – Introduction to Bhagavad-gita)