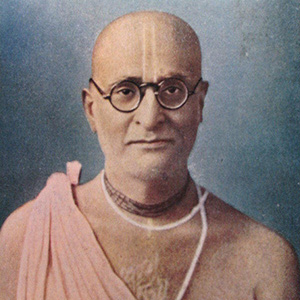 The common decision of men, whether discriminative or otherwise, is not identical with Truth. The common sense of people to follow blindly, like foolish cattle being driven by a herdsman, is always defective, wrought with error borne of the faculty of mind. In it, there may be some appearance of truth, but that is only relative or temporary; it is not real truth. Because human intellect is driven by the modes of passion (rajas) and ignorance (tamas), it cannot penetrate deliberations of the mode of unalloyed goodness (sattva). So, when someone advises us to supplement pure bhakti, which is free from the three modes of material nature, with worldly disciplines like jñāna, yoga or karma, which are borne of the modes of material nature, in order to make it complete, it is to our benefit to not accept their advice. Such a mixture is detrimental to our true well-being. It is like mixing mortar into a deliciously sweet desert.

Karma, jñāna, yoga and so on, which are functions of the body and mind, are the activities of fettered souls. On the other hand, bhakti, which is the function of the soul, is the activity of liberated beings. Consequently bhakti cannot be mixed with activities performed by the body or mind like karma or jñāna, which belong to the world of māyā and which are foreign to the soul. However, when these activities yield to the supremacy of bhakti, then such bhakti, although mixed with karma and jñāna, may help lead us along the path toward pure bhakti. When pure bhakti is finally attained, its mixed form no longer remains. This has been stated in the Pañcarātra: “The particular activities for serving Śrī Hari prescribed by śāstra constitute the authorized form of bhakti, through the performance of which truebhakti may be achieved” (Quoted in Bhaktirasāmṛta-sindhu 1.2.28).

The keen devotees of God must make it clear to the absolute monists that the monists’ idea of naiṣkarmya – cessation of all activity for the sake of attaining freedom from craving the fruits of action – is actually a misnomer. In fact, there is ample desire for reward in such pursuits. Their attempts to attain peace in emancipation are no better than seeking the gratification of their own senses, devoid of any attachment to God.

The principle of their doctrine of illusion, or māyāvāda, is this: “In as much as we have to remain afflicted by the three kinds of misery within the material world, it is necessary to be rid of the evils of the world, which have their origin in the three modes, or guṇas – namely the primordial, constituent elements of matter: sattva, rajas and tamas. If we can do away with the trinity of the knower, the knowable and knowledge itself, we shall no longer have any separate existence and we will finally realize the disintegration of self.” This is similar to the doctrine of Buddhism in which the annihilation of sentience is emancipation. Contrary to these doctrines, the full manifestation of sentience eternally exists in the Real Entity. Followers of these doctrines cannot understand how they entered the conditioned state or what the liberated state would be like. In other words, their conception of emancipation is totally wrong.

If someone argues that there is no need of devotion, a thing that compels us to take shelter at the feet of God, and that we can cross the ocean of material nature by the power of impersonal knowledge alone, he is referred to the words of Śrī Brahmā in his eulogy of Śrī Kṛṣṇa:

“O lotus-eyed Lord, those who conceitedly cherish having attained emancipation without ever taking shelter of Your lotus feet, have unclean minds, empty of the treasure of love for You. In spite of acquiring a high position near to emancipation, they fall from it on account of having disdainfully slighted Your Feet. O Lord Mādhava, Your devotees, bound to You with ties of loving friendship, do not deviate from the right path like these pretenders. Protected by You, they fearlessly walk over the heads of the severest of interruptions and obstacles” (Śrīmad-Bhāgavatam 10.2.32–33).