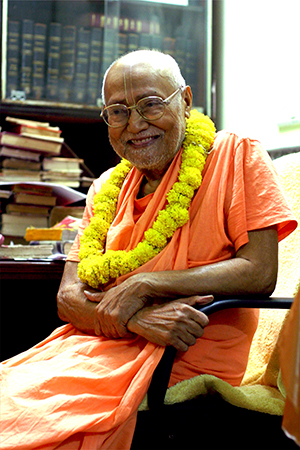 The present-day world appears to be running fast towards destruction. As per Indian scriptural evidence, the conditioned souls are enveloped by Lord’s illusory energy consisting of three primal qualities— Sattva, Rajah, and Tamah. ‘Tamah’ indicates tendency to commit vice or to inflict injury. In fact, tamah tendency has now engulfed the whole world and is spreading over like fire and showing it’s most monstrous destructive ugly appearance.

The sagacious persons are bewildered to find any solution of this terrible tendency of violence.

By Rajah-guna living beings are created, by Sattva-guna they are maintained and by Tama-guna they are destroyed. Living beings are non-eternal. Human beings are the best amongst all kinds of created species, because they have got the discriminating power between good and bad, eternal and non-eternal, vice and virtue. Eating, sleeping, defending and mating are equal in beasts and human beings but human beings are superior because of their discriminating power. Practically it is demonstrated now that the human beings have become the greatest enemy of their own species. They are causing unnatural deaths without considering the innocence of the killed— whether they are children or women, whom the killers have never seen and who have never done any harm to the killers. It is the greatest shame of such human beings to claim the false vanity of being the best amongst created beings.

Lord does not think much about sins of other living beings who have got no such discriminating power. They do actions out of instinct. But God has bestowed discriminating power to human beings. In spite of that if they commit heinous crimes, surely they will be punished. They will never be spared. They are lowering the status of humanity. We may commit heinous crimes by deceiving ignorant human beings, beasts and birds, but we cannot deceive Supreme Lord Who is Omniscient. Lord is residing in the heart of every individual soul.

‘Karmanye va dhikaraste ma phaleshu kadachana’ —Bhagvad Gita. As human being has got relative independence, he can do good and bad deeds by good or bad use of his relative independence. But the fruits of those deeds are controlled by Supreme Lord and not by conditioned souls of the world. Out of ignorance, conditioned souls always have the aptitude to blame others for their sufferings.

When human beings have lost the capacity to understand difference between civilization and non-civilization, good and bad, they have lost everything. There is one pithy saying to know the criterion to understand which is good and bad, beneficial and non-beneficial— ‘When wealth is lost, nothing is lost; when health is lost, something is lost; and when character is lost, everything is lost.’ Now there is competition of who can become more wealthy, mutual rivalry between haves and have-nots. This wrong conception and rivalry between haves and have-nots have engulfed the whole human race and they are becoming more and more ferocious and murderous. Even some of them have got the ghastly mentality of endeavoring to invent horrible bombs to destroy all living beings. Is it the criterion to understand development of civilization? But this most heinous mentality is spreading like fire very fast, which may ultimately lead to complete destruction. The sensible persons should think now very seriously to save the situation from such devastation. The highest importance should be given now for character building of the human society. The root cause of such venom is false ego— wrong conception of self, consequently causing false interests. Those who have lost the basic knowledge of self-realization have become completely blind and they are making others blind.

Indian saints have given knowledge of that path of self-realization by holding discourses on authentic scriptures and by writings. Only theoretical knowledge is not sufficient, there should also be practical spiritual life. ‘Example is better than precept’. This must be started forthwith and introduced in education system. Character building is the backbone of the nation and human civilized society. But most important is that the instructor should have practical moral and spiritual character. ‘Don’t follow me, follow my lecture’ should not be the way of teaching. Only theoretical lectures without practical life will not be actually effective.

In oxford dictionary, ‘Education’ is defined as— systematic instruction, course of this, development of character; ‘Character’ is defined as— mental or moral qualities. The word ‘secular’ is very often used in Education. As per Oxford dictionary, secular means— ‘concerned with the affairs of the world, not spiritual, not sacred’. When secular word is not sacred, what is the reason to feel hesitation in introducing basic moral and spiritual education to children and the youth? If citizens of the country have got no basic moral and spiritual qualities, how can we think about good governance of the country by the citizens without moral and spiritual backbone?