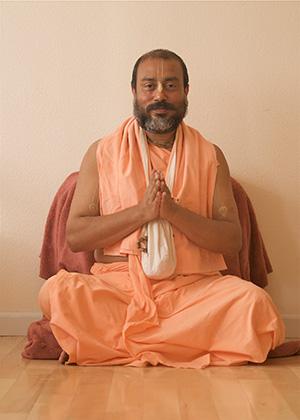 All Glories to the Sri Brahma Madhva Gaudiya Saraswata Sampradaya.

First of all, please accept my due respects and heartfelt love.

Today is Gour Chaturdasi (14th day of the waxing moon). On this day, according to the lunar calendar, I took birth in the village of Kanpur, Howrah district, West Bengal, India.

I feel fortunate to have been connected with the Gaudiya sampradaya by the grace of Sri Guru and the Vaisnavas in this birth. My maternal grandfather, Sripad Madan Mohan Prabhu, a disciple of His Divine Grace Srila Bhakti Siddhanta Saraswati Goswami Thakur Prabhupada, inspired me to be connected with this disciplic succession from my childhood. And, after I finished my mundane education with a bachelors degree, Madan Mohan Prabhu inspired me to dedicate my life to serve Guru and the Vaisnavas to be delivered from the miseries of this world rather than get entangled in mundane business affairs.

These days, it is rare to see such a well-wisher in Indian families, who is inspiring the children to renounce family attachment for the service of Lord. Therefore, today I offer my humble obeisances to my grandfather, Sri Madan Mohan Prabhu, and to all of the devotees who are protecting me from different material dangers and who are inspiring me to follow the path of devotion with purity.

At the present time it is not easy to survive devotionally in this world. Kali Maharaj, the master of Kali-Yuga, is spreading illusionary nets throughout society in an attempt to break the vows of devotees trying to follow a renounced life. Even the Holy Dhams are affected with many illegal hotels, prostitutes, and demonic government policies that do not protect our spiritual heritage. Therefore, we can know that those who are able to maintain the purity of their renunciation in this sporadic spiritual condition have the mercy of disciplic succession always behind them.

In order to continue my spiritual practice with purity and integrity for the rest of my life, I humbly beg the mercy of chanting enough rounds of the Hare Krishna Maha-mantra without offenses and from all the Vaisnavas, as well as, the disciplic succession (our guru-vargas).

Oh, living entities! Please chant ‘Krishna-nam’, other than that all are your fake activities; there is no way to escape from the influence of Yamaraja (Lord of death) in order to protect us from present problems.

In the age of Kali-Yuga, there is no other religious path to deliver us from the miseries except chanting Krishna’s name.

This Holy Name will gradually allow us to get a taste of Divine Love (the beauty and sweetness of Sri Sri Radha Krishna’s eternal abode—Goloka Vrindavan). And not only will the Holy Name give us a taste of Divine Love, but the Name will allow us to receive a spiritual form to serve the Divine Couple, Sri Sri Radha Krishna eternally. This is the topmost goal of human life on Earth.

So, I am humbly requesting you to think about the extraordinary benefits of chanting the Holy Name, the Hare Krishna Maha-mantra, and to perform it with the best of your ability in spite of your busy schedules. If we try to chant without any material motivation, we can receive the mercy of disciplic succession (the guru-vargas of our sampradaya). Even if we have committed so much sin in our past, our guru-vargas’ mercy and the effects of chanting the Holy Name will deliver us from the consequences of all sinful reaction.

Long, long ago, a man named Ratnakar maintained himself and his family by committing so many sins like cheating, stealing and even murdering travelers. Then one day he came to rob the great traveling sage, Sri Narada Muni and Narada showed compassion on this sinful and evil person.

First, Narada awakened Ratnakar to the suffering he would have to endure in the future as a reaction for all his sins. Ratnakar defended himself by saying he was simply maintaining his family with these sinful activities. So Narada sent him home to ask his family if they were willing to share in the reactions of all his horrible sins. His family was shocked to hear how he was maintaining them and they renounced him on the spot.

Ratnakar returned to Narada with great remorse in his heart. Narada instructed him to chant Lord Ram’s Name to be delivered from his sinful reactions, but Ratnakar’s volume of sins was so great that he was unable to concentrate or even pronounce the Holy Name of ‘Ram.’ So, Narada thought of another way to deliver him by instructing him to repeat the word ‘mara.’ which means ‘death.’ By chanting ‘mara,’ over and over, Ratnakar was able to chant the name of Ram.

In this way, Ratnakar was gradually able to pronounce and concentrate on the Holy Name ‘Ram.’ And out of his faith in the words of his Gurudeva, Narada Muni, he acquired sound faith on the Holy Name of Ram.

Another incident with the Holy Name occurred with Lord Chaitanya Mahaprabhu and the Chand-Kazi. Chand Kazi was the local governor of Sri Mayapur Dham ( Navadwip). The Chand Kazi had received several complaints from local people about the loud chanting of Harinam at Srivas Pandit’s house and in Navadwip town. Being a Muslim by birth, Chand Kazi was not happy with the reports of Harinam Samkirtan going on in his jurisdiction. So, the Chand Kazi took advantage of the complaints to confront those who were not following the Islamic path. He sent his soldiers to break the mrdangas and intimidate the devotees to stop their chanting.

When Mahaprabhu heard this news, he organized a protest of tens of thousands of devotees to march that night with torches to Chand Kazi’s residence chanting Harinam Samkirtan. When the crowd arrived they started to shout in the name of Chand Kazi. Fearful and astonished, Chand Kazi invited Mahaprabhu into his house to talk with him.

Mahaprabhu immediately addressed Chand Kazi in Bengali, ‘mämä’ which means maternal uncle. Seeing the unruly crowd and recalling a mysterious dream from the night before, the dream was Lord Nrsimhadeva, the half-man, half-lion incarnation of the Lord came to him and scratched at his chest. Lord Nrsimhadeva told him, “Today you did not cause so much trouble so I will allow you to live, but if you again try to interfere with the Samkirtan movement I will kill you and your entire family. Therefore, the Chand Kazi was in a state of fear but Mahaprabhu pacified him by embracing him out of His causeless mercy.

Mahaprabhu then explained to the Chand Kazi, “In your previous life in the Copper age (Dwapar Yuga) you were Kamsa, the King of Mathura, and due to your demonic activities you have appeared here as a non-vaisnava to perform similar activities. But in this age I am here to deliver people with Love.”

During their meeting, Chand Kazi uttered the Name of Krishna twice (namabas) and his sins were destroyed. His mind transcended from Islamic faith to Vaisnava faith. Therefore, when I visit Chand Kazi’s samadhi these days I can see this place has become a center of unity amongst Islamic people and Vaisnavas and my heart becomes happy to see the unity between the two religions.

Mahaprabhu , the incarnation of Divine Love, ordered Nityananda Prabhu and Haridas Thakura to freely distribute Harinam, the Divine loving wealth of Goloka, the abode of Sri Sri Radha Krishna, in Navadwip town. Jagai and Madhai lived in Navadwip, practically terrorizing the residents there with their demonic behavior. They had committed every sin imaginable and were intoxicated and fighting most of the time. These brothers had no appreciation for Harinam Samkirtan at all.

When Nityananda Prabhu saw Jagai and Madhai he thought that if they could be converted to humble vaisnavas, it would greatly help spread the world Sankirtan movement. Nityananda humbly asked the two ruffians to chant the name of Krishna, but Jagai and Madhai became so furious, that both he and Haridas had to run for their lives,. The next day Nityananda again approached the borthers to please chant and, out of anger, Madhai threw a broken piece of clay pot that struck Nityananda Prabhu on the forehead. Nityananda Prabhu was bleeding from His forehead from being struck but he did not protest.

Other devotees quickly passed on the news to Mahaprabhu who suddenly appeared on the scene, full of anger, to punish Jagai and Madhai for their offense to Nityananda Prabhu.

But Nityananda Prabhu astonished everyone by requesting Mahaprabhu to show His mercy to the riffians. He said, “In this age You appear to deliver people with Your Love, not to rectify them in a harmful manner. Jagai & Madhai are very fallen souls. They need Your mercy to understand the value of chanting the Hare Krishna Maha-mantra in this age. Please deliver them with Your magnanimous Love and mercy and inspire them not to commit any more sins from today by inspiring them to chant Harinam.” After this incident the Jagai & Madhai became humble vaisnavas, as well as, great devotees of Mahaprabhu, who is Sri Sri Radha Krishna in combined form.

Today I am begging blessings and humbly offering my handful flowers to my gurudeva and all other vaisnava’s lotus feet in order to carry on the mission of Mahaprabhu in order to distribute Divine Love and Harinam to all over the world without offenses and mundane motivation.

I hope all of you will pray for my spiritual strength to carry the mission of Mahaprabhu for rest of my life with purity.

Trying to be a tiny spark of Guru-Vaisnava’s Lotus Feet.