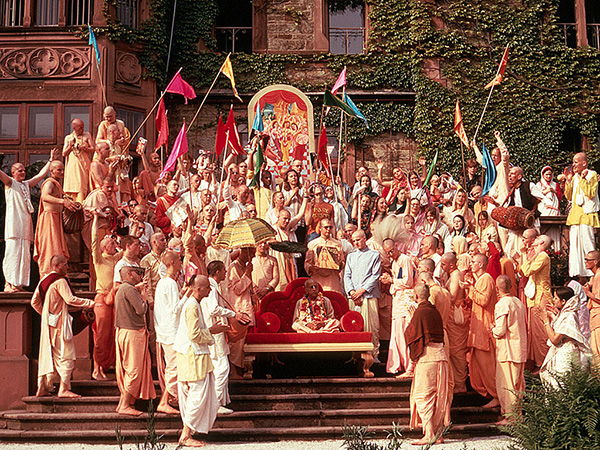 Srila Bhaktivedanta Swami Maharaja surprised the entire world as well as his godbrothers with his outstanding achievements. He single handedly fulfilled the prediction of Sri Chaitanya Mahaprabhu: The Holy Names of Krishna will be sung in every town and village in the world.

• The founder started 108 centers around the world, which were later increased by his disciples.
• Many vegetarian restaurants and farm communities.
Bhaktivedanta Book Trust
• Publications in over sixty-four languages. The first complete edition in English of the Srimad Bhagavatam and the Chaitanya Charitamrita with the purports of Srila A. C. Bhaktivedanta Swami Maharaja
• Several homepages in the Internet for preaching in digital format.
Bhaktivedanta Archives
• Vedabase – a computer database containing 80 translations of Vaisnava classic books on digital format with Bhaktivedanta purports
• A library of recorded lectures and songs on Tape and CD. (magnetic and digital media formats)
• 14,000 letters to his disciples.
Bhaktivedanta Institute
• scientific research, publications and conferences
• promotion on traditional Vaisnava arts worldwide
• training seminars on arts and sciences
• “Origins magazine” an analysis of life & matter issues
Other Publications
• Biography of the founder by Srila Satsvarup das Goswami
• Back to Godhead Magazine, in English and many other languages (started by the founder on 1944)
• Hare Krishna World – an international newspaper in English
• ISKCON Television – Vaisnava television pioneers
• ISKCON Cinema – Sri Yadubara and Srimati Visakha prepared many movies for preaching.

• Pada-yatras world-wide – walking and preaching around the globe.
• Ratha-yatras in major cities all around the world (more than 50).
• Television biography of the Founder of ISKCON to be broadcasted for two years in India.
• Gurukulas – pioneer work of establishing Vedic principles in primary school education.
• Prasadam distribution, food relief, and vegetarian restaurants world-wide.
• FATE – First American Transcendental Exhibition.
• Attempts to create self sufficient farm communities world-wide.
• Penetrating politically very difficult areas, such as Communist and Muslim countries; successfully establishing Krishna Consciousness in these areas.
• The Mahamantra and other devotional songs were included in their music and thus made Krishna’s name very famous.

Source: Our Family the Gaudiya Math