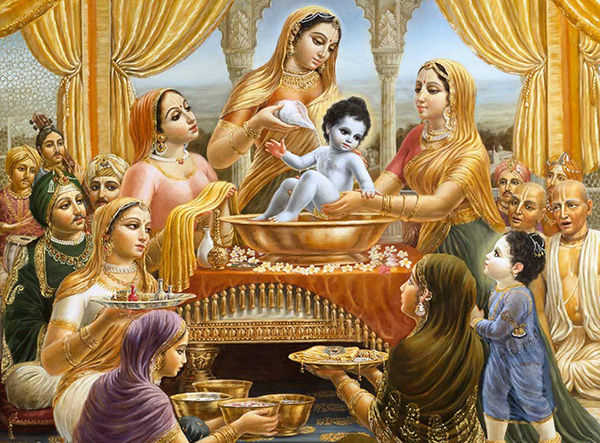 The Monsoon of Lord Krishna’s Opulence

Fifth Shower
Description of the Festival of the Births of the Supreme Personality of Godhead and His Associates.

Lotus-eyed Lord Krishna, the master of all transcendental opulence and glory, entered Maharaja Vasudeva and appeared before Maharaja Nanda. Learned and exalted, Vasudeva and Nanda gave Lord Krishna to their wives, who both held Him as their son.

Because of Lord Krishna’s entrance in their wombs, the two friends Devaki and Yasoda became very beautiful. Appearing as splendid lightning they delighted the pious devotees and pained the envious demons.

When Lord Mukunda (Krishna) appeared in this world, musical instruments sounded of their own accord, trees and flowers blossomed, and the minds and hearts of the brahmanas and devotees also blossomed with happiness.

On the eight night of the dark moon, at midnight, when the star Rohini was near the moon, the queen of Vraja easily gave birth to twins: Lord Hari and the goddess Durga; and at the same moment Devaki gave birth to a single child: Lord Hari. When Lord Hari appeared in this way the pure hearted devotees became filled with joy.

Seeing his son and knowing Him to be the Supreme Personality of Godhead, Vasudeva became filled with happiness and gave away millions of cows in charity within his mind. Because he was afraid of Kamsa, Vasudeva quickly carried his unlimitedly powerful son to the home of his brother, the king of Vraja.

Vasudeva placed his own son in Nanda’s home, took Yasoda’s daughter, and gave her to King Kamsa. By Lord Krishna’s inconceivable potency the two Krishnas born separately from Devaki and Yasoda became one tiny child.

Note: His Divine Grace A.C. Bhaktivedanta Swami Prabhupada mentions this pastime in the following words (Srimad Bhagavatam 10.3.47 Purport): “Srila Visvanath Cakravarti discusses that Krishna appeared simultaneously as the son of Devaki and the son of Yasoda, along with the spiritual energy Yogamaya. As the son of Devaki, He first appeared as Visnu, and because Vasudeva was not in the position of pure affection for Krishna, Vasudeva worshipped his son as Lord Visnu. Yasoda, however, pleased her son Krishna without understanding His Godhood. This is the difference between Krishna as the son of Yasoda and as the son of Devaki. This is explained by Visvanath Cakravarti on the authority of Hari-vase.”

“When Maharaja Vasudeva arrived in Vrajabhumi he entered Yasoda-devis maternity room, saw Yasoda’s daughter, took her, and returned with her to Mathura. The Vasudeva expansion Maharaja Vasudeva carried with him entered the body of Sri Krishna, who had just taken birth as the son of Yasoda. In this way the two forms of Vasudeva and Krishna became one.”

“Because this pastime is very confidential it is not related in Srimad-Bhagavatam. Nevertheless Sukadeva Goswami and other great devotees have indirectly described it in some of their writings.”

From his associates, the king of Vraja learned about he birth of his son, who was in truth the Supreme Personality of Godhead. Overcome with joy, the king dressed in costly garments and ornaments and had the best of brahmanas perform the birth ceremony according to the rules of the Sruti-sastra.

Nanda Maharaja was naturally generous and full of faith in the Supreme Personality of Godhead. Overwhelmed with joy at the festive celebration of his son’s birth, he gave two million nicely decorated cows along with their calves in charity to the brahamanas.

Nanda Maharaja gave to the brahmanas seven hills of grain along with many jewels, golden ornaments, and costly garments. All the cows were carefully decorated for the occasion. Vraja became filled with wonder.

The brahmanas, sutas, magadhas and vandis recited auspicious prayers. Musical instruments were sounded, and there was a great winder of singing and dancing.

Hearing about the auspicious transcendental qualities of Nanda Maharaja’s son, the cowherd people became full of joy. Nicely dressed, wearing jeweled ornaments, and bearing valuable gifts in their hands, they eagerly went to the home of the king of Vraja.

Dressed in wonderful colorful ornaments, beautiful jewel earrings, ankle bells, and great necklaces, and carrying gifts in their hands, the women of the town of Vrajapura came to the kings palace, eager to see Lord Krishna.

Their voices decorated with the shouts of jaya, the people of Vraja sprinkled ghee, yogurt, and turmeric. AS if mad with happiness, Brahma, Siva, Sanatkumara, and all the demigods danced in the kings courtyard.

With a joyful heart the king of Vraja welcomed his friends and relatives and gave them gifts of many priceless jeweled ornaments, costly garments, and fragrant incense and perfume, fulfilling all their desires.

Nanda Maharaja glowed with happiness at the celebration of his son’s birth. He opened wide the doors of his treasury and gave charity without restriction. Drowning in a flood of happiness, the beggars loudly praised the kings charity that fulfilled all their desires.

At first the king of Vraja and his subjects experienced a happiness within measured limits, but when child Krishna, the Supreme Lord, arrived, everyone’s happiness at once passed beyond all limits.

Behind Krishna came Sri Balarama, Sridama, Ujjvala, and many other children. Shining with great luster, these boys made Vraja appear like the peak of a mountain of jewels.

Filled with transcendental glory and opulence, Govinda and the other boys filled with happiness the homes of the fortunate cowherd men headed by Maharaja Nanda in Vrajabhumi.

Even though Lord Krishna, the son of Maharaja Nanda, is the Supreme Personality of Godhead, the ultimate goal of all living entities, He still considers that the supreme goal of His life is Sri Radha, who has fathomless beauty and numberless transcendental qualities, an who appeared in the holy abode of Vraja as the daughter of Kirtida-devi.

At the time of the festival of Sri Radha’s birth, even the prayers of the great demigods left the world unsatisfied. When the women of Vraja saw the auspicious marks on Her lotus feet they all became convinced that this girl was the goddess of fortune.

When poets attempt to describe Sri Radha they became filled with awe and they loudly rebuke the moon, the lotus, and other beautiful things of this world. By constantly meditating on Sri Radha and by repeatedly offering obeisances to Her, these poets attain intense happiness within their hearts.

Every kind of transcendental glory and opulence is manifest from Sri Radha’s sidelong glance. Even Lord Krishna, the Supreme Personality of Godhead is not able to describe them all.

Sri Radha’s friends, who expertly serve Her, and whose beauty, virtue, and transcendental qualities resemble Hers, then appeared in the capitol of the king of Vraja in the homes of the best of the cowherds.