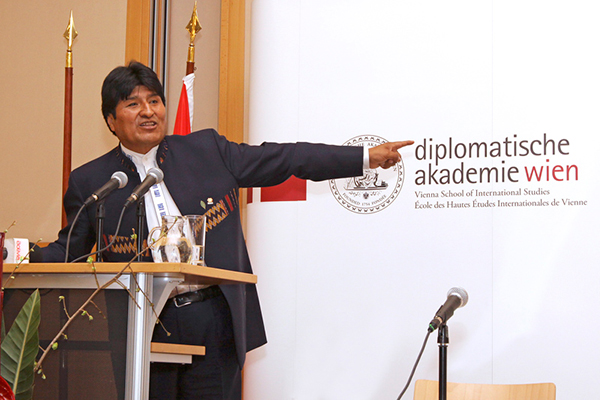 Presentation of Bolivia’s President Evo Morales to the Heads of State of the European Union on June 30, 2013

With simple language –that was broadcast in simultaneous translation – to more than a hundred heads of state and dignitaries from the European Union, President Evo Morales managed to unsettle his audience when he said:

“Here, then, I, Evo Morales, have come to find those who are celebrating the gathering.

Here, then, I, a descendant of those who were living in America forty thousand years ago, have come to find those who found America only five hundred years ago.

Here, then, we all meet together. We know what we are and that’s enough. We will never have anything else.

The European custom brother asks me a written paper (visa) to be able to discover those who discovered me.

The European profiteer asks me to pay a debt contracted by Judas, to whom I never authorized to sell me.

The European pettifogging brother tells me that all debts must be paid with interests in the debt, even selling human beings and whole countries without their consent.

I am gradually discovering the European brothers.

It appears in the Archives of the “Indies”, paper by paper, receipt by receipt, signature by signature, that only between 1503 and 1660 came to San Lucas of Barrameda 185000 kilos of gold and 16 million kilos of silver from America.

Looting? I don’t believe that! Because this would mean that our Christian brothers broke their Seventh Commandment.

Pillaging? Tanatzin doesn’t allow me to think that the Europeans, like Cain, kill and deny the blood of their brother!

Genocide? No, no! That would be to give credit to slanderers like Bartolome de las Casas, who has described the discovery of the “Indies” as its destruction, or extremists such as Arturo Uslar Pietri, who has stated that the outburst of capitalism and the current European civilization was due to the flood of our precious metals!

No! Those 185 thousand kilos of gold and 16 million kilos of silver must be considered as the first of many friendly loans (from America), for the development of Europe.

The opposite would presume the existence of war crimes, which would mean not only our right to demand the immediate repayment of this loan, but also compensation for damages.

I, Evo Morales, prefer to think of the least offensive of these hypotheses.

Our fabulous capital exports were only the beginning of a plan ‘MARSHALL-TEZUMA” to ensure the reconstruction of barbaric Europe, ruined by its deplorable wars against Muslim cults, creators of algebra, polygamy, the daily bath and other superior achievements of civilization.

So, to celebrate the Fifth Centenary of the Loan, we can wonder: have the European brothers made a rational, responsible or at least productive use of the funds so generously advanced by the International Indo-American Fund?

Unfortunately the answer is no!

In terms of the strategy, they squandered those funds in Lepanto battles, in invincible armies, in third Reichs and other forms of mutual extermination, which forced them to end occupation by NATO gringo troops, as in Panama (but without the channel).

Financially, they have been unable, after a moratorium of 500 years, to either pay the principal capital and its interest, or getting independence from the net revenues, raw materials and cheap energy exported and supplied to them from the Third World.

This disgusting picture corroborates Milton Friedman statement according to which a subsidized economy can never really work. This compels us to claim for Europe's own good, the repayment of the principal debt and its interest that we have so generously delayed all these centuries.

In saying this, we also assert that we are not going to charge our European brothers the despicable and bloodthirsty interest rates of 20 and up to 30 percent (that they charge to Third World peoples). We only demand the return of the precious metals advanced, plus a modest fixed 10 percent interest, accumulated only during the last 300 years, with 200 years of grace.

On this basis, and using the European formula of compound interest, we notify our discoverers that they owe, as a first payment of its debt, a mass of 185 thousand kilos of gold and 16 million of silver, both figures raised to the power of 300. That is, a number for the expression of which, we would require more than 300 digits, which exceeds the total weight of planet Earth.

Do you consider that these piles of gold and silver are very heavy?

How much they would weight if they are calculated in blood?

Claiming that Europe – in half of a millennium– has failed to generate sufficient wealth to pay the modest interest would be to admit their absolute financial failure and / or the insane irrational assumptions of capitalism.

Such metaphysical questions, of course, do not concern to the American Indians.

But we demand the signing of a Letter of Intent to discipline the debtors peoples of the Old World, to enforce them to fulfill their commitment by an early privatization or restructuring of Europe, allowing them to give the whole of it to us, as the first historical debt payment…