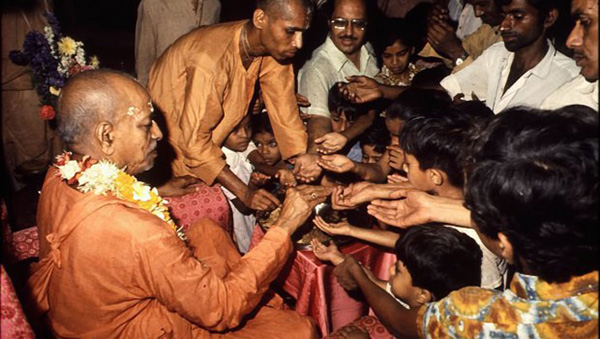 Many people do not know what are GMOs (Genetically Modified Organisms), and how often we end up eating them without knowing it. This has been an ongoing point of discussion for some time amongst those of us devotees who participate at the temple and regularly honor the food that has been offered to the Deities, which turns it into prasad. And we are making changes to the food we purchase and cook and offer to the Deities and accept as prasad amongst the devotees. As we get older, it becomes more important to eat the proper foods. We can more quickly feel its effects. But we must also be similarly concerned what we feed our children. So some devotees have asked me to write and present this information to start bringing it to the forefront for more discussion.

Not long ago, most food was not connected to the idea of genetic modification. Yet these days, most people do not even realize how many types of food have been changed by genetic modification, and how many of the ill effects of this are being felt in many ways. Did you know that:

* Many doctors are starting to cure their patients of various diseases simply by putting them on an organic diet?

* That the Genetically Modified grains fed to pigs turn their gut into mush?

* That there has been a significant increase in what is called "Leaky Gut" amongst children, many of whom eat the same kind of genetically modified grains as fed to the pigs?

* That an explosion of allergies are effecting people and children from foods that never used to cause such problems a few years ago?

* That a steady diet of GMO foods can cause a variety of health problems that can easily reduce your duration of life, and your ability to reach your highest potential, both materially, physically, intellectually and spiritually?

However, do not take my word for it, though I have been studying this for the last several years, and often keeping this information to myself or a select few for fear of being called "an alarmist", you can watch the following videos to see for yourself, and then you will understand why we want to become a "GMO-Free Temple" and offer our Deities and our devotees and congregation the best possible food and prasadam.

This was also why Srila Prabhupada always encouraged us to get land to become agriculturally self-sufficient by growing our own foods. This was not for going commercial, but was simply to feed ourselves, the Deities and the congregation with the most wholesome food available. This is a means to heighten and increase the means to advance spiritually by living a simple and purer life with more wholesome and healthier foods. And these days the best way you can do that is to grow your own food, or at least go completely organic, which we are doing to some extent with our own temple garden. But there is more to do.

So if you truly care about what you feed your children, and in making sure they and yourselves have the best possible foods to eat, then please take an hour to watch this video called "Genetic Roulette" to get a head start on understanding the dangers of genetically modified foods, what they do, how pervasive they are, and what you can start to do about it. You can find this most important and informative video through the following link. You will be glad you watched this, I cannot emphasize this enough.

"Seeds of Death: Unveiling the Lies of GMOs" shows how Genetic engineering is a process where scientists take genes from one species and force it into the DNA of other species. Every single independent study conducted on the impact of genetically engineered food damage organs, it causes infertility, it causes immune system failure, it causes holes in the GI tract, it causes multiple organ system failure….Monsanto's the company that told us that PCBs were safe…they told us that Agent Orange was safe, they told us that DDT was safe. And now they're in charge of telling us that their own genetically engineered food is safe, because the FDA doesn't require a single safety study; they leave it to Monsanto.

Check this out here:

Another way to understand what is happening is to watch this classic video called "The World According to Monsanto" which shows the results and dangers of GMO foods and those made to be "Roundup Ready" based on being able to be resistant to the herbicide Roundup. You can see this through the following link:

Another short video that is very vivid in showing what a constant diet of GMOs can do, is this one, "Understand what GMOs do to your body! RoundUp and Monsanto are killing us!" It explains how lab rats have developed huge tumors because of the GMO diet.

This is just a start. Now it is time for you to become aware of the issue, become educated, help spread this awareness, and now become a part of this discussion and become a part of the solution. Help participate in making our temple GMO-free. More discussions and decisions will be presented later. To share your ideas, simply contact our temple management, such as myself, Jagatguru das, Braja Kumar das, Gokulchandra das, Achyuta Gouranga das (Dr. Ashish Gupta), and others to participate in this discussion.

Finally, for further consideration, here is a recent article called:

What If Your Prasadam Is Genetically Modified?