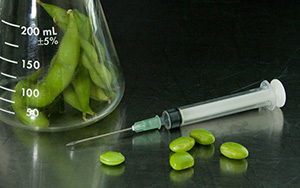 Can eating vegetables with animal genes in them be considered as vegetarian diet?

There is a set of serious questions we must ask ourselves as devotees living in our current time, place, and circumstance: Do we feel comfortable offering foods that have been genetically modified on the altar to our respective Deities? Do we feel comfortable eating these foods ourselves? If these foodstuffs have animal genes in them (which according to Monsanto isn't true, but the potential remains for such a cross-current), would we consider these foods fit for offering or for consumption?

The fact of the matter is that we are already offering and eating many foodstuffs that have been genetically modified. 92% of the soybeans, 86% of the corn, 93% of the canola, and soon a good deal of the alfalfa and rice produced in the United States has been genetically modified in one way or the other. This is an ethical and spiritual dilemma that ISKCON must now consider. Since food is such an important element of our practice and preaching, we must, as individuals and collectively, come to understand the nature of the GMO on what we offer and eat.

I have been reading Acceptable Genes: Religious Traditions and Genetically Modified Foods, a collection of essays edited by scholars Conrad G. Brunk and Harold Coward. In this volume, a number of concerns and questions are raised as to how the phenomenon of GMOs affect the culinary elements of spiritual traditions across the spectrum. As I begin to educate myself more and more on this issue, I hope to keep a level head on the reality of the technology itself.

It is very easy to get caught up in all the potential horror-stories resulting from GMOs run amok, but there are potential benefits to the technology which could increase the efficiency of modern agriculture and help many people who struggle to produce their own food to become more sufficient. I strongly encourage you to do your own detached and level-headed research, because I am not going to tell you GMOs are right or wrong. I have not decided on it either way myself, but there are potential ethical and spiritual issues we must consider.

I asked my fellow Ayurvedic chef Om Rishikesh what he thought of these questions, and he responded with a natural aversion to the whole idea of genetic modification itself. He feels that we shouldn't be messing with natural processes already perfectly created by Krishna, and he especially wouldn't feel comfortable offering or consuming foods with animal genes inserted into them. This is a common reaction which I also share in my own intuition and which throughout Acceptable Genes many spiritual practitioners also share.

Like many technologies (atomic bombs, cell phones, and hydraulic fracturing come to mind), we have rushed into the use of GMOs without getting a full picture of the potential effects to our own bodies and our collective ecology. The major biotech companies have a reputation of stifling independent research into the effects of the technology, and like it or not, in many ways we are guinea pigs in a large experiment over the development of GMO foods whose effects may not be known for many years.

There are also tremendous ethical concerns surrounding the business side of GMOs and biotech, and many protest against the exploitation that occurs against the small farmer who chooses/or is forced to do business with the industry. When we hear the claim that in India “Monsanto’s GMO Seeds Contributing to Farmer Suicides Every 30 Minutes”, obviously our moral and compassionate radar should go on high-alert. We've had more than enough experience that corporate interests often come before human interests, and in the case of such a high-powered industry as biotech, we should be especially vigilant as to the human cost.

Another facet of the debate is whether GMO foods should be labeled. The biotech industry is against labeling because they feel the average customer won't buy foods that have been modified. Many consumers are quite concerned over this, and in California a citizen initiative (“The Right To Know Genetically Engineered Food Act”) could this election season legally require such labeling in that state.

Let me take this back to the level of our devotion. When we offer food on our altar, we hope that the offering is made up of the very best we can give, from the physical nature of the food itself to the love for Krishna that we are developing in our consciousness.

We are, or we should be, very particular about where we got the food, how we cooked it, and how we presented it. We may have a tendency to not be as educated as we should be as to where our food is coming from, and to what might be in it. I am guilty of this as anyone, for the supermarket has captured our conditioning for convenience, often at the expense of our conscience.

In Acceptable Genes, distinguished scholar Vasudha Narayanan approaches the question of GMOs as it relates to Hindu ritual/offering in her essay “A Hundred Autumns To Flourish”. Her approach is generally liberal, leaving open the potential reality that GMOs may have many positive social benefits, and that across the Hindu diaspora there is enough flexibility also to comfortably incorporate GMO foods into one's daily diet.

When it comes to the question of the formal ritual of offering food, she reasons that for most Hindus, the question of the purity of the food being offered would override any convenience or potential benefit of its being genetically modified, especially in terms of inclusion of animal genes. She writes:

The hot button for many Hindus would be the introduction of what is regarded as animal genes into vegetables, fruits, or grains. If the origin, however remote, is an animal, then the modified food would be considered “impure.”

But it is not just animals; we cannot even put traits of onions or garlic into other food, because the modified food then become impure and unfit for ritual use. Similarly, genes from a grain into fruit would be troublesome to those Hindus who fast on some days and abstain from all grains.

Thus, if GM foods have “impure” genes in them, they would almost definitely be rejected for ritual worship.

I think it is safe to say that we as devotees share these same concerns and would have the same reactions. It is already complex enough for many of us to try and insure the purity of the foods we cook and offer to the Lord, hence the need and responsibility for us to make sure we educate ourselves on this issue.

Above all, I think this dilemma calls out more and more for us to continue to try and fulfill Srila Prabhupada's desires for sustainable rural communities where we can grow our own food. I also think the best solution at hand for the moment, while the many ambiguities surrounding GMOs are hopefully sorted out, is for us as devotees to make commitment to using foodstuffs from our own sustainable communities if possible (check out the awesome CSA from Gita Nagari Yoga Farm if you live nearby), and beyond that to buy and use foodstuffs from certified organic sources.

With the wisdom of our own tradition as well, in relation to the collective ecology we can share, let us try to bring clarity from our own end as to the potential benefits/drawbacks of GMO technology and our food. We want to make sure that what we put into someone's stomach to affect their heart and soul is going to give them the best possible benefits.