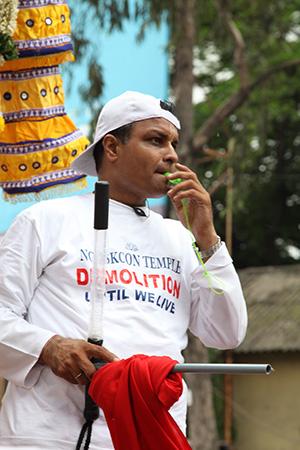 Andhra Pradesh government and ISKCON Secunderabad are back in news again, after a lull of five long years. This time it is skyrail and the government wants to plough it right through the ISKCON temple. And the determined temple devotees are giving them a tough fight.

In last few days, the issue has incensed public sentiments and media is providing daily coverage. Hindu organizations, prominent citizens and political factions have offered their support for the temple cause. So far 985 devotees have vowed to sleep in front of any bulldozers that might dare to touch the temple walls. They are known as 'Over Our Dead Bodies volunteers' and their number is set to swell in next few days. The government has given a deadline of 27th July for the temple to file its objections and at least 10,000 letters from its followers will be filed as ISKCON Secunderabad's official reply.

This is not an isolated incident but an overall indication of the state of hindu temples in Andhra Pradesh. In this state, the Endowment department controls more than 31000 temples and all the bureaucracy and corruption has taken the life out of these temples. Their lands and properties worth billions have been illegally occupied and the government has remained a mute spectator or an accomplice. But in case of Christianity and Islam, their places of worship are not under the government's control.

Few years ago, Andhra Pradesh government issued an order to allot 6 out of 7 hills to other religions on Tirumala hills, claiming Balaji owns only one out of the seven hills. But Balaji's another name is 'Lord Of The Seven Hills' and after the Hindu leaders protested, the government had to withdraw these controversial orders.

Of course not only the state government, the policies of the Indian government in general have been against the interests of hindu temples, especially in the post-independence era. The present case is just another example of this.

In ISKCON Secunderabad's Ratha yatra on 9th July, hundreds of devotees wore the T-shirts and caps with the message, " No ISKCON Temple Demolition Till We Live".

The complete updates are available on our site : attackonhinduism.com

How the government is going back on its promise : http://www.attackonhinduism.com/broken-promises.html

How the government is ignoring other alternatives : http://www.attackonhinduism.com/gross-injustice.html

Awareness is building up : http://www.attackonhinduism.com/public-awareness.html

We request every one to share this message and give their blessings in this great war to protect Srila Prabhupada's property. The public opinion is building up and statewide and nationwide campaign plans have been drawn up. The story of the sparrow and ocean is our inspiration and we will leave no stone unturned in this great attempt.