A tremendous disaster scene is unfolding in the Char-dham region of the Himalayan state, Uttarakhand. While the ancient Kedarnath temple has survived tsunami-like flooding and landslide, virtually everything around the temple has been destroyed. Highlights from the many reporting news agencies include the following:

Kedarnath, the epicentre of the devastation, remains near-impossible to reach. Bad weather this morning prevented military helicopters from landing there. At least eight villages around the Holy Dham are feared washed away.

With the Supreme Court's blessing, battalions of helicopters are being deployed to rescue flood more than 70,000, who are trapped in terrible circumstances with little food, potable water or medicine.

Over 5,000 people remain trapped in and around the famous Kedarnath temple. Pilgrims were visiting the 1,000 year-old shrine before it closed for the monsoon season, which arrived two weeks early and with relentless force. Another 15,000 are stuck at Badrinath, and pilgrims are no doubt also trapped at the less-visited Gangotri and Yamunotri Dhams. 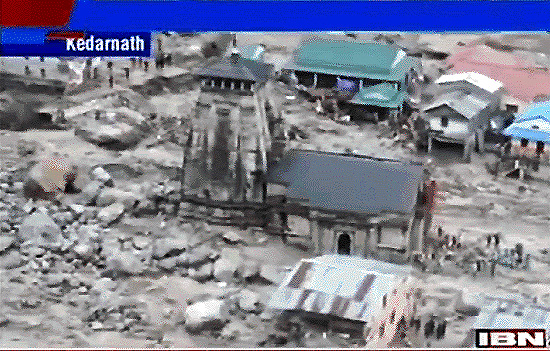 The Kedarnath temple is submerged in slush and mud, the main doors torn off, but the temple is not otherwise badly damaged, and Lord Kedernath remains unharmed. But because roads all around the Dham have caved in, the temple will be off-limits for anywhere from one to three years, local officials estimate.

Long stretches of multi-storied buildings, homes, temples, bridges and cars were swept away, including not only those right beside the raging river, but also those sitting well above it, as the tremendous volume of rain collapsed the earth, sending buildings and people careening into the rushing waters.

What is being described as a "Himalayan tsunami" was triggered by excessively heavy rainfall exceeding 220 mm (8.6 in) on Sunday, at the Ganges headwaters. Tuesday marked the observance day of Ganga-puja, Mother Ganges' descent to earth, and this is always a busy time for pilgraiminage to Kedarnath.

Just three miles further north across the Kedar Dome mountain peak lies the Charbari glacier. The rains also appear to have breached the glacier, sending a huge torrent of ice, rock, mud and water across the mountain, adding to the deluge engulfing Kedarnath Dham.

Indian Express reports: "It is unclear how many pilgrims and priests died at Kedarnath, but the account of one survivor, Kalyan Singh Jadaun, a middle-aged shopkeeper from Rajasthan, suggests a heavy loss of life. Jadaun and his wife had just emerged from a guest house at 6.30 am on Monday to join a stream of pilgrims heading toward the temple when the debris began rushing in.

"We were walking the 50 metres to the temple when we saw a huge chunk of ice and rock breaking not far away, and heard commotion and shouting. Local priests were telling people to run to high ground as the glacier broke up and a huge stream came rushing down the mountain. We ran back to our house. There was a mad scramble to climb the stairs to the third floor as everyone tried to reach as high as they could."

In the melee, his wife was pushed back and when the torrent of water hit the building she was still on the second floor. "It swept her away, tossing her along with rocks and huge blocks of ice," said Jadaun. "I saw her being washed away." Jadaun was rescued by an army helicopter. He said that after the deluge he saw "a large number of bodies strewn around" Kedarnath.

Heavy rain and swollen rivers also caused havoc over a swath of mountainous territory extending from Kedarnath down to the plains, washing away homes, hotels, roads and bridges. The impact was also felt in the western Himalayan state of Himachal Pradesh, where many foreign tourists were also stranded. Even parts of the capital, Delhi, are flooded due to the overflowing river Yamuna."

And as reported by Sakal Times, Dehradun:

Grim tales of death, destruction and food shortages poured out of Uttarakhand Thursday as about 70,000 people still remained trapped in the flood-ravaged hills waiting to be rescued. With the magnitude of the misery caused by weekend torrential rains and flash floods becoming clear, officials admitted it may take three years or so for pilgrimages to resume to the revered Kedarnath shrine.

B.D. Singh, chief executive officer of the Badrinath-Kedarnath Temple Committee, told IANS: "What we are seeing is very painful and unbelievable. We don't expect the Char Dham Yatra to resume in the next three years."

Another official said the Kedarnath shrine, built by Adi Shankara over 1,000 years back, survived the devastating floods but virtually everything around it had been destroyed.

"Call it a miracle but the Nandi statue and the other idols in the temple are intact," the official told IANS. "Pilgrims who were in the temple when the disaster struck also survived.

"But the destruction all around the temple has been terrible," he said, adding the death toll in the floods and cloudburst could be much more than the officially stated 150. Ram Bada, located about seven kilometres from the temple, has been reportedly destroyed, he said. "There were 5,000 people at Ram Bada when a cloudburst took place."

Military, paramilitary and civilian authorities were engaged in a massive rescue operation in the state but one officer said the weather was unfriendly for rescue by air.

Many of those stranded were moved to Rishikesh near Haridwar. The highways linking Rishikesh to Joshimath and Uttarkashi were now open.

Uttarakhand Chief Minister Vijay Bahuguna has described the flood fury as a "Himalayan tsunami" and said he was numbed by the magnitude of the death and destruction. He said many kilometres of roads had been washed away. Many bridges, houses, water lines, canals, check dams, electricity lines, power houses and other public and private property had been severely damaged.

"At this moment, affected people need our help to tide over the calamity that has fallen upon them to survive and rebuild their lives," he said, urging people to "stand with our distressed fellow countrymen, and actively participate in national efforts to support them in their difficult time".

More than 20 helicopters are engaged in rescuing those stranded, including pilgrims on their way to or returning from the Kedarnath shrine.

Officials said that while the evacuation process had been fast-tracked, more than 70,000 people were still stranded at various places in the hill state.

"We are trying our best but there are limitations. The army is working under testing times," said an army official.

More than four days after the cloudburst and incessant rains led to misery, the thousands caught up at various places were faced with lack of potable water, food and power.

Many of those who have returned told IANS that the stranded do not have enough food and prices of even potato chips and mineral water had shot up.

"There is an acute shortage of drinking water, medicines and food. One can't imagine the situation," said a pilgrim from Basti in Uttar Pradesh rescued by a private chopper. To bring back his family of five, he said, he had to cough up Rs.11 lakh on touch down at Dehradun. 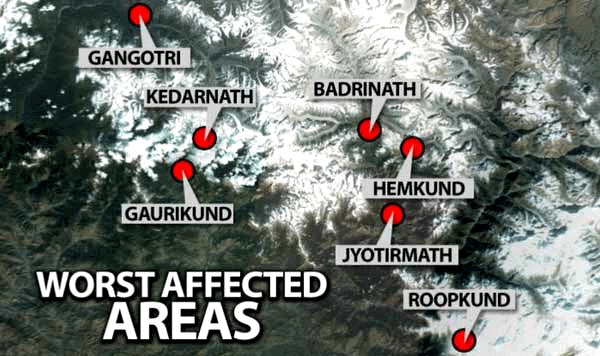