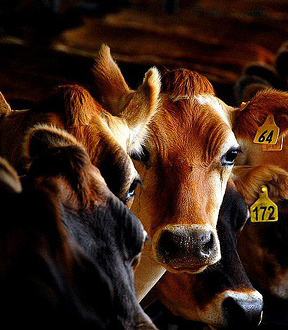 You know that child who throws a terrible tantrum over a glass of milk. How he kicks and screams and refuses to touch the stuff? Haven’t you wondered what the fuss is all about? After all, it’s just a glass of milk.

It turns out the child may just have the right idea. The business of producing milk — indeed, the multi-crore rupee cattle industry it’s a part of — is sustained by a process of relentless cruelty towards animals, from birth till death, with little letup. Cruelty compounded by poorly defined, poorly implemented methods and gross violations.

In 1998, India, hitherto a milk-deficient nation, surpassed the U.S. as the highest milk-producing nation, a position it holds till date. According to the Department of Animal Husbandry, Dairying and Fisheries, the government has invested Rs. 2242 crore to help meet a national demand of 150 million tonnes of milk by 2016-17. Millions of cattle will be produced (mainly through artificial insemination) for this purpose.

The government is positioning this as a food security measure for the future. From the point of view of the animals, though, unthinkable cruelty lies ahead.

That image of tender care and worship that we are raised with, the image that is propagated in films and integrated with our cultural values — that’s a myth. In reality, the life of a cow in India is a horror show.

The first three stages of life — birth, maturity and motherhood — happen with inhuman haste. The female calf is born. She reaches puberty somewhere between 15 months and three years of age, depending on the breed, and is then impregnated, increasingly through artificial insemination.

Arpan Sharma, external relations in-charge at the Federation of Indian Animal Protection Organisations, builds partnerships for better protection of animals by bringing together various stakeholders such as industry, government and regulators. He says, “Due to poor equipment and a lack of proper training, artificially inseminated cows sometimes become infertile and develop infections with few to care for them.”

Soon, the calf is born. While the cow is seen as a metaphor for motherhood, she is rarely given a chance to experience its joys for very long. Calves are separated from their mothers soon after they are born so that they don’t drink up all the milk. Just what does this do to these docile creatures?

The American physician Dr. Michael Klaper, the author of books such as Vegan Nutrition: Pure and Simple and Pregnancy, Children, and the Vegan Diet, provides an insight. “On the second day after birth, my uncle took the calf from the mother and placed him in the veal pen in the barn — only 10 yards away, in plain view of the mother. The mother cow could see her infant, smell him, hear him, but could not touch him, comfort him, or nurse him. The heartrending bellows that she poured forth — minute after minute, hour after hour, for five long days — were excruciating to listen to. They are the most poignant and painful auditory memories I carry in my brain,” he said in a 2010 interview with the Northwest Veg, a non-profit organisation based in Portland, Oregon.

Eileen Weintraub of Help Animals India and Vishakha Society for Protection and Care of Animals, Vishakhapatnam, takes this fact to its logical extreme. She states firmly, “With 1.2 billion people and 400 million vegetarians, anyone who does not have a vegan diet contributes to the suffering of cows.”

I once asked my mother, “If we take milk from cows, then what does the calf drink?” She said the milk a cow produces is more than the calf requires, and humans use what’s left over.

Apparently not. “The quantity of milk a calf gets varies. By and large, unless the calf is what is called “replacement stock,” it will get only the bare minimum necessary for survival. Often it will not even get that,” says Sharma.

To increase yield, the cows are also injected with Oxytocin, a hormone banned in India under the Prevention of Cruelty to Animals Act and section 12 of Food and Drug Adulteration Prevention Act, 1960. “Studies around the world show that cows injected with Oxytocin have a greater incidence of abortions, mastitis and lower conception rates, and their calves suffer higher than normal infant mortality and delayed puberty,” says Erika Abrams, founder of Animal Aid Unlimited, an animal rescue organisation based in Udaipur.

And what happens to unwanted male calves? This is where we wade into the red zone of this bloody business. “Milk cows need to produce a calf every year and half those calves are male. While a fraction of these are used to pull ploughs, others are butchered. Their skin is used for leather, and their meat for local consumption and export,” says Abrams. Calf leather comes from male calves of which India has a huge number.

The ones that live don’t fare much better. With traditional backyard agriculture slowly giving way to ‘intensive dairy farming’, hundreds of cows are confined for long periods within cramped, dark and acrid quarters. “More times than not even where there is a lot of space they are tied with a two-foot rope and in most cases all they can do is sit down and stand up even if they are in the open,” says Nandita Shah, Director at Sharan, Sanctuary for Health and Reconnection to Animals and Nature, Pondicherry. “At some places in Mumbai, calves are tied outside till they die of starvation; so technically they have not been killed.”

Divya Narain, an animal rescue volunteer from Bhopal, says, “At the State-run animal shelter in Bhopal, we often get recumbent little male calves, which have been dumped on the streets to die.” In other words, male calves, more or less, suffer an early death.

And what about cows? Cows and buffaloes can be productive until about the age of 14 years. But in the existing set up, in which cows are kept pregnant for almost 300 days a year, most of them dry up by the age of five or six. And after spending most of her life being milked, enduring hormone injections and the trauma of separation, the cow is sent off to the slaughterhouse.

Twenty-eight Indian states have cow-slaughter protection legislations in place. Unproductive cows, therefore, are routinely trafficked to slaughterhouses in the states where laws are less stringent or non-existent — Arunachal Pradesh, Meghalaya, Mizoram, Nagaland, Tripura, Lakshadweep, and especially Kerala. A large number of cattle is trafficked to Kerala, under inhuman conditions, from the neighbouring states as it is a major consumer of beef and does not have any regulation pertaining to cow slaughter. Apuroopa Podhardha, the legal adviser of People for Cattle in India (PFCI), a Chennai-based animal rescue group, says, “Thirty animals are crammed into a truck meant for six. In some instances, the legs of calves are tied and they are dumped in one on top of the other. Furthermore, no provision for food or water is made”. Cattle are also trafficked to West Bengal, from where they are taken to Bangladesh.

PFCI has conducted three cow-rescue operations in Chennai. Podhardha’s colleague Arun Prasanna G. says, “The latest delicacy in demand in the Middle Eastern markets is veal (the meat of a calf no older than three months). Flesh of unborn calves is known to bear medicinal value hence pregnant cattle are slaughtered.”

Prasanna says, “In many slaughterhouses, the act of slaughtering involves smashing the head of a cow with a sledgehammer, which renders it unconscious; then skinning it; and or hanging it upside down so that all the blood can be drained from the slit jugular vein, then skinning it live.” In a recent raid in an illegal slaughterhouse in Chennai recently, there were 20 cattle. “We could only rescue six of them. The police insisted we file a complaint first, which gave the cattle owners time to hide the remaining cows.” The slaughterhouse owners received an anticipatory bail.

According to the Ministry of Food Processing Industries, India has 3,600 slaughterhouses, nine modern abattoirs and 171 meat-processing units licensed under the meat products order. These do not include the numerous and ever-growing number of illegal and unregulated slaughterhouses, estimated to be more than 30,000. According to the U.S Department of Agriculture’s report on Livestock and Poultry: World Markets and Trade, India became the biggest beef exporter in the world in 2012(till October) with 16,80,000 tonnes of beef and veal exports, followed by Brazil with 13,94,000 metric tonnes and Australia with 13,80,000 metric tonnes of exports. In 2013, India’s beef exports are forecast 29 per cent higher to a record 2.16 million tonnes, accounting for nearly a quarter of world trade.

“The government gives subsidies to slaughterhouses because beef exports are a gold mine,” says Prasanna. A US beef export federation study states India exported $1.24 billion worth of meat in the first half of 2012. According to Tamil Nadu Veterinary and Animals Sciences authorities 1.4 million tonnes of cattle were legally slaughtered in 2012 nationwide.

“One dead animal is worth approximately Rs. 30,000. Tissues from a cattle’s heart are used to rebuild livers. Horns and hoofs are used to make buttons, skin is used for leather, flesh for meat, tail is used for fertility treatment, bones are used for whitening sugar, and producing gelatin,” says Prasanna.

In states such as Madhya Pradesh, where cow slaughter is illegal, trafficking is rife, and the dry cattle that are not transported are let loose on the streets, where they live the last days of their lives foraging in dustbins, eating plastic-infested garbage and drinking polluted water from open drains.

The government runs several goshalas, shelters for old cattle, across the country, but these are too few and are not governed by serious norms. Suma R. Nayak, an advocate and a trustee of the Animal Care Trust, Mangalore, says, “Goshalas have started to operate along the lines of dairy farms; only accepting healthy, productive cows.”

For all this, milk may not even be as rich in calcium as we have been led to believe. Amy Lanou, Ph.D., Nutrition Director for the Physicians Committee for Responsible Medicine in Washington, D.C., says, “The countries with the highest rates of osteoporosis are the ones where people drink the most milk and have the most calcium in their diets. The connection between calcium consumption and bone health is actually very weak, and the connection between dairy consumption and bone health is almost non-existent.”

Also, the growing numbers of cattle casts a heavy shadow on the environment. Bovines produce methane when they pass gas. It is estimated that a bovine produces, depending on the breed, anywhere between 100 litres to 500 litres of methane a day. This is equivalent to the per-day carbon dioxide emissions of a car. India’s huge bovine population makes methane a dangerous pollutant.

There is also the ecological problem. Producing fodder for 324 million cows puts immense strain on scarce land and water resources.

The Humane Society of India’s report states: Animal agriculture occupies 30 per cent of the earth’s total land area. Approximately 33 per cent of total arable land is used to produce feed crops, in addition to vast areas of forested land that is clear-cut to graze or grow feed for farmed animals.

What, then, is the alternative? Narain, who is also a major in Ecology from the University of Oxford, suggests a plant-based diet.

“The government is using taxpayer money to subsidise dairy products (and indirectly the leather and beef industries). What it should be doing is to promote the production of protein-rich plant-based foods such as legumes, soybeans, pulses, fruits and nuts using the land and water resources that are otherwise used to produce cattle feed. That, and only that, will work if we are to put food on the plates of our starving children.”