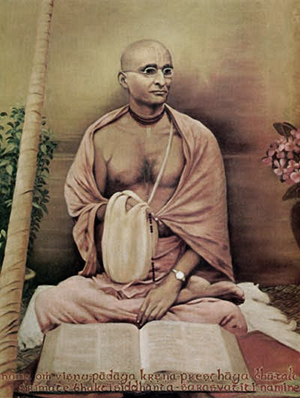 We often hear that the different systems of religious currents in India have more or less derived their origin from different interpretations of Vedānta. No one is recognized as the leader of the school unless he can maintain his position as commentator on Vedānta-darśana. Vedānta-darśana is the treatise on Vedānta as well as an authoritative refutation of all those systems that might oppose the original source of the religions of India. Two contending parties have decided the fate of India’s religious domain. These are, one, the philosophers who have a tendency to differ from the religionists on account of their rationalism, and two, the communities who have secular views different from those entertained by religionists. Earlier implementations of religious systems had less developed interpretations of how society should utilize them. But as they were opposed by different scholastic views, they mended their course a little to meet the invaders and rebuff their exploitations. The concise aphorisms of Vedānta were meant to give an undeviating decision on the apparently conflicting impressions of the hymns of the Vedas. However, there were attempts made to frustrate the aim and object of Vedānta and thereby gain some designed results. These transpired according to the whimsical temperament of the anti-Vedāntists who had the inimical motive of attacking the undeviating devotional principle. The author of the aphorisms detected within himself an apprehension that such insinuations might arise, so he undertook the task of furnishing a true interpretation that might check the potential exploiters, reveal their ridiculousness, and thus prevent them from diverting the people from the Absolute Truth. The Purāṇas are the supplementary, elucidating religious instructions of the Vedas. People who are interesting in having the Vedas interpreted in their own light demand supporting views to foster their cause; and so the supplementary instructions were written to suit the different tastes of passion, ignorance and goodness. The sattvatās prefer goodness, and are truly ethical, where as the other two are busy maintaining their respective notions. The aphorisms as explained by the commentators of the other two schools – namely the tamasas who prefer ignorance and the rājasas who prefer passion – seek to disturb the inner essence of the author of Vedānta by their commentaries. At present we have in our possession a dozen commentaries on the aphorisms of Vedānta. It is difficult for a reader to select the genuine commentary of Vedānta-darśana when the commentators themselves are more or less victims of misconception (bhrama), inebriation (pramāda), defective observation through sensuous experience, (karaṇāpāṭava) and instigation of delusive enterprises by dissuading others from the Truth (vipralipsā). _____________  Commonly defined as the cheating propensity, as illustrated by demanding that an apparent truth is conclusive after examining only the most superficial evidence. It is said that a true sage is quite free from these defective traits; so we should rely on the true devotees, who have no other ambition than to serve the Absolute. Those commentators who have some definite ulterior motive design their explanations to mislead honest but unwary inquiries. Their stifling suggestions oppose the true functions of the unalloyed soul and often lead to the delusive features of the non-absolute. We cannot expect the Positive Truth from the pen of commentators who are victims of the triple qualities [or three modes] of this defective and limited world. Most of these commentators are misguided by their own faulty preceptor. Some are found to be impelled by their own short-sighted policy, they are unaided by the Personality of the Absolute because of their non-devotional attitude. And some have an unusual affinity to lord it over finite things. Hence, setting out on a quest for the genuine commentator of the aphorisms of Vedānta has become a puzzling problem. Each writer comes forward with his own treatise which, he says, is “the” genuine commentary on the aphorisms. Yet none of these commentators has provided explanatory ślokas culled from the vast religious lore side-by-side with the aphorisms. By exploiting this loop-hole, they introduce their whimsical writings as true explanations of the aphorisms, asserting at the same time that any passage of Śrīmad-Bhāgavatam that contradicts them is actually vague in itself. In contrast, the great devotees, the bhāgavatas, always read Śrīmad-Bhāgavatam with intense scrutiny, and substantiate every assertion by recollecting the appropriate aphorisms and exactly dove-tailing them into the correct context. So Śrīmad-Bhāgavatam should have the first place among the dozen schools of commentaries, and whenever there is any conflicting view in the writings of the commentators, a reference may be made on the point, to the genuine commentary of Vedānta-sūtra: Śrīmad-Bhāgavatam.