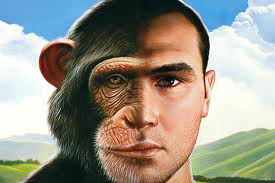 Is man an animal?

According to the current evolution theory, he is. This piece of info has turned out to be so exciting to an evolutionist recently that it has enthused him to exultantly write an entire book, The Third Chimpanzee, just to disclose to the humanity this novel secret that man is none other than an outright animal, an advanced chimp!

Undeniable, man exhibits animalistic features and propensities, strong enough to categorize man as animal. At best, according to present bioscience, man is an intellectual animal. Vedic scriptures explain that there are four basic animal propensities. Eating, sleeping, mating and defending. These are bodily urges, common to both animals and humans. But there is something extra in human life-spiritual inquisition-the propensity to enquire after reality of one's original identity, the eternal spirit, and the supreme absolute truth. That differentiates a man from an animal. Otherwise however sophisticated one becomes at doing the four things, one will remain in the animal status.

Srila Prabhupada: "The bird has got also certain qualifications. What is this? You cannot jump over like that. Just see how it is doing, a small bird. He has got complete sense how to protect. He's doing his business. So everyone has got some qualifications, by nature's gift. One bird can go seven miles away and he can see where is his food. You cannot see half a mile even. What is the value of your eyes in comparison to that bird? There are so many wonderful things done by the animals, without any scientific knowledge, so-called scientific knowledge. So scientific knowledge for material comforts, that knowledge is there even in the birds and beasts, for material comforts. They know how to do it. Why these laboratories? There is no need of. Because if your knowledge is for these four things, eating, sleeping and mating, then what is the value of such knowledge? The bird will also die after eating, sleeping. You'll also die after eating, sleeping. Then where is the advancement of knowledge. You have not improved in any way than the birds and the beasts. You cannot check death. The bird also cannot check death. Then where is the advancement? Simply the bird is finding out food by the beaks, and you eat on a table, chair. Therefore you are advanced? You are also eating, he's also eating. He's eating his own way. You are eating in your own way. Does it mean advancement? But when death comes, the bird will be also kicked out, you'll be also kicked out. Then where is your advancement?"

Doubtlessly, modern education has sharpened human intellect so that human society has become materially affluent, and the world displays dazzle. But it has its inherent drawbacks too, which need to be addressed. Modern education is punctuated by a gross disregard of the wellbeing of the soul, the real person, and indifference to the Supreme Lord, the origin of everything animate and inanimate in the cosmic creation. Driven by materialistic principles, today's materialistic education is misleading people by motivating them to concentrate only on the comforts of the material body, which is temporary. A mad money-making race is on, and nobody's hunger for money is satiated even if with a sharpened intellect his is able to amass a sum amounting to a ten digit figure.

The aimlessness of present materialistic education is nicely exposed by a student orator at Harvard University on the occasion of giving a speech after receiving his degree there: "Among my classmates I believe that there is one idea, one sentiment, which we have all acquired at some point in our Harvard careers, and that is, in a word, confusion. They tell us that it is heresy to suggest the superiority of some value, fantasy to believe in moral argument, slavery to submit to a judgement sounder than your own. The freedom of our day is the freedom to devote ourselves to any values we please, on the mere condition that we do not believe them to be true."

The voice of the President of John Hopkins University, Steven Muller rings in the same tune: "Universities are turning out highly skilled barbarians because we don't provide a framework of values to young people, who more and more are searching for it."

What kind of perfection we can expect from an education which makes us only matter-conscious and keeps us blind about the life-spark, the spirit soul that radiates consciousness-the most valuable thing in cosmic manifestation? Institutions now begin using surveillance cameras in the classrooms to resist the trends of campus violence, drug addiction, pornography and so on.

Srila Prabhupada explains that knowledge is a must for human society, that is why so many educational institutions exist. Animal society does not need a college. But presently, out of millions of educational institutions spread over the globe, not a single institution is dedicated to teaching the knowledge of the self. All institutions are employed to promote bodily comforts of humanity, though the hard truth is that none is the body. This paradox escapes notice of the educationists and the academic world. Education today is out and out materialistic as it deals with only the phenomenal, material world, and its prime aim is the upkeep and comforts of the material body. It leaves no provision for imparting to students the spiritual science.

Srila Prabhupada: "There are big, big institutions for technology, how a motorcar can move, how airplane can move. So many machinery they're manufacturing. But they are… There is no educational institution how the mover, the spirit soul, is moving. That is… That is called avidya, nescience. The actual mover is not being studied, but the external movement is being studied. Big, big institutions, universities, there are. As I told you the other day, when I lectured in the Massachusetts Technological College, so I inquired that "Where is that technology to study the mover?" But they have no such arrangement. They could not answer satisfactorily. So that is avidya. So here, in the Isopanisad, it is said, Those who are engaged only in material advancement of education, the result will be that they will go to the darkest region of existence. It is very dangerous position that at the present moment there is no arrangement in any state, all over the world, about spiritual education. It is pushing the human society to the darkest region of existence. Actually, it is happening so. In your country, your rich country, you have got nice educational system, so many universities, but what class of men you are producing."

"In your country (USA) the dog is protected, and the cow is killed. The dog is passing stool and urine in the street, he is considered the best friend of man, and the cow is all pure, stool, urine, and milk, but they are taken to the slaughterhouse and killed for food. What kind of civilization is this?"

Source: Science and Spirituality in the Space Age World by Govardhan Gopal das