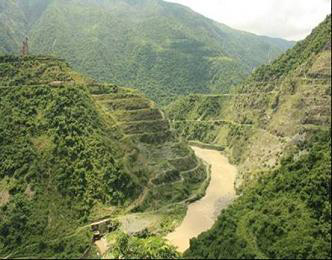 We the signatories to this statement would like to bring some key issues to the attention of all concerned on the proposed Lakhwar Dam Project on the Yamuna River in Upper Yamuna River Basin in Dehradun district of Uttarakhand state.

The proposed dam involves a massive 204 m high dam with storage capacity of 580 Million Cubic meters, submergence area of 1385.2 ha, including 868.08 ha forest land, at least 50 villages to be affected by submergence of land in the upstream, many more in the downstream area. This site is just about 120 km downstream of the river’s origins from the holy shrine of Yamunotri. The composite project involves, in addition to the Lakhwar dam with 300 MW underground power house, another 86 m high Vyasi dam with 2.7 km long tunnel and 120 MW underground power house and a barrage at Katapathar.

As can be seen from the details below:

a) The project has not undergone basic, credible environment or social appraisal in any participatory manner.

b) It does not have legally valid environment or forest clearance.

c) There has not been any cumulative impact assessment of various existing, under construction and planned dams and hydro-projects in the Yamuna system.

d) There has not been any credible assessment about options for the project.

e) The project is to come up in an area that is seismically active, prone to flash floods and also prone to erosion and land slides.

f) The spillway capacity of the project has been awfully underestimated resulting in significant risks of dam damage / breakage with concomitant risks of unprecedented downstream flooding and destruction. It may be mentioned here that Delhi is a major city standing in the path of the river in the downstream area.

g) The religious and spiritual importance of the Yamuna River is at risk since whatever remains of the river will be completely destroyed both in the upstream and downstream of the project.

h) No agreement exists among the Upper Yamuna basin states about sharing of costs and benefits of the project, which should be a pre-condition for taking up any such project.

i) It is well known that Yamuna River is already one of the most threatened rivers in the country and the project shall further adversely affect the river system.

Recently as well as earlier last year thousands of people from Allahabad/ Vrindavan marched to Delhi, seeking a revival of their river Yamuna. The focus of the authorities should be on ways and means to restore the river Yamuna system rather than take such massive project without even basic appraisal.

We thus urge the official agencies at both the state and at the centre level to not go ahead with this project. We urge them to rather take steps to protect and preserve than destroy one of the biggest and culturally important river, without even basic appraisal at project or basin level or any options assessment carried out in a due participatory manner.

We hope that the government will not go ahead with this project until all the issues mentioned have been satisfactorily resolved.