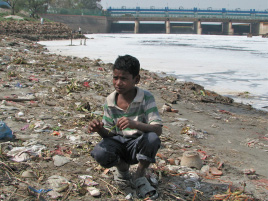 A forthcoming documentary that highlights the plight of the Yamuna river, through the lives of children interconnected with it, is sure to both shock viewers and move them deeply.

Writer, director and producer Krishna-lila Dasi (Krisztina Danka) began the project last spring when ISKCON’s Governing Body Comission resolved to officially support the Save the Yamuna Campaign coordinated by Maan Mandir of Varshana, and asked her to create a short video to raise awareness.

The resulting six-minute film, Yamuna: The Stolen River, was selected by the environmental online film festival Green Unplugged, and will be shown on its website www.cultureunplugged.com next month.

But Krishna-lila felt that the topic was so grave and important that it warranted a feature-length documentary.

Pairing the project with a film she had been commissioned to shoot for the Temple of the Vedic Planetarium in Mayapur, West Bengal, she didn’t have to worry about traveling to India or amassing a film crew. 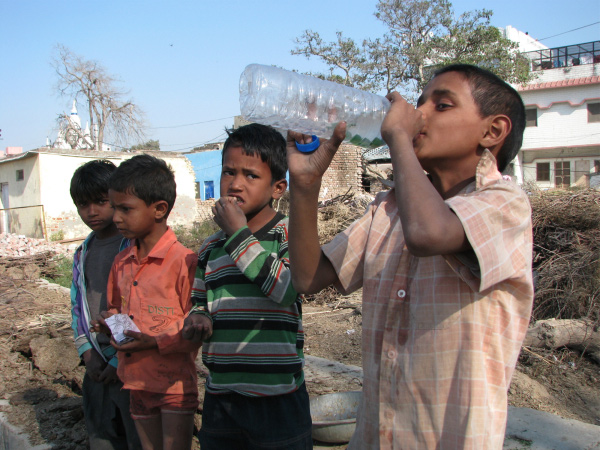 23% of the children living in the Yamuna area are poisoned

But apart from other expenses, she had to finance the shooting on location in the sacred towns of Vrindavana, Varshana, as well as in Delhi and Haryana herself.

“I had to sit down with my husband and have a serious discussion about whether we could afford it or not, especially having a little daughter to take care of” she says. “My husband was very supportive. He said, ‘Even if we lose this money, we’re going to lose it for a noble cause.’”

The over an hour-long documentary, shot over two weeks in February and March this year, explains how 97% of the sacred Yamuna is held back by an irrigation dam in the state of Haryana, and the rest is completely replaced with sewage and industrial waste in Delhi. 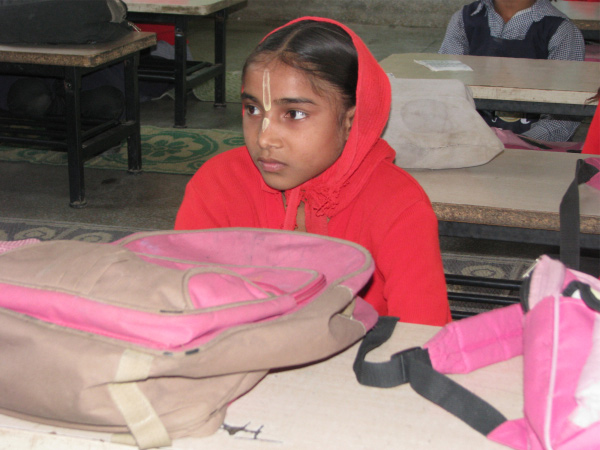 Infant mortality is especially high near the river. At 9 months old, Devaki was dying of typhoid when Rupa Raghunath and the Food for Life team of Vrindavan found her and saved her.

But mostly it tells the heart-wrenching story of the children affected by this environmental disaster, which has been essentially ignored for the past thirty years.

Millions have fallen ill, and infants, young children and farm animals are dying by the thousands. Twenty-three per cent of children living near the Yamuna suffer from arsenic and lead poisoning and other water-borne diseases. Others are dying of typhoid, while the infant death rate is particularly high.

“The film is shocking, because the reality is shocking,” says Krishna-lila. “Unless people’s hearts are touched, there will be no change.”

The children Krishna-lila and her crew interviewed come from Vrindavana, Varshana, and Delhi.

There’s ten-year-old Ronak, a Brahmin boy whose family has been worshipping the Yamuna for the past 500 years. 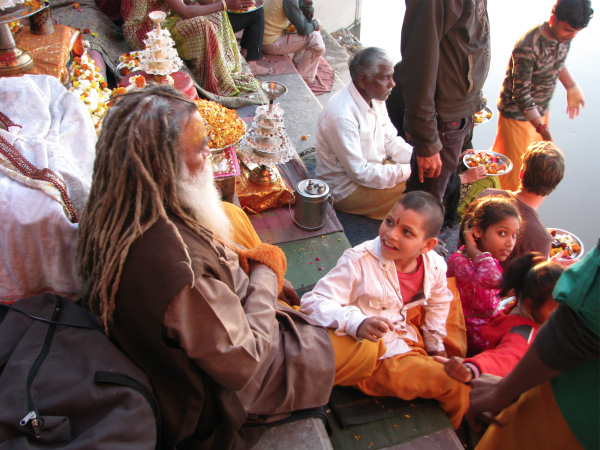 Ronak (right) chatting with his grandfather just before starting their daily Yamuna-puja.

There’s Krishna, a 9-year-old girl who has contracted typhoid from the river.

And there’s Titu, 12, who quit school to get a job fishing dead bodies out of the toxic river at the Okhla Barrage in Delhi.

“That was a tough interview,” Krishna-lila says. “Right next to him there was a family who would just push the foam created from chemical waste away, and dunk their two year-old fully under the water. I asked them, ‘Why do you do that? Don’t you see it’s dirty?’ They said, ‘Yes, we see, but this is Shiva Ratri, and our religion requires a holy bath.’ They don’t realize that they’ll get typhoid or kill their kid by lead poisoning. The level of unawareness is stunning.” 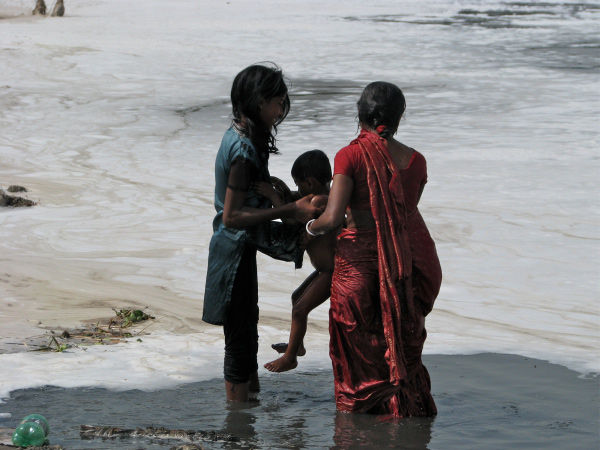 Others, even children, are all too aware of the state of their beloved Yamuna. Many belong to farming and cow herding families whose livelihoods are being destroyed by the pollution.

“My parents are farmers,” says Larili, 9. “And because of the polluted Yamuna, the earth is getting very poisonous, and the crop spoiled.

In the film’s trailer, 12-year-old Bhagavati watches with a kind of numbed grief as one of the cows her family takes care of is carted away after dying from drinking Yamuna water.

Many of these children are grimly determined to do anything it takes to save the Yamuna, laying out their hearts in the film in a way that’s guaranteed to move the hardest heart. 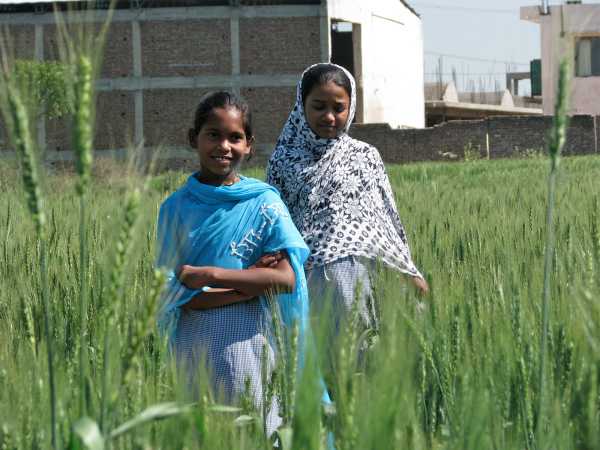 Jyoti and Larili are ready to fast till death to rescue the river Yamuna.

“When I grow up, I want to be a good devotee and bring Yamunaji back,” says Madhuvani, 6.

Most striking is Jyoti, a 10-year-old girl with soulful eyes and the deep gravitas of a much older soul.

“Yamuna is our mother,” she says. “If somebody’s mother is captured, what will go through the hearts of her children? All of us feel very sad that our mother has been captured and not let free.”

“I am going to Delhi to protest for our Yamuna river. We are ready to fast till death, to give up our lives,” she adds, her jaw set firmly. “Whatever it takes, we will fight for this cause.”

Seeing this kind of spirit in the face of such a plight was sometimes unbearable for the film crew, who were greeted warmly by the children’s families and grew close to them. 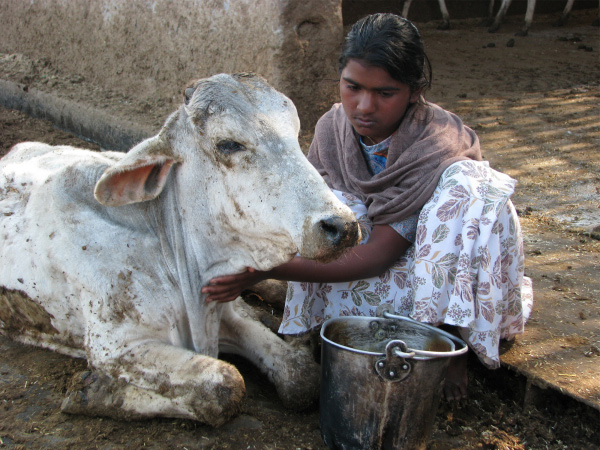 Bhagavati with one of her dying cows.

“Sometimes we couldn’t continue with the interview because we were just choking up,” Krishna-lila says. “We had to stop filming.”

Fortunately, the film isn’t just about tragedy and indomitable spirit, but the change that such spirit is already bringing about.

Hindus, Muslims, Sikhs, atheists, the young and old, farmers, business people, and environmentalists are all putting aside their differences and working together to restore the Yamuna. Brijbasis who never set foot ouside of Braj are breaking their vows to march for the Yamuna. And children like Jyoti and Bhagavati have also marched to Delhi in a major protest that ran from March 1st to 11th. What’s more, the protest has yielded a major victory.

“The government promised to build a sewage canal parallel to the Yamuna, so that no sewage will be discharged into the Yamuna river bed anymore,” Krishna-lila says. 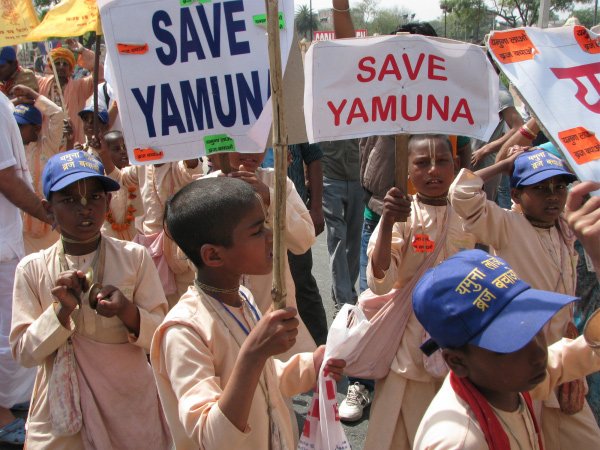 There’s still a lot more work to be done, however. The government has requested two years to build the multi-million dollar canal, and according to Save The Yamuna campaigners will have to be reminded constantly to stick to their deadline.

Meanwhile 97% of the Yamuna is still being diverted in Haryana, and protestors will have to continue fighting to have it released.

Krishna-lila hopes that her film will touch the hearts of not only devotees, or people in India, but also Western viewers amongst the general public—and inspire them to raise awareness of the issue.

While some may think it’s a faraway problem they have nothing to do with it, she warns that due to globalization, we are all connected.

“The State of Haryana, we discovered, is diverting Yamuna water to cultivate rice, which is then exported and sold in stores in the Western world to you and me,” she says. “So by being consumers, we’re generating a need, and thus we are also part of the problem.”

Krishna-lila hopes to release Rescuing the Stolen River this fall. The film will be screened at universities and film festivals in the US, made available for television, and may even be shown at the United Nations. It will also be dubbed in Hindi and screened in Delhi as well as at other venues in India, to further inspire the country’s government into taking action.

“We are making this film to serve the holy people and the dham, but most importantly, to give voice to the voiceless,” Krishna-lila says.

Rescuing the Stolen River is currently being edited, but with Krishna-lila already having poured her personal savings into the film, several thousand dollars are still needed to complete it. To help the children of the Yamuna have their voices heard, please visit http://www.stolenriverfilm.com and donate by Paypal or credit card at the bottom of the page.