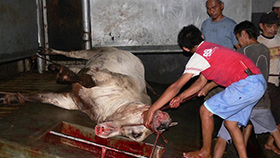 The Centre's Pink Revolution to promote meat production and export has led to a 44% increase in meat consumption and export in four years, but it has failed to regulate the industry.

According to data compiled by the animal husbandry departments of all states, meat from registered slaughterhouses increased from 5.57 lakh tonnes in 2008 to 8.05 lakh tonnes in 2011. Export earnings from bovine (beef and cattle) meat expected to touch Rs 18,000 crore in 2012-2013. India became the world's top exporter of beef in 2012.

Uttar Pradesh is the top buffalo meat-producing state with 3 lakh tonnes in 2011. At least 70% of the buffalo meat is exported. "Our meat is lean and cheaper. We supply halal meat, which is preferred in Gulf countries," said Surendra Kumar Ranjan, director of Uttar Pradesh-based Hind Agro Industries.

Though meat meeting international standards reaches markets in the Europe, the Gulf and South-East Asia, most of the meat sold in India is substandard. The best quality meat is sent abroad while B-grade meat reaches the domestic market.

Further, activists say the way animals are transported and slaughtered is cruel and far from international standards. "There is rampant abuse of animals in transport and slaughter of meat whether for domestic consumption or export," said Arpan Sharma, CEO of Federation of Indian Animal Protection Organisations.