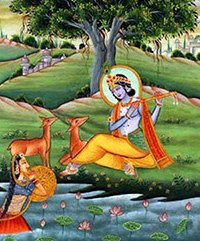 Starting March, 1st more than 100,000 brajavasis, devotees, farmers and people of various organizations marched from Vrindavan to Delhi to stop the abuse of the Yamuna river. On March 13th the march was called off but the protest continues.

This Pada Yatra was a turning point of the popular Save Yamuna Campaign.

The Yatra of several thousands that began on a firm note saw several ups and downs in the 13 days it marched and camped between Vrindavan & Delhi. Public participation and perception varied from time to time and place to place. However, the spiritual motivation kept both the participants and organizers going.

Everyone beaed bravely the onslaught of bitter cold winds, the sleeping on the highways, the abrupt unseasonal rainfalls and the lack of homely sanitations.

However, it paid off in a big although not fully.

The Indian government after much diplomacy and negotiations agreed to the second important demand of building a parallel channel alongside River Yamuna in New Delhi. This shall take away almost 70% of the pollution load from entering into the river bed. This huge, several hundred million dollar project is setting up a precedent throughout the country and is being hailed by environmentalists.

Sadly, the primary demand of allowing a minimum ecological flow of natural river water throughout the stretch of River Yamuna was turned down. The authorities have agreed to a small release of an extra 125 cusecs of fresh waters to the main course flowing down to Mathura – Vrindavan. This is simply way below what is needed to maintain the ecological flow of the river. The Government has prepared a package both long & short term to obtain the much needed eco flow. However, it will be years before this takes shape.

One of the biggest achievements of the Pad Yatra of Save Yamuna Campaign has been mass awareness & concern. There was massive media coverage both print & digital. The last 5 days saw every television news channel devote prime time to the Yatra and Yamuna issues. The fact that there exists No Original Yamuna Water in Vraj Vrindavan came to highlight. The main opposition party leader spoke very strongly about it in the Indian Parliament and this made news everywhere. She came out in total support of the Yatra in the Parliament & National Media. The Yamuna issue turned into common household’s talking point.

The Save Yamuna Campaign shall continue until the River gets its due. Every river deserves a basic ecological flow of natural waters throughout its stretch.

Amazingly, this is what the Indian Law also says. The Indian Government, if it wants, can issue a legal notification under the Environment Protection Act of India which binds every state to ensure that the river flows with natural waters.

Alas, the 1375 km long River Yamuna is still being robbed of all its waters only 200 kms after its birth.
Although the Yamuna Yatra attained great sucess in regards to one of their demands – the construction of a sewage canal to stop the discharge of pollutants, effluents and sewer waste into the river by drains of Delhi, yet their second demand concerning the release of original Yamuna water from Hathini Kund Barrage into the riverbed to secure a natural riverflow as well as "Bring Yamuna Back to Braj", which was the main motto of the protesters, was not sufficently met — thus civil movement continues on until all their demands are fullfilled.

The Save Yamuna Team has scheduled its next protest march starting on the 31st of March, 2014.