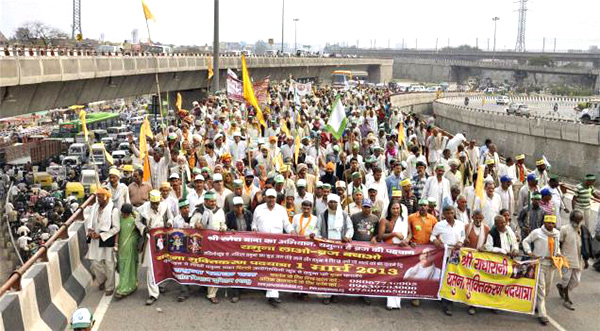 NEW DELHI: The Yamuna Protest March continued to camp in Delhi after the government didn't accept all their demands. Yamuna Rakshak Dal members were in a meeting with water resources ministry officials till late Wednesday night and are expecting an outcome by midnight.

"Of our two demands, the one for constructing a parallel drain along the Yamuna in Delhi to trap the entire sewage has been accepted. We also asked the government to release 50% of the river's original flow at Hathnikund and have it continue till Allahabad. So far, the government has assured of a 5% release at that point. Additionally, some flow from the Ganga Canal and some from another canal running between Hathnikund and Haryana will be added to the river. We are stuck over this point," said Dal members.

On Wednesday, minister for water resources Harish Rawat was expected to address the gathering at Aali Village. However, the meeting remained inconclusive and the protesters were expected to remain at the camping ground till at least Thursday.