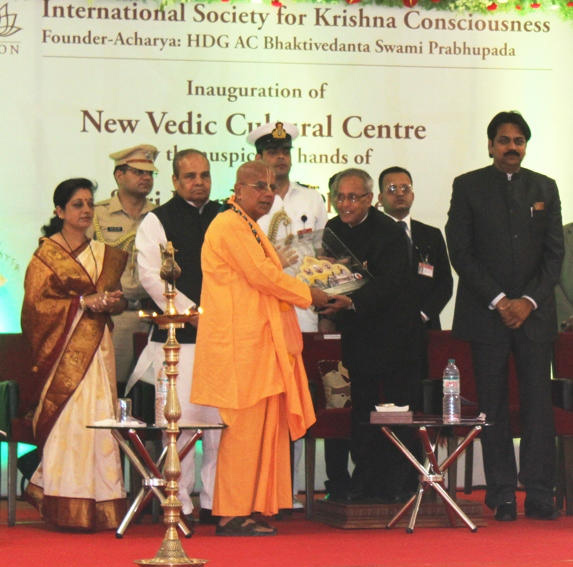 President of India, Shri Pranab Mukherjee praised Srila Prabhupada’s vision to propagate spiritual knowledge to society to achieve real unity and peace, at the inauguration of ISKCON’s New Vedic Cultural Centre in Pune on 24th February. Praising ISKCON’s remarkable network that included educational institutions and centers for scientific enquiry, he said, “Centers such as these are invaluable assets for developing India’s social infrastructure – just as the education that they impart helps break the vicious cycle of poverty and underdevelopment. The spiritual awareness such centers propagate are the life-sustaining nourishment for our souls.”

Several national and local political leaders, business persons, community spokespersons, academics and celebrities and thousands of congregation members and families are also expected to take part in the festivities.

Delivering his key-note address, the President further said, “Swami Prabhupada’s greatest legacy was that he was an exemplary ambassador of India’s timeless values. In the years that he spent spreading his simple message, Swami Prabhupada convinced hundreds of thousands of Indians and westerners about the profound value of his philosophy which they embraced along with a Vedic lifestyle. Throughout his mission, Swami Prabhupada remained faithful to the guidance of Sri Chaitanya Mahaprabhu, who had revitalized the Bhakti-yoga tradition in the 15th Century.”

The event began with the lighting of a lamp, during which a verse from the Chaitanya Charitamrita was chanted ‘krsna surya sama maya haya andhakar; jaha krishna tahar nahi mayar adhikar’.

Gopal Krishna Goswami then welcomed the President by saying, “Culture, by its nature, is all about refining the individual. But Vedic culture goes a step beyond refinement. It actually transforms our hearts and minds by awakening us to higher levels of consciousness. This results in improving the character and moral values of every individual. Reforming the character of people is the urgent need of society today. Therefore even though this culture of India may be ancient, it is still very relevant to the modern world. The New Vedic cultural Centre will cater to the needs of all age groups from every background, and to students from all over the world.”

Radhanath Swami recalled a story about Srila Prabhupada when he was vising London where a journalist asked him why he had come there. Radhanatha Swami referred to Srila Prabhupada’s reply: “The British ruled India for over two centuries. They took so much of the wealth of India. But they forgot its greatest wealth. They forgot to take our culture. And I have come to you to bring to you what you have forgotten to take. Our culture is based on essential universal principles that apply to all people at all times in all places. It awakens two things in our spiritual hearts: unconditional love of God and true and heartfelt compassion for all beings.”

The President was then escorted to the main temple where he offered flowers to Srila Prabhupada at his Vyasasana and offered arati to Sri Sri Radha Vrindavanchandra, Sri Sri Jagannatha Baladev Subhadra Sudarshan, and Sri Sri Gaura Nitai.

After this, the President had a private lunch with Gopal Krishna Goswami and Radhanath Swami and twenty other guests.

A day before the formal inauguration, thousands of devotees worldwide had thronged the temple to witness the installation and abhisheka ceremonies of Their Lordships.

“The focus of the Center is to inform and educate people about the glorious culture of India from the Vedic times, and to train them on how it can be applied to modern lives,” said Gopal Krishna Goswami. “The Center will help people of all ages and backgrounds to come together and perform work in a regulated manner called sadhana so that it transforms into divine service or seva that will build the foundations of a peaceful existence dedicated to achieving the highest goals of life.“

“The NVCC project is meant for all audiences and age-groups,” commented Radheshyam Das, President of ISKCON Pune. “We have designed special activities, training and educational courses, community development programmes, cultural awareness sessions and many welfare projects. These activities focusing on all-round spiritual, social and intellectual development of individuals will reach out to children, youth, women, senior citizens, professionals, corporate houses and other audiences.” 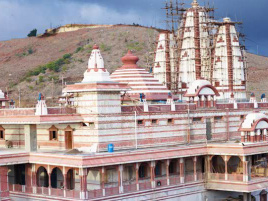 In the next phase of development, the NVCC project will house a large 250 seater Govinda’s bhojanalaya, a 50-room guest house for visiting pilgrims, and a Vrindavan garden. The specially landscaped garden will have replicas of the seven main temples of Vrindavan, the holy ponds of Radha Kund and Shyam Kund and the sacred Govardhan mountain where guests will be transported into a tranquil atmosphere of serenity and peace.

“One of the most redeeming features of this project is that it was supported by 40,000 middle-income group families who gave small amounts of donations, thus involving entire communities across Pune,” explained Srigurucharan Das, Project Director at the NVCC. “Apart from skilled craftsmen and workers, we had thousands of devotees and congregation members who have worked relentlessly to create probably the best looking temple and cultural centre in the city. ”