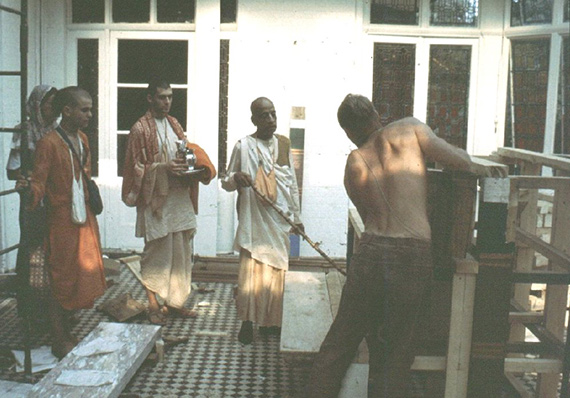 Srila Prabhupada guides his disciples as the first altar is built at the Bhaktivedanta Manor.

The late Beatle George Harrison, who was deeply impressed by Srila Prabhupada, was concerned that the ISKCON temple in Bury Place near the British Museum was overcrowded. With overwhelming generosity he offered to donate a much larger property ‘somewhere in the countryside but within easy travelling distance from London’.

From May 1972 he worked with the devotees to find somewhere suitable. In January 1973 Dhananjaya das saw that the Manor estate was up for sale and told George he had found exactly what he was looking for. George gave the go ahead and that day a hugely significant event occurred in ISKCON’s history.
After the exchange of contracts, 25 enthusiastic devotees moved in and renamed the estate Bhaktivedanta Manor. Almost immediately they turned their attention to the task of preparing to install the deities of Sri Sri Radha Gokulananda in time for Janmashtami.

And so, on Janmashtami, August 21st 1973 in front of devotees from across Europe, Hindu leaders, pop stars and local VIPs, Srila Prabhupada personally installed Sri Sri Radha Gokulananda at Bhaktivedanta Manor. A great Temple was established, with a devotional legacy now spanning 40 years.

Before we embark on a momentous year of celebrations to mark these 40 years we would like to say that we are honoured and humbled by all the wonderful service that so many devotees have given.
‘40 years of devotion’ at Bhaktivedanta Manor will begin with a grand Adi Vaas Puja on Sunday 24th March this year – on this day we will be celebrating Gaura Purnima and Holi at our first public festival of the year.