On February 16th, two days after Valentine’s Day, between fifty and one-hundred-and-fifty Londoners will gather to celebrate the loving holiday in a unique way.

Entitled “Love Your Soul,” the event will be held in Covent Garden’s beautiful Swiss Church, a sacred space built in the 1850s.

It will feature a six-hour kirtan—the ancient Indian practice of call and response chanting—from 3pm until 9pm. Leading the chanting will be local “kirtaniyas” Jahnavi, Amala Harinam, Nadiya Mani, and Gopi Bhava. They’ll be joined by senior ISKCON devotee Ranchor Prime, who is becoming well-known in the London yoga community for his Bhagavad-gita classes, and has just released a new book called “The Birth of Kirtan.” 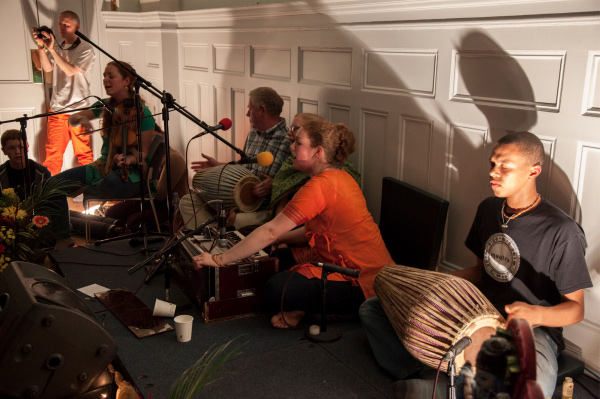 The event is under the umbrella of Kirtan London, a recently established organization that is attempting to create a London-wide community of kirtan lovers, and to make the ancient practice of calling out to God accessible and relevant to the general public.

“We want to give the message that kirtan is the ultimate expression of love, because the deepest love that one can express is that of the soul for the Divine,” says organizer Jahnavi Harrison. “And one of the deepest ways we can connect with others in relationship is to chant together.”

Like all of Kirtan London’s events, Love Your Soul will be an artistic presentation that entertains as well as inspires, and caters to newcomers.

The Kirtan singers will sit facing the crowd in a concert-style fashion, as this has been found to be the most familiar and comfortable for the public. They’ll introduce people to Sri Chaitanya Mahaprabhu, the 15th century founder of the Kirtan revolution, and the avatar of Prema, or love. And they’ll speak about the basic philosophy behind kirtan.

Then, each kirtan singer will sing for less than forty-five minutes, to create variety for newcomers. And they’ll each be introduced in an entertaining way by MCs Jahnavi Harrison and former Youtube celebrity Ben Loka, now Bala Nimai Das.

“We try and make it fun, so people laugh and feel comfortable,” Jahnavi says.

Meanwhile, a large screen behind the singers will show the words for the Hare Krishna mantra and other mantras, so the crowd can easily follow along. It will also show film footage which will accompany guided meditations throughout the evening. For instance, a camera may fly over mountains during a meditation about steadiness; or show lotus flowers in a lake during a rendition of the song Sri Gurvastakam, which describes “the lotus feet” of the guru.

Adding to the experience will be some South Indian Odissi dance, while sanctified vegetarian food will be served continuously for a two-hour period to keep people going.

It’s a structure that works. This February’s event will be Kirtan London’s second 6 Hour Kirtan, after a hugely successful debut in October of last year.

Each 6HK, which the organization is currently holding four times a year, is held in a beautiful location of spiritual significance. October’s was held at Bridewall Hall, next to St Bride’s, the oldest church in London, and drew an impressive 200 people. Not only that, but most of them stayed throughout the entire six-hour stretch.

“We presented it as a six-hour challenge, with a prize of traditional sweets for those who completed it,” says Jahnavi. “Almost everybody stayed! I was amazed!”

Of course, the 6 Hour Kirtan is just one of Kirtan London’s many creative efforts.

Jahnavi Harrison, who runs the project along with eight other devotees, gets inspiration for many of her ideas from her five years traveling in the US with Gaura Vani and other kirtan artists from the Mantralogy record label.

Seeing the kirtan revolution sprout from the ground up there, in the bhakti and yoga communities within ISKCON and beyond, Jahnavi felt sure that something similar could be done in the UK. She prayed to Sri Sri Radha Gokulananda, the presiding Deities of Bhaktivedanta Manor near London, to make it clear where They wanted her to be—the US or UK.

Just then, as she returned to the US for her annual kirtan tour in March 2012, she was not only deported by US authorities, who thought she was a conventional musician trying to make money and was working illegally—but she was banned from returning for five years.

The message was clear. By June, Jahnavi was part of a team of devotees from both London’s Soho St ISKCON center and Bhaktivedanta Manor, who were determined to develop a kirtan network.
On August 11th, 2012, Kirtan London was launched at an event in Fitzrovia, a trendy part of London’s West End. Influential persons in the London yoga community were invited, while Russell Brand, a famous actor and comedian, introduced a talk by spiritual teacher Radhanath Swami.

Since then, Kirtan London has focused on organizing three types of events. The first is the quarterly 6 Hour Kirtan. The second is Mantra Lounge, a monthly event which was already running for one year prior to Kirtan London, but which has seen attendance jump from ten to fifty since the organization became involved.

Mantra Lounge is held on the first Friday evening of every month in Neal’s Yard, an area of Covent Garden well-known for health food cafes and new age retailers. Each event features one-and-a-half hours of kirtan as well as some guided meditations, and draws a young, varied crowd.

“The mood is generally quite relaxed and peaceful,” says Jahnavi. “In December, we had a Christmas special where maybe sixty or seventy people crammed into the small space, and we did mantra carols and things like that. It was great fun.”

Finally, Kirtan London has also been organizing “Thirty-Minute Meditation” events at the School of Oriental and African Studies (SOAS). Introducing kirtan in bite-size nuggets, they begin with yogic breathing exercises, and include some guided meditation, an introduction to the mantra, twenty minutes of chanting, and a light prasadam snack.

Kirtan London also holds the occasional concert at different London Universities, inspired by the Sacred Sounds concerts put on by the Bhakti Club at Rutgers University in New Jersey, USA, which draw around 600 students. As there are already similar clubs in many major London universities, Jahnavi hopes to connect with these and put on bigger events in the future.

So far, although it’s only been running for six months, Kirtan London has already made its mark and is garnering very positive feedback. Newcomers have called its kirtans “A very immersive experience,” “uplifting,” and “liberating,” and have said about the project that they’ve “been looking for something like this for a long time.”

One participant commented, “[While you’re doing kirtan]You’re completely unaware of anything else that’s happening. It doesn’t matter how you’re singing, or what you look like. You just completely let go and be with the Divine.”

Devotees, meanwhile, are glad to see that while UK temples have connected very effectively with the Indian community, there is now more outreach towards UK residents that don’t have an Indian cultural background.

When summer comes around, Kirtan London will also hold “flash mob kirtans,” really just a trendy way to refer to Harinamas, the traditional public kirtans held by devotees. With a ‘come as you are’ vibe—Vaishnava dress won’t be mandatory—Jahnavi feels that the kirtans will draw more newcomers as well as second generation devotees and others who may otherwise feel conspicuous.

Further into the future, Kirtan London aims to present kirtans and meditation workshops in the corporate world, working with devotees who are already running events at companies like Ernst and Young and HSBC.

Jahnavi says the organization also wants to infiltrate London’s arts and music scenes, hit the summer music festival circuit, and even arrange major kirtan concerts at venues like the Royal Albert Hall.
It’s all part of the mission to make kirtan accessible and relevant to modern Londoners, and to create a city-wide community based around coming together to share kirtan.

“Our goal is to give people a taste for chanting,” Jahnavi says. “And through that, to open their hearts to hearing Krishna conscious philosophy, as they start to interact more with devotees and become friends with them. That’s what I saw happening in New York, and I hope to see it happen here, too.”