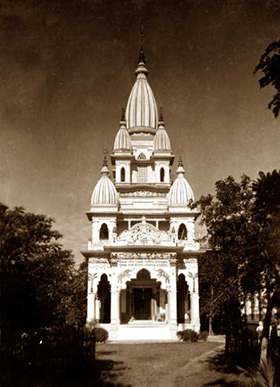 Question 1: Who should be staying in the maṭha (monastery)?

If all those who are only interested in eating and in sensual pleasure, but who have taken shelter of the facility of the maṭha, were asked to leave, one after the other, it would reduce the expenses for the maṭha and minimize other worldly troubles.

All those who do not follow the principles and ideals of the maṭha, who lack humility, and who are not inclined to follow the path of bhakti under the guidance of śrī guru, should be sent home in all their pride and insubordination. Even if this reduced the numbers of our ranks, it would still be good. Whoever does not engage in hari bhajana and instead spends their time hankering for acquisition, adoration and recognition, money, and the association of the opposite sex, should not be allowed to stay in the maṭha, for they are inwardly opposed to the very purpose of the maṭha.

“I have stayed in the maṭha for a long time. I have done so much for the maṭha. I shall therefore eat the best prasādam and wear the best cloth. I should certainly be instated in a leading position and I should be respected highly. Indeed, I am entitled to a prominent share of the ownership and management of the maṭha.”

These attitudes, which are against bhakti, should be nipped at the bud. Such disturbing thoughts arise when one remains engaged in doubting, criticizing and talking about others.

“I am expert at so many things,” “I am very intelligent,” “I am such a good speaker,” “I am a very good singer” – we should never allow ourselves to be overwhelmed by these thoughts, for they are opposed to bhakti. We should be humbler than a blade of grass. Someone may attack us or criticize us, but even then it is better to tolerate it and engage in chanting the holy names. At those times, we should think, “today, the Supreme Lord has mercifully provided me an opportunity to become humbler than a blade of grass.” When someone engages in directly reviling us, we should see that the Supreme Lord has arranged for us to attain our true welfare.

Question 2: Who does the maṭha have nothing to do with?

Answer: The maṭha can never have any connection with those who have taken shelter of it, outwardly agreeing to follow its principles, but who, shackled by their own duplicity, intend to misuse the transcendental knowledge they shall acquire there.

“I need a boat and a boatman to cross a river. So, too, do I presently need the assistance of a guru.” So many people have accepted me as their guru with no more than this consideration. They had not even seen me for a single day, nor had I associated with them even once, nor will I ever associate with them for the rest of my life. Such hypocrites had not previously displayed any duplicity, but because of making offences to the lotus feet of their guru and to the Vaiṣṇavas, they became deviated from the path of hari-bhakti and were again entrapped by worldly desires.

Question 3: Who does Śrī Bhagavān attract?

Answer: Śrī Kṛṣṇa, the son of Śrī Nanda, is Bhagavān Himself. That Śrī Kṛṣṇa attracts the entirety of creation. Śrī gurudeva is kṛṣṇa-preṣṭha, Śrī Kṛṣṇa’s most beloved, and He is the personification of Śrī Kṛṣṇa’s attracting potency. The only truly attractive entity is the truly and permanently existing one (vastava-vastu). Who does He attract? The magnet attracts iron but not wood. In the same way, our master, Śrī Bhagavān, only attracts His servant as well as one who even has the inclination to serve Him. The servant and those who are inclined to serve (sevonmukha) are attracted by the love, mercy and sweetness of the Master. That all-attractive being, through His inconceivable potency, tugs all the attracted beings along. If the attracted beings become distracted by some other object midway, or somewhere along the path, then they have deviated from the fundamental source of all attraction.

On one side we find attraction to the material world, which is the cause of bondage and simply leaves us in a state of deprivation, and on the other side we find attraction to Śrī Kṛṣṇa. The attractive things of this world – the sights, tastes, sounds, and sensations exist in very close proximity to us. Since we are weak, we become attracted by them. Therefore, we should hear hari-kathā from a living source – that is, a powerful saintly person. {quotes}We shall only be protected from that foe of ours, which lives so close to us, if we continually hear hari-kathā from saints and śrī guru. If we do not fall under the sway of attraction to Śrī Kṛṣṇa, we are bound to be attracted by māyā, His potency of illusion.

Question 4: Who are the tarka-panthī (adherents to the path of speculative reason and argument)?

Answer: As long as one follows the path of argumentative speculation and reason, or tarka-panthā, one remains unable to receive the audience of śrī guru. A truth separate from the words of Śrīla Gurudeva can never exist. The path of tarka is that path in which one pursues the doubts and conflicting thoughts that arise in order to test the authenticity of that single truth. It is nothing more. The adherent of this path disobeys śrī gurudeva. Only śrī gurudeva is capable of clearing all of our doubts and refuting all opposing opinions. An argument based in reason alone cannot be permanently established. The truths that manifest when knowledge is transferred via hearing scriptural revelation – which is the purest path – are unalterable. One who bestows such unchangeable truth is known as śrī gurudeva. The reasoning present in the argumentative consciousness of one who is rebellious toward śrī guru represents disobedience to śrī guru and scripture.

When we invoke the methodology of argumentative reason in our interactions with śrī guru, when we try to measure śrī guru through the filters of knowledge we have acquired with our material senses, when we do not follow in his footsteps but imitate him instead, then we inevitably meet with inauspiciousness or even spiritual annihilation. Only when we completely discard such depravity upon surrendering to the lotus feet of śrī gurudeva, shall we achieve spiritual welfare.

Wealth, knowledge, skill, intelligence and bravado are not the goal of life for a devotee of the Lord, for, by these, we end up committing the offence of disobeying śrī guru and the Vaiṣṇavas, and then, as a result, we are deprived of service to śrī guru and Śrī Kṛṣṇa.

Question 5: Should one make a special effort to associate with Vaiṣṇavas [dedicated servants of śrī guru]?

Answer: Definitely. Association of śrī guru and those Vaiṣṇavas who are resolutely dedicated to śrī guru (who have guru-niṣṭha) is specifically beneficial. If I, who am so unqualified, do not associate with the Vaiṣṇavas, how will I learn Vaiṣṇava etiquette, how to serve Śrīla Gurudeva, and so on? We always require an ideal role-model in front of us. Without the association of a Vaiṣṇava who has resolute dedication to guru (guru-niṣṭhā), resolute dedication to nāma (nāma-niṣṭhā) and resolute dedication to sevā (sevā-niṣṭhā), we can never attain resolute dedication to guru ourselves, nor a feeling of divine possessiveness toward śrī guru, nor the feeling of awe and reverence for śrī guru like that which we feel for the Supreme Lord, nor the inclination to serve śrī guru. If the selfless guru-niṣṭhā-vaiṣṇava who already has resolute dedication for śrī guru does not teach me how to render service to śrī guru and how to behave with śrī guru, then even upon attaining the shelter of sad-guru, a true spiritual master, I shall be bereft of service to him, as if losing a precious jewel I have only just found.