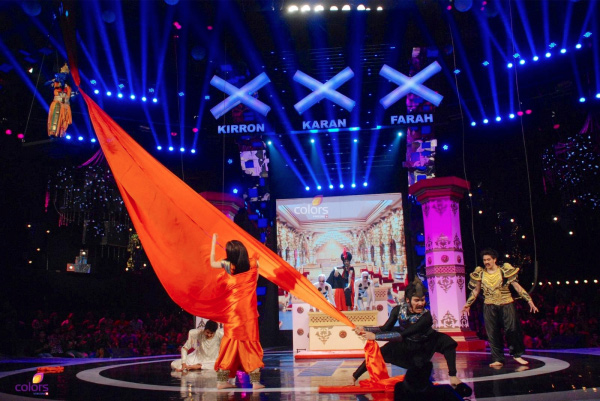 Her dance company Natya Nectar follows in the footsteps of devotee rock group “Madhava’s,” who sang Hare Krishna and verses from the Bhagavad-gita to great acclaim on Season 3.

Bursting ahead of the hundreds of thousands who audition, Natya Nectar reached the semi-finals, giving the already successful group a powerful springboard for presenting Krishna conscious entertainment to the masses.

Doing this through dance is something Goura Prema has been focused on since the very beginning of her life. Growing up at the New Dwarka ISKCON community in Los Angeles, she says her mother, Gurukula teacher Mahadevi Dasi, swears she would do dance mudras (sacred hand symbols) in her sleep at age three.

At five, she already knew she wanted to be a dancer, and studied traditional Bharat Natyam dance at BG Prakash’s Shakti School of Dance. She continued studying various forms of dance, including ballet, jazz, and hip-hop, throughout her childhood and early teens.

Then, at the age of sixteen, she and her sister Chaitanya Nitai landed small roles in American Blend, a low budget Bollywood movie filming in LA and featuring renowned actor Anupam Kher. After receiving free training on the set in Kathak, the North Indian devotional dance form, Goura Prema decided she wanted to pursue it more seriously.

In 2003, at the age of 21, she finally made her way to India to find a Kathak guru. After auditioning, she was accepted into the Sri Ram Bharatiya Kala Kendra (SBKK), one of Delhi’s oldest and most renowned schools for classical music and dance.