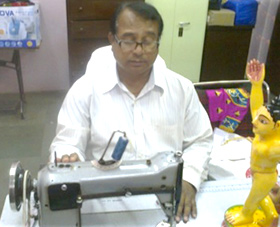 I took this interview of Sriman Abdul Rashid– the 63-year-old designer who is the man behind the beautiful clothes and decorations of the deities of Lord Krishna and His beloved Srimati Radha at the ISKCON temple in Juhu, on the afternoon of 5th December 2012 in his room no. 162 on the first floor of Mumbai ISKCON temple (Shri Radha Ras Bihari ji). I read about him in a local newspaper and was so surprised to know that he would do such wonderful devotional service in spite of being from such a different faith and background.

My idea behind writing this article is to motivate devotees to take up this loving service of dress-making for the deities and not just buy 'readymade' deity dresses from market made by professionals and businessman. Also, this will motivate people from other religions to take up devotional service.

Sriman Abdul Rashid, a resident of Jogeshwari, is one of the best examples of how talent can be used expertly in Krishna's service. Abdul Rashid has been steady in his service of dress-making complete with gold embroidery, floral designs and heavy zardosi work for the great deities of Shri Radha Ras Bihari, Shri Gaura-Nitai and Shri Sita-Ram-Laxman-Hanuman located at Juhu in Mumbai, India for the last 35 years. He works with the deity department which looks after the jewellery, flowers, garlands and clothes of the 10 deities in the temple.

Way back in 1970s Abdul Rashid had a small tailor-shop outside the Sri Sri Radha Rasa Bihari temple, and while stitching clothes for men and women at his suburban tailor shop, he used to make few dresses for deities at Iskcon, Juhu. His innovative and colorful dresses completely metamorphosed the temple surroundings and became very popular with visitors.

Abdul Rashid– "I began designing the clothes for the deities at the ISKCON temple after I moved from Balia, Uttar Pradesh back in 1966. Initially, when I moved here, I took up various jobs such as painting, plumbing. Finally, in 1976, I joined a stitching class and that's when I realised I had found my passion in life, I got the first break in my life when a disciple of Srila Prabhupada loved my designs and asked me to work at the temple for the next 15 days. When I came here in 1976, Srila Prabhupada was ill. I was introduced to Srila Prabhupada by a devotee named His Grace Puri das Prabhu. Srila Prabhupada told me that he liked my work very much, so I should not go anywhere other than the temple. I was called to the temple and I stayed there for two weeks," he says that his 15 days at the temple changed his life completely, "During my initial days, I met Swami Prabhupada, who told me to stay back at the temple and continue to design clothes for the deities. He said that this was my life's calling and ever since then I have never looked back."

He continues, "One foreign devotee mataji named— Her Grace Vishva Devi dasi, a disciple of Srila Prabhupada got me into the temple initially and supported me a lot. At the time when I came to the temple, there were just 5% Indian devotees and the remaining were foreigners. Devotees in the temple treated me as their family member and since then I lost my heart in the temple. I had no knowledge about the deities and used to stitch clothes 'outside' the temple. I would stitch during the day-time and in the evening while being at the Juhu beach, I used to think—'how will I make a pant for Krishna?' 'Gaura-Nitai's hands are stretched, how will I make a dress for Him?' I used to think of making dresses for Krishna 24 hours a day. His Grace Narottam Prabhu (an American disciple of Srila Prabhupada) was the head pujari at that time and supported me a lot just like Her Grace Vishva Devi dasi mataji did. I have been doing my seva since then and never faced problems of any sort. It has been 35 years now and it is the time for retirement now (laughs)."

His Holiness Giriraj Maharaj once told Abdul that he does not need to take diksha (initiation) and wear 'kanthi mala', as he was serving Krishna directly. (Abdul told me this when I asked him thrice that why was he not wearing kanthi mala.)

In 1985-1986 Abdul was so absorbed in his devotional service that one night in his dream he saw that he was in the holy dham Vrindavan where Shri Radha Krishna sat on a swing in a garden, and they blessed Abdul. Abdul did not disclose this dream to anyone thinking that people would laugh at him.

"I am involved in all stages of dress designing, right from selecting fabric, colour selection till the final embroidery. I do not repeat any designs. I put figures of parrots, cows, bells, trees just about anything which comes into mind. Though I have no formal training in making clothes, innovative designs just churn out from my heart. I feel it is all God gifted", adds Abdul.

He explains about dresses—It takes three months to make one dress, dresses are made of 'pure silk' and 'raw silk', expenditure on Janmashtami dress is about Rs. 5.50 lakhs (this includes dresses for all the three altars of Shri Radha Rasa Bihari , Shri Gaur-Nitai and Shri Sita-Ram-Laxman-Hanuman). Gaura-poornima and Ram-navami dresses costs Rs. 2.50 lakhs, the night-dress (wore by the deities at 9 PM and seen in mangala-arti) costs Rs. 1.50 lakhs.

Work on the Janmashtami dress begins six months in advance, when the colour and pattern is decided, after which he begins stitching the dress for the presiding deity, Sri Sri Radha Rasa Bihari. Speaking of the adornments, Rashid has changed the dress designs for Holi. "Lord Krishna, Srimati Radha and all the other deities at the temple will be dressed in a pink outfit for Ranga-panchami. The outfits for all the deities are made up of pure silk and have silver zari work with gems embedded in them."

Till date in his 35 years career, he has stitched over 1000 dresses including some dresses which adorn Iskcon temples in America, Australia and other countries.

Some people donate to the temple for dressing deities on holi, Janmashtami, Ram-navami etc. Some people donate money for clothes and some for embroidery. When the dress gets old, it is burnt and never sold as people may contaminate it, but some temples even sell the dresses worn by the deities. One dress lasts for 10-15 years. Shri Radha Rasa Bihari have around 150 dresses in all. 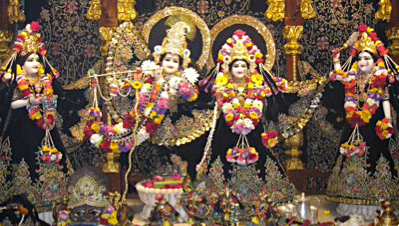 Abdul's favorite dress is a 'black and golden dress' which is 30 years old and are worn by the deities on Saturday. Earlier many matajis used to go to Abdul to assist him in making dresses, but no one goes to assist him now. One will fail to find a dress like ISKCON anywhere and ISKCON Mumbai (Juhu) is famous worldwide.

In 1992 there were Hindu- Muslim riots in Mumbai; His Holiness Gopal Krishna Goswami Maharaj asked Abdul if he wanted to live in temple guest house for safety. Maharaj told the guest house manager to give Abdul a room in the guest house whenever he needed. Speaking on frequent clashes between Hindu and Muslim communities in the country, he opines, "I think it is uneducated people who create rifts in Hindu and Muslim communities for selfish motives. Otherwise its Allah or God, both shower their love on mankind. I have never given it a thought that I am a Muslim stitching clothes for Hindu Gods. Even the authorities and visitors have always treated me as part of a big family. Even I educate my kids to know the importance of communal harmony and mutual peace." Rashid believes that his religion is of no significance to his work.

In India, religion dominates people's lives to a great extent that at times it dictates people's professions too. However, devotional service unto the Supreme Personality of Godhead is not constrained by the boundaries of religion. Abdul Rashid is such an example. His home is an amalgamation of Upwaas and Rojas as even posters of Lord Krishna adorn his home walls.

He said, "God, the source of energy in this world, is one. He only has different manifestations — be it Allah or Bhagwan." He added, "Ever since, I began working at ISKCON, which is was 36 years ago, I have been a vegetarian."

Rashid's colourful and magnificent designs not only grace the deities in India but also in the ISKCON temples in America, UK and Australia. His designs have also been showered with praise from devotees all over the world. Mukund Madhav Das said, "Rashid's designs are appreciated by all the visitors at the temple. The evidence of his exemplary work is that he has continued as the main dress designer at the temple for so many years now." When asked about the adulation heaped on him, a modest Rashid simply said, "I am glad that devotees at the temple love my work and when people appreciate my designs, I feel very proud to be associated with Lord in some way or other."

Abdul tells about himself and his family—"I was born at Balia near Benares in Uttar Pradesh. I came from Balia to Mumbai in 1968. My father is 90 years old now, he was living in Mumbai but has been taken to Balia recently. My mother is 75 and lives in Balia as well. I have three sons, two are married and one is pursuing hotel management course (final year)."

His Grace Hari Das Prabhu (a disciple of Srila Prabhupada and director of ISKCON Television) wants to make a film on life of Abdul and wants him to write for that film, but Abdul modestly says that he has no time for that.

In those days, Sriman Abdul further recalls, Mumbai's population was just one-fourth of what it is now, there were no buildings and roads were vacant. There was nothing in Juhu hardly anyone would come to Juhu. One BHK (Bedroom Hall Kitchen) used to cost Rs. 80,000 in 1979-80 (even after temple was constructed). Now it is nothing less than Rs. 1.5 crores. No one had money in those days and wheat was cheap. In 1968 we used to have a meal was Rs. 1.25. At that time temple gave him Rs.5000 to get a chawl at Parle (temple always helped him a lot) as there were no buildings. Abdul still has a shop outside temple but he has given it on rent as he does not like that time many American devotees wanted to take him to USA; but Srila Prabhupada's instructions for Abdul to be always in the temple makes him stay at Shri Radha Rasa Bihari forever.

Abdul is 63 years old now, with fragrant agarbattis and echoes of Hare Rama Hare Krishna mantras echoing in his ears, he continues to be sincerely engrossed in his temple workshop creating new dresses and desires to serve Sri Radha Rasa Bihari as much as possible. As I am taking Abdul's interview (in Hindi), he is making a saffron dress for a small deity of His Divine Grace A.C. Bhaktivedanta Swami Prabhupada.