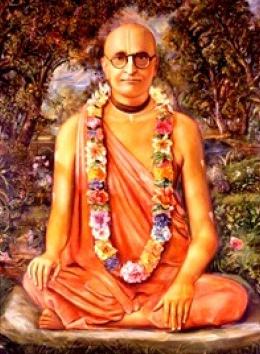 The Disappearance of Srila Bhaktisiddhanta Saraswati Thakur Prabhupad is observed on December 31st.

We have taken upon ourselves the responsibility of welcoming this grave charge. All the audience have accepted ordinary seats, I alone have been provided with a lofty seat. All are being told in effect – "Do have a look at a big animal from the Zoo-gardens. What arrogance! So foolish! So wicked! Have you ever seen such a big brute? Garlands of flowers have been put round his neck! What laudations! What bombastic long-drawn, and hyperbolic adjectives! And how complacently too he is listening to the praise of his own achievements, how intently, and with his own ears! He also evidently feels delighted in mind! Is he not acting in plain violation of the teaching of Mahaprabhu? Can such a big brute, so selfish and insolent, be ever reclaimed from brutishness? "

I happen to be one of the greatest of fools. No one offers me good advice on account of my arrogance. {quotes}Inasmuch as nobody condescends to instruct me I placed my case before Mahaprabhu Himself. The thought occurred to me that I would make over the charge of myself to Him and see what He would advise me to do. Then Shri Chaitanyadeva said to me:

"Whom-so-ever thou meet'st, instruct him regarding Krishna, By My command being Guru deliver this land; In this thou wilt not be obstructed by the current of the world; Thou wilt have My company once again at this place."

In these verses is to be found the proper explanation of the apparent inconsistency noticed above.

He whose only teaching is humility greater than that of a blade of grass, said- "By My command being Guru save this land!" – In this instance Mahaprabhu Himself has given the command. His command being "Perform the duty of the Guru, even as I do it Myself. Also convey this command to whom-so-ever you chance to meet." Chaitanyadeva says, "Tell them these very words, viz. By My command being Guru save this land Deliver the people from their foolishness." Now who-so-ever happens to hear these words would naturally protest with palms joined – "But I am really a great sinner, how can I be Guru? You are Godhead Himself, the Teacher of the world. You can be Guru." To this Mahaprabhu replies:

"Do not practice the craft of a Guru for the purpose of injuring others through malice. Do not adopt the trade of a Guru in order to get immersed in the slough of this world. But if you can, indeed, be My guileless servant you will be endowed with My power–then you need not fear.

I have no fear. My Gurudeva has heard this from his Gurudeva. And it is for this reason that my Gurudeva has accepted even such a great sinner as myself and has told me. "By My command being Guru save this land." It is only those who have never heard these words of Gaursundar who say "How odd! to listen to one's own praise!" While the Guru is instructing his disciple in the eleventh Skandha of the Bhagavatam what a great sin, in their opinion, is he not perpetuating! What is the Acharya to do when he has to explain the Shloka Acharya Mam Vijaniyat: "Never disregard the Acharya; never entertain the idea that the Acharya is your equal in any sense." These are the words of Shri Krishna Himself by which the jiva is to be benefited. Is the Guru to take himself off, to desert his seat–the seat of the Acharya–from which these words are to be explained? That office his Gurudeva has conferred on him. If he does not act up to its requirements he is doomed to perdition by reason of his offense against the holy Name in the shape of disrespect towards the Guru. He has to do it in spite of the fact that such procedure is apparently open to the charge of egoism. When the Guru imparts the mantram to the disciple should he not tell him by this mantram to worship the Guru? Should he say instead, "Give the Guru a few strokes of the shoe or the horse-whip?" The Guru is never to be decried. The Guru is the abode of all the gods. Should the Gurudeva abstain from communicating these words to his disciple while reading the Bhagavatam to him? "To him alone who possesses guileless spiritual devotion, similar to the transcendental devotion that is due to Krishna Himself, to the Gurudeva, the holy mysteries are manifested." Is the Gurudeva not to tell these things to his disciples? "Athau Gurupuja: the worship of the Guru has precedence over all others." The Guru is to be served just as Krishna is served. The Guru is to be worshiped in a particular way. Is the Guru to desert his seat without telling all these things to the disciple? In the angle there is always the defect in the shape of absence of the fullness, the evenness of level, of 180 degrees or of 360 degrees. But in the plain surface, in 360 degrees, there is no such defect. That in the emancipated state no defect is possible, this simple truth ordinary foolish people entirely fail to grasp.

As the saying goes, "having started on the dance it is no use to draw close the veil." I am doing the duty of the Guru, but if I preach that no one should shout "Jai" to me, that is to say, if I say in a round about way, "sing Jai to me," it would be nothing short of duplicity. Our Gurudeva has not taught us such insincerity. Mahaprabhu has not taught such insincerity. I have to serve God in the straightforward way. The word of God has come down to the Gurudeva; I have to obey it in all sincerity. I will not disrespect the Guru at the instance of any foolish or malicious sectarians. Especially as Shri Gurudeva has directed me saying, "By My command being Guru save this land." This command has my Gurudeva preached. My Gurudeva in his turn has conveyed the command to me. I will not be guilty of any insincerity in carrying out that command. In this matter I will not accept the ideal of ignorant, insincere, pseudo-ascetic sectarianism. I will not learn insincerity. The worldly-minded, the malicious, the pseudo- renunciationists, the selfish cannot understand how the devotees of God, spurning at everything of this world by command of God, never, not even for a second, deviate from the service of God through all the twenty-four hours.

{quotes}Hypocritical sectarians, pseudo-Vaishnava sects, those sects that cherish internally the longing for earthly fame, naturally enough think: what a shame it is for one to listen to the eulogies of disciples occupying the seat of the Guru. But every Vaishnava regards everyone of the Vaishnavas as the object of his veneration. When Thakur Haridas exhibits the attitude of humility Mahaprabhu says – "You are the greatest of the world, the crestjewel of the world. Be agreeable, let us have our meal together." He carried in His arms the body of Thakur Haridas which is eternally existent, self-conscious and full of spiritual bliss. In the community that follows Srila Rupa, the qualities of desiring no honor for oneself and of readiness to duly honor others are fully present. Those who detect any disparity are, like the owl, blind while the sun shines. They commit an offense by such conduct.

If I disobey the law which has come down to me through the chain of preceptorial succession, the offense due to omission to carry out the command of the Guru will sever me from the lotus-feet of Shri Gurudeva. If in order to carry out the command of the Vaishnava Guru I have to be arrogant, to be brutish, to suffer eternal perdition, I am prepared to welcome such eternal damnation and even sign a pact to that effect. I will not listen to the words of other malicious persons in lieu of the command of the Gurudeva. I will dissipate with indomitable courage and conviction the currents of thought of all the rest of the world, relying on the strength derived from the lotus feet of Shri Gurudeva. I confess to this arrogance. By sprinkling a particle of the pollen of the lotus-feet of my Preceptor crores of people like you will be saved. There is no such learning in this world, no such sound reasoning in all the fourteen worlds, in no man-gods, that can weigh more than a solitary particle of the dust of the lotus-feet of my Gurudeva. Gurudeva in whom I have implicit trust can never spite me. I am by no means prepared to listen to the words of any one who wants to hurt me or to accept such a malicious person as my preceptor.