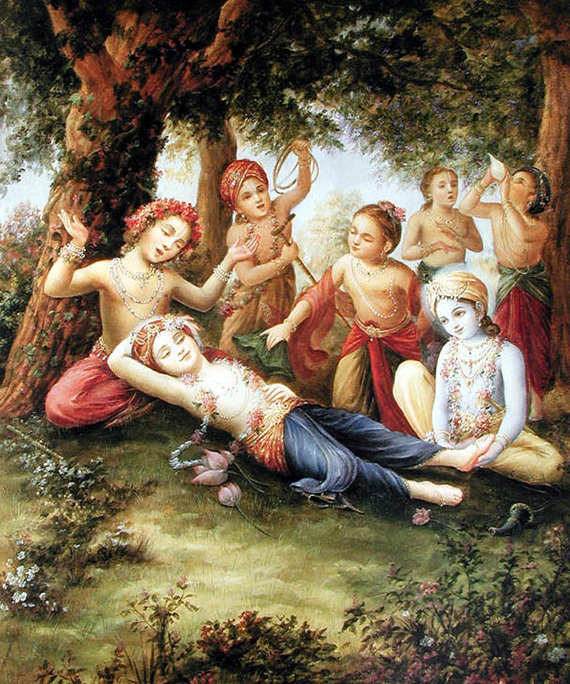 The Disappearance day of Sri Kaliya Krsnadasa is observed on December 10th.

Kaliya Krishna Das was known throughout the three worlds. One can attain Gauracandra through remembrance of him. (Chaitanya Bhagavat 3.5.740)

Lavanga Sakha is one of the twelve Gopals. His Shripata is in the town of Akai Hata, within the jurisdiction of Katwa just off the road which leads from Nabadwip to Katwa. It is about two miles south of the Katwa train station and one mile north of Dain Hata station. Near the Shripata is a tank called Nupur Kund. It is said that the ankle bell of Raghunandan Thakur, the son of the Khandavasi Mukunda, fell here. Others say that it was Nityananda Prabhu’s ankle bell.

In his Anubhashya commentary to the Chaitanya Charitamrita, Srila Bhaktisiddhanta Saraswati Goswami Thakur has written:

He had two sons named Sri Mohana Das and Sri Gauranga Das, or Vrindavan Das. Their descendants still live in the Sonatala village. There they celebrate Kala Krishna Das’s disappearance day on the twelfth day of the waning moon in the month of Agrahayan. The deity which he worshiped was named Kala Chand.

Kala Krishna Das was the best of the Vaishnavas. He knew nothing other than Nityananda Prabhu’s lotus feet. (Chaitanya Charitamrita 1.11.37)

When Jahnava Devi came to Katwa, Kala Krishna Das was in her entourage.

They all arrived in Kantaka Nagara (Katwa) with company of many devotees, including Kala Krishna Das from Akai Hata. (Bhakti-ratnakara 10.409)

The Kala Krishna Das who accompanied Sri Chaitanya Mahaprabhu to Southern India was not the same personality. (Anubhashya, 2.7.39)