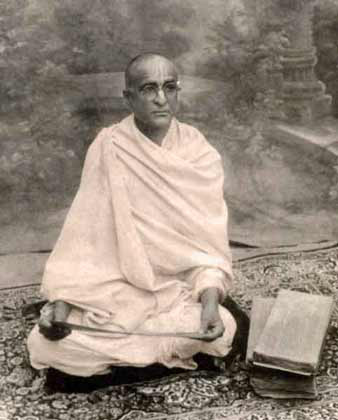 Question 1: What is the meaning of the word namaḥ in our mantras?

Answer: The word namaḥ means to renounce one’s pride, or independence, and bow down in heartfelt surrender. “O Gurudeva! O Kṛṣṇa! From today, I am Your servant and You are my only shelter. Please be merciful to me and guide me; engage me in Your service. From today onward I have renounced my pride and my ahaṅkāra – my false, egoistic conception that I am the active agent. My only prayer is that from now on Your instructions, and Your advice and direction be my only focus – the Pole Star and governing element of my life.”

As long as Śrīla Gurudeva, the beloved of Śrī Kṛṣṇa (kṛṣṇa-preṣṭha), is physically manifest, it is wise to render intimate service to him, and thereby attain perfection. But if we are not able to attain perfection because we have failed to develop attachment to him, attachment wherein we consider him to be the lord of our heart; if we have failed to serve him by giving him our full heart in complete sincerity and selflessness, then we have certainly been deprived… we have certainly been deprived.

Although I had my only saviour, the only deliverer of my soul – my only unconditional, true friend – so close to me, due to my bad fortune I lost him. Such is my misfortune! After coming to the bank of the celestial river to collect water, I turned away and headed towards the desert. Even after I discovered a mine of precious jewels, I again became allured by a glass shop, glittering with imitation jewels. What a piteous disaster! Those who are alert and intelligent should be totally determined to live a life of complete surrender to the lotus feet of Śrīla Gurudeva, devoid of duplicity and any type of separate interest, lest they shall certainly be deprived.

Question 2: How can one attain darśana of the Supreme Lord?

Answer: The Supreme Lord Śrī Hari is the original, self-manifest entity. He is the ocean of mercy. When we are inclined to render service, He bestows His mercy and manifests Himself, His form, His complexion, and everything about Him, in one’s consciousness.

The worldly enjoyer is busy with the conception that he is the active agent. All his attempts to attain darśana of the Supreme Lord through his mood of ‘I am the active agent’ will be fruitless. The darśana of the Lord is feasible only through a pure heart, and only by the grace of the process of submissive hearing. No material skill can lead one to have darśana of the Supreme Conscious Being. That Conscious Being can be seen only through the eyes of pure consciousness, through the faculty, or function, inherent in pure consciousness. Only the true servant shall actually see the Lord. The Lord mercifully gives darśana to his genuine servant alone – first, internal darśana; and then darśana wherein He appears directly before him.

Question 3: How long shall the conditioned state of the jīva persist?

Answer: So long as the ānanda-dharma or bhakti-dharma of the soul has not manifest, the living being cannot know himself to be the servant of the Supreme Lord. Until that time, his conditioned state of mind, the conception that he is the active agent, will persist. How can one’s material self-identification disappear as long as his transcendental self-identification has not yet manifested to replace it?

Question 4: Why am I unable to depend completely on Bhagavān?

Answer: As atomic conscious beings, our only nature is to be surrendered – to accept the shelter of the infinite conscious being. If we pay heed to the topics of the external world, we will be unable to place our full faith in the Supreme Lord. Those who do not wish for anything from this external sphere, those who consider themselves most insignificant, and do not seek support from any corporeal object – they alone can repose their faith in the Supreme lord. They alone can truly and completely depend on Him. By faithfully hearing the powerful harikathā that emanates from the lotus lips of the divine saint, he who is living scripture, we can come to completely depend on the Supreme Lord.

Question 5: When will we achieve true welfare?

Answer: Only upon hearing bhagavata-kathā from great saintly devotees, and then following in their footsteps and remaining under their guidance, will we attain true welfare. When one first sets out to engage in pottery, he must initially hear from a skilled potter. Thereafter he can actually begin his work. Before a cook prepares delicious sandeśa (a traditional Indian milk-sweet), he must first learn the recipe and the process from a confectioner. In the same way, if we do not follow in the footsteps of a great, knowledgeable guide, if we try to attain our welfare independently, then we will likely face many difficulties along the path to success. Instead of becoming knowledgeable of the true essence of the revealed scriptures, we will become disciples of our own mental concoctions.

Our only duty is to take shelter of the lotus feet of śrī guru. There are no means to attain the Supreme Truth apart from accepting the path prescribed in the revealed scriptures. There is no possible way for us to attain any form of darśana of the Absolute Truth, apart from bathing in the dust of the lotus feet of the niṣkiñcana mahājanas (great saints whose only possession is Śrī Kṛṣṇa). Only these great personalities can save us from our bhogya-darśana or ku-darśana – our vivid communion with the perceived objects of our own enjoyment, or our faulty perception of the world in general. The real truth becomes known only when we take shelter at the lotus feet of śrī guru, make ourselves his property, and accept service to Śrī Kṛṣṇa as our very life.

Question 6: Is there any other way to attain welfare besides surrendering one’s very self?

Answer: No. The jīva cannot attain complete welfare until he completely surrenders unto Śrī Kṛṣṇa. If Lord Kṛṣṇa does not remain within the scope of my attention or remembrance at every step – while roaming about or while performing any other activity – then I shall definitely be lead down the wrong track.

We will not be benefited in any way if our fixation on “I” and “mine” remains dominant on account of knowledge acquired by our material senses. To be governed by the conception that ‘I am the enjoyer, and this material world is for my enjoyment’, shall lead us to our doom. We are conscious entities, but this material world is an unconscious thing. That which can be enjoyed by us here is known as jaḍa, or inert. We have forgotten our true identity and have become influenced by our false pride, epitomized by the belief that “temporary things are to be enjoyed by me, for I am the enjoyer.” When that pride becomes strong enough, it leads to the misconception that “I am Supreme Spirit; I am God.” The result is complete disaster. When we are overcome by the thought that “I shall become great,” then the path to our spiritual welfare is totally closed.