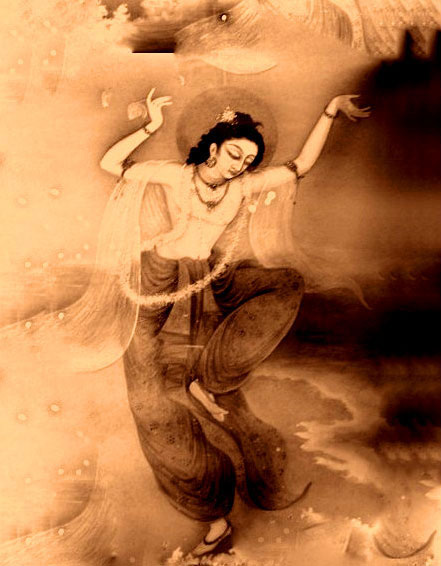 One day, Gadadhara Pandita heard the following words: O Gadadhara! I saw the most extraordinary person on the road to Gaya. His form was very handsome, and He roared just like a thundercloud. His eyes rained tears as if they had become rain clouds, and He rolled about on the ground, His voice choked up in the ecstasy of love of God. All glories to that Lord, the son of Saci-devi.

Oh, what kind of extraordinary state has He attained? Although He is the leader of the scholars, He no longer delights in study. When He holds class, surrounded by his pupils, if He hears the sound "Hari“, He begins to tremble. All glories to that Lord, the son of Saci-devi.

Once during class Lord Caitanya interrupted a pupil and asked, ‘What are you saying? Instead of these verbs, you should constantly repeat the name of Krsna, the most famous of all worlds according to the Vedas. O students, without Krsna, what benefit can verbs give?’ All glories to Lord Caitanya, the son of Saci-devi, who chants His own holy name in that way.

No matter what the particular topic of study was, He would smile and instruct His astonished grammar students in this way: ‘O students, please place the two large eyes of Sri Krsna, which are as beautiful as two lotus petals, within your hearts, and please place His lotus feet within your hearts in the same way.’ All glories to that Lord, the son of Saci-devi.

At other times, the Lord would say, ‘O friend, where shall I go, and what shall I do to attain Lord Hari?’ Who will show Him to Me? Please tell me who will help me in this way’. Speaking thus, the Lord ran here and there and rolled about on the ground. Their throats filled with grief, the stricken devotees called out to Him. In this way the Lord caused His mother Saci-devi, to faint. All glories to that Lord, the son of Saci-devi.

The reflection of the splendid beauty of the Lord is not attainable even by millions of Cupids, and with that splendour the Lord uproots the darkness of the ignorance of the age of Kali. Descending with the principal demigods, the Lord delighted the eyes of the residents of this earth planet. All glories to that effulgent Lord, the son of Saci-devi.

He is like a golden mountain that scatters jewels of pure love of God. Because of His great mercy He wandered on this earth planet. That Lord, known as Visvambhara, the maintainer of the universe, inundated His own universe with the currents of the Ganges river of tears of love of Godhead flowing from His eyes. All glories to that Lord, the son of Saci-devi.

Lord Krsna said to Uddhava: ‘What is the condition of Srimati Radharani now that I have come to Mathura? Please tell me so that I may understand.’ In order to fulfill His own desire, Lord Krsna, the son of the king of Vraja, has descended as Lord Caitanya to taste the mellows of His own devotional service.

O Lord, O son of Saci-devi, O ocean of transcendental qualities, please place in Your abode all who read these eight verses and are full of faith in Your lotus feet. Please accept those readers whose intelligence is pure and who follow in the footsteps of the great devotees headed by Srila Rupa Govami, who are full of great love for You.