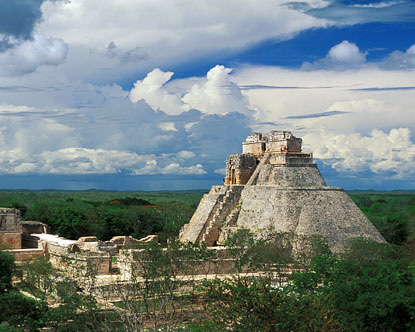 Guatemala's Mayan people accused the government and tour groups on Wednesday of perpetuating the myth that their calendar foresees the imminent end of the world for monetary gain.

"We are speaking out against deceit, lies and twisting of the truth, and turning us into folklore-for-profit. They are not telling the truth about time cycles," charged Felipe Gomez, leader of the Maya alliance Oxlaljuj Ajpop.

Several films and documentaries have promoted the idea that the ancient Mayan calendar predicts that doomsday is less than two months away, on December 21, 2012.

The Culture Ministry is hosting a massive event in Guatemala City — which as many as 90,000 people are expected to attend — just in case the world actually does end, while tour groups are promoting doomsday-themed getaways.

Maya leader Gomez urged the Tourism Institute to rethink the doomsday celebration, which he criticized as a "show" that was disrespectful to Mayan culture.

Experts say that for the Maya, all that ends in 2012 is one of their calendar cycles, not the world. Gomez's group issued a statement saying that the new Maya time cycle simply "means there will be big changes on the personal, family and community level, so that there is harmony and balance between mankind and nature."

Oxlajuj Ajpop is holding events it considers sacred in five cities to mark the event and Gomez said the Culture Ministry would be wise to throw its support behind their real celebrations.

More than half of Guatemala's population of nearly 15 million are from indigenous groups of Mayan descent.

The Mayan culture enjoyed a golden age between 250 AD and 900 AD.