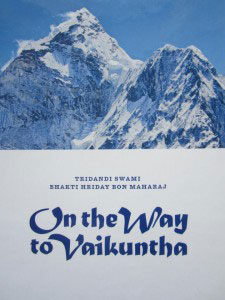 The book you are holding in your hands is unique within Gaudiya or Chaitanya Vaishnava literature. The author, Tridandi Swami Shri Shrimad Bhakti Hriday Bon Maharaj (1901-1982) was one of the leading disciples of the great Vaishnava saint and reformer Shri Shrimad Prabhupad Bhaktisiddhanta Saraswati Thakur (1874-1937), the founder of the Gaudiya Math. Bon Maharaj, born Narendranath Mukhopadhyaya in Vikrampur in today's Bangladesh, dedicated his life to his teacher's mission as a young man, and soon showed himself very capable. After serving his guru in many capacities in India, for example by establishing the beautiful Gaudiya Math temple in Chennai, Bon Maharaj was sent to Europe in 1933 as the leader of a preaching mission. While this mission did not accomplish very much compared to the much later mission of Bon Maharaj's co-disciple Shri Shrimad A.C. Bhaktivedanta Swami Maharaj (1896-1977), at the time it was deemed successful, and Bon Maharaj lectured widely around England and continental Europe.

However, Bon Maharaj's teacher Shrila Prabhupad was not pleased with what he perceived as Bon Maharaj's too independent manner of spreading the message of Gaudiya Vaishnavism. When Bon Maharaj further in 1936 wrote him a long letter critiquing some of the policies of his mission and particularly those of some of his managers, Shrila Prabhupad recalled Bon Maharaj from Europe and expressed his displeasure with him – even though the later history of the Gaudiya Math shows that Bon Maharaj's critique was quite to the point. Bon Maharaj stayed away from the mission until suddenly, on the 1st of January 1937, he received the news of his guru's demise. The events of this book begin some years after this.

The book On the Way to Vaikuntha is a description of Bon Maharaj's pilgrimage to the Char Dham or four holy sites in the Garhwal Himalayas north India. These places have attracted pilgrims since ancient times, and many books have been written about them. Bon Maharaj, however, offers a novel understanding of these places, for which he offers compelling, scripturally based reasoning. He sees them as earthly manifestations of all the cosmic planes of the Gaudiya Vaishnava classic Brihad Bhagavatamrita, and thus considers his own pilgrimage in theological terms, as a journey towards ultimate salvation. Bon Maharaj reasons that if he can see these Dhams, no more will remain for him to see in this whole universe. He will then be able to settle permanently in Shridham Vrindavan, the holiest of Gaudiya Vaishnava sacred sites, and the earthly manifestation of Shri Krishna's highest divine abode.

In practical terms, this means that this book apart from being a travelogue, is also full of scriptural stories about the places that Bon Maharaj visits. Writing for a wide audience, Bon Maharaj does, however, also provide practical information about the journey for the benefit of other pilgrims. Today much of this information is dated: since the new roads that India built in the area after the brief war with China in 1962, most pilgrims will travel by bus and take no more than six days to complete the pilgrimage that took Bon Maharaj two months. No doubt this changes the experience in many ways.

Bon Maharaj is a skilled writer, describing the changing locations and the people traveling with him in colorful and often humorous detail. Still, it is the inner journey that is central to his story. His diaries and published works make it clear that he remained an intensely spiritual person throughout his life, but even so, he would later comment that he had some of his highest spiritual experiences during his Himalayan journey.

In the tradition of Thakur Bhaktivinod (1838-1914) and many other Gaudiya Vaishnava saints, Bon Maharaj freely shares his amazing, mystical experiences – not to showcase himself, but to highlight the mercy of the Lord and His devotees. This is evident from the fact that he also describes the low points of his journey in embarrassingly honest detail. This is what makes this book so unique. Nowhere else have I seen an Indian Vaishnava of Bon Maharaj's standing laying bare his soul in such a manner. His devoted followers may take his weaknesses as illusory, as the lila or divine play of an eternally perfected being, but it is also inspiring to think of them as the human side of an advanced, spiritual practitioner. It offers us the hope to sometime attain the same kind of experiences, even though we may not be perfect ourselves.

As a red thread throughout the inner aspect of the journey runs Bon Maharaj's remorse over what he perceived as his offense to his spiritual master. This remorse drives him towards intense austerities and spiritual practices. Bon Maharaj was a complex personality. While famous for his out-going missionary work both before and after the events of this book, he also had an intensely introverted side to himself. Here he turns inward to such an extent that even though the pilgrimage takes place in 1943, right in the middle of terrors of the Second World War and the Bengal famine, neither is given a single mention in the book. The same holds true for India's quest for independence, though it might be tempting to see Bon Maharaj's comments on the roads of the semi-independent princely state of Tehri Garhwal (acceded to India in 1949) in comparison with those in the directly British-run United Provinces in political terms. While we may not be able to imitate Bon Maharaj's austerities, they do quite clearly show us the importance of determination and intense efforts on the spiritual path.

This translation follows the second edition of the original text. The first draft was prepared by Professor Robin Chatterjee. While his work was meritorious in many ways, not being a Gaudiya Vaishnava, he had misunderstood several of the more subtle spiritual points of the text. He had also omitted many difficult parts. With the help of Ramakrishna Ghosh, Swarup Mitra and Dr. Shanti Ranjan Mukherjee, I edited the whole text, sentence by sentence, filling in the blanks, changing the dating into the Western calendar and making innumerable changes in the language as well. I have also added a few explanatory notes; Tridandi Swami Ramananda Bon Maharaj helped me with many of these. My dear friend Shriman Kamalaksha Dasadhikari (Christoffer Leka) helped me with the graphics. Shrimati Krishangi Dasi (Kaisa Leka) drew the map.

Bon Maharaj considered Vaikunther Pathe as one of his most important works and commissioned a Hindi translation (Vaikunth Path Par) that appeared in 1981. On several occasions, he told his followers that he wanted the book translated into English as well. His spiritual successor as the head of the Radha Govindaji Trust, Tridandi Swami Shri Shrimad Gopananda Bon Maharaj, gave the task to me. It took me much too long to fulfill his desire, but it brings me much pleasure to now finally be able to offer this book into his hands. May it bring as much delight to its readers as working with it has given me.