Construction workers in Bali have discovered what is thought to be the biggest ancient Hindu temple ever found on the Indonesian island, archaeologists said.

The workers were digging a drain in the island’s capital Denpasar at a Hindu study centre when they came across the remains of the stone temple.

They reported the discovery to the Bali archaeology office, which then unearthed substantial foundations of a structure that the excavation team believes dates from around the 13th to 15th centuries.

“We think this is the biggest ancient Hindu temple ever discovered in Bali,” Wayan Suantika, the head of the team, said late Wednesday.

He said the excavation was still in progress and the team did not yet know whether enough stones would be unearthed to allow them to reconstruct the temple.

The excavation team then found what they believe is the foundation of the structure’s 20-metre-long east wing, Suantika said.

The popular resort island is a pocket of Hindu culture in a country with the biggest Muslim population in the world. 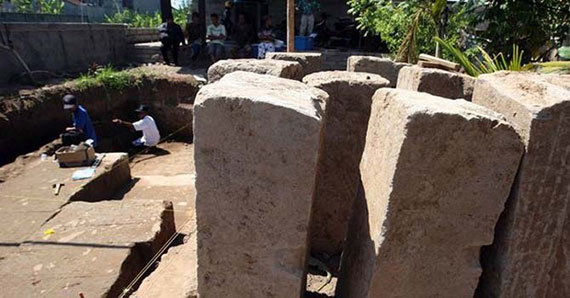