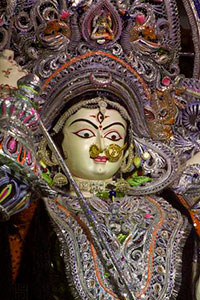 On the occasion of the annual festival of the worship of Goddess Durga, Hindu India has started feeling the pulse of a new national awakening. Grand arrangements for this festival are particularly seen in Bengal. In other states also this festival is observed in a different manner like Candika-navaratri etc. In order to attain victory over the ten-headed Ravana, Sri Ramacandra awoke the goddess for worship and pleased her during the period when the demigods are generally asleep. This Saradiya Puja has such a historical connection.

Although we do not find this episode in the original Valmiki Ramayana, it has been established on the basis of evidence found in the upa-puranas. This celebration has become famous as the Saradiya festival. However, originally this puja occurred during Vasanta (springtime) and was the worship of Vasanti-devi.

Thus, desirous of annihilating their powerful Ravana-like enemies, patriotic Indians enthusiastically feel a fundamental urge towards this act of worship. During this time, the land of the Aryans known as Brahma-varta, which is glorified by sages like Manu etc. celebrates Sri Ramacandra’s victory over Lanka with great pomp and ceremony.

Generally, the Sakta community is naturally the most enthusiastic and takes great pleasure in this festival. But the majority of them are extremely dedicated to the kevaladvaita-brahmavada doctrine of Sri Sankaracarya. Thus, Maya or Sakti, according to their point of view, is accepted as non-eternal; therefore when we analyze this a little deeper, any endeavor to worship her becomes pointless.

Despite the vulgar misconceptions of the Smartas and Saktas, it is actually those whom they consider being averse to the worship of Sakti – namely the Vaisnavas – who actually have faith in the eternal position of Sakti under the guidance of the Energetic, and it is they that show respect for her eternal worship. The Vaisnavas feel honoured to call themselves suddha Saktas (pure Saktas) and they are fully aware that surrender to the service of the highest manifestation of the svarupa-sakti of the Supreme Energetic is the fundamental basis of bhajana.

Some worldly-minded research scholars have taken pleasure in proclaiming that Sri Caitanyadeva, the founder of Gaudiya Vaisnavism, was a covert Tantric.

Those who externally proclaim themselves to be Saktas, display grand arrangements and enthusiasm for the worship of Sakti, but ultimately they desire to merge themselves into the unknowable Brahman who is without any potency; they deny the eternality of Sakti and only accept the non-differentiated Brahman. However, they advertise themselves as Saktas amongst the society of common people who are incapable, inexperienced or disinclined to analyze such subtle topics. Will not those possessing sharo intelligence consider this to be a mockery of fate of this world?

In such a situation, the Bhagavatas that follow Sri Gaudiya darsana are always interested and inclined to help the people of this world to reach a the proper understanding of the sastra.