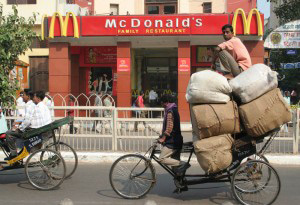 For the first time in its history McDonald's plans to open vegetarian only restaurants and outlets in India. The plan was welcomed by the Hindus in the U.S.

McDonald's plans to open vegetarian only outlets in India near Golden Temple at Amritsar in Punjab and Vaishno Devi shrine in Jammu and Kashmir.

Its menu is said to be about 50% vegetarian in its other outlets in India.

Rajan Zed, the president of Universal Society of Hinduism at Nevada in U.S.A described McDonald's plan as a step in a right direction and told to open such restaurants in other parts of the world also.

He called on other international restaurant chains to launch some meat-free outlets. Zed added that such ideas would help for a healthier world and environment.

Many Hollywood and other celebrities are flocking to vegetarianism for health and ethical reasons.

In 2002, McDonald's agreed to donate $10 million to Hindu and other groups in the U.S. to settle lawsuits that accused the chain of mislabeling French fries and hash browns as vegetarian. The vegetable oil used to prepare the fries and hash browns had contained traces of beef for flavoring purposes.